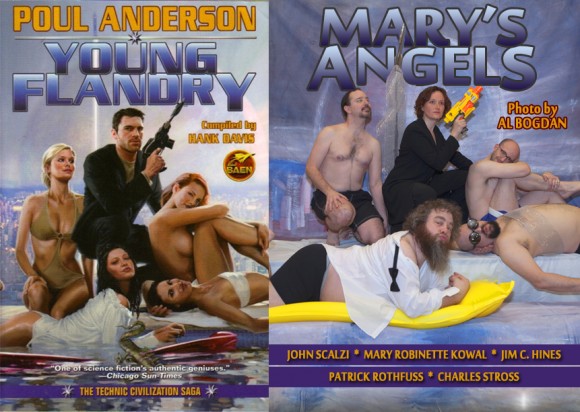 Fantasy author Jim C. Hines has been waging war against poorly photoshopped, exploitative fantasy and sci-fi novel covers for some time now, in the best way he can think of: by taking pictures of himself attempting to emulate the poses on them, and thus highlight and contrast the inherent sexuality that images of women are frequently imbued with against the power that images of men are. This time, however, he’s pulled out all the stops: enlisting three other male science fiction and fantasy authors, and one female one to recreate a cover in its entire.

If you’re interested in owning a high quality signed print of the image on the right for, as Hines says: “your living room, your bathroom, or maybe on your bedroom ceiling. We won’t judge you!” two exist… and they’re both being auctioned off for charity. Check here for updates on both auctions.