If You Jiggle a Dish Just So, You Can Produce a Somewhat Mysterious Star Wave 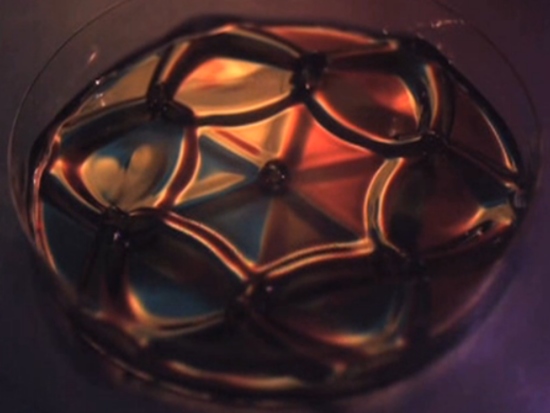 Researcher Jean Rajchenbach and colleagues from the University of Nice Sophia Antipolis in Nice, France, have discovered that if you jiggle a dish just so, silicone oil produces a mesmerizing wave that resembles a star. However, the waves don’t behave quite like we understand waves should.

The team’s jiggle method involves moving the dish filled with the oil up and down in a slow, monotonous motion. The team feels the pattern is the result of three separate waves interacting with each other. The shapes of waves are normally the result of the edges of the container in which the waves are made, but in this star wave’s case, the pattern appears in containers of both different sizes and shapes. Make sure you’re sitting down and prepared to be mesmerized, then check out the video below, brought to us by New Scientist.

Rajchenbach and team are working out a theoretical model to describe the creation of the wave, which Rajchenbach says is “extremely amazing.” They feel the star shape could be related to quasicrystals, which is a pattern that can have odd-numbered symmetrical orders, and will continuously fill up all available space.

Watch the video a few more times, and if you’re interested to see if the team found an explanation for the beautiful wave shape, check back with the American Physical Society on November 19, when Rajchenbach and team will be presenting their findings.