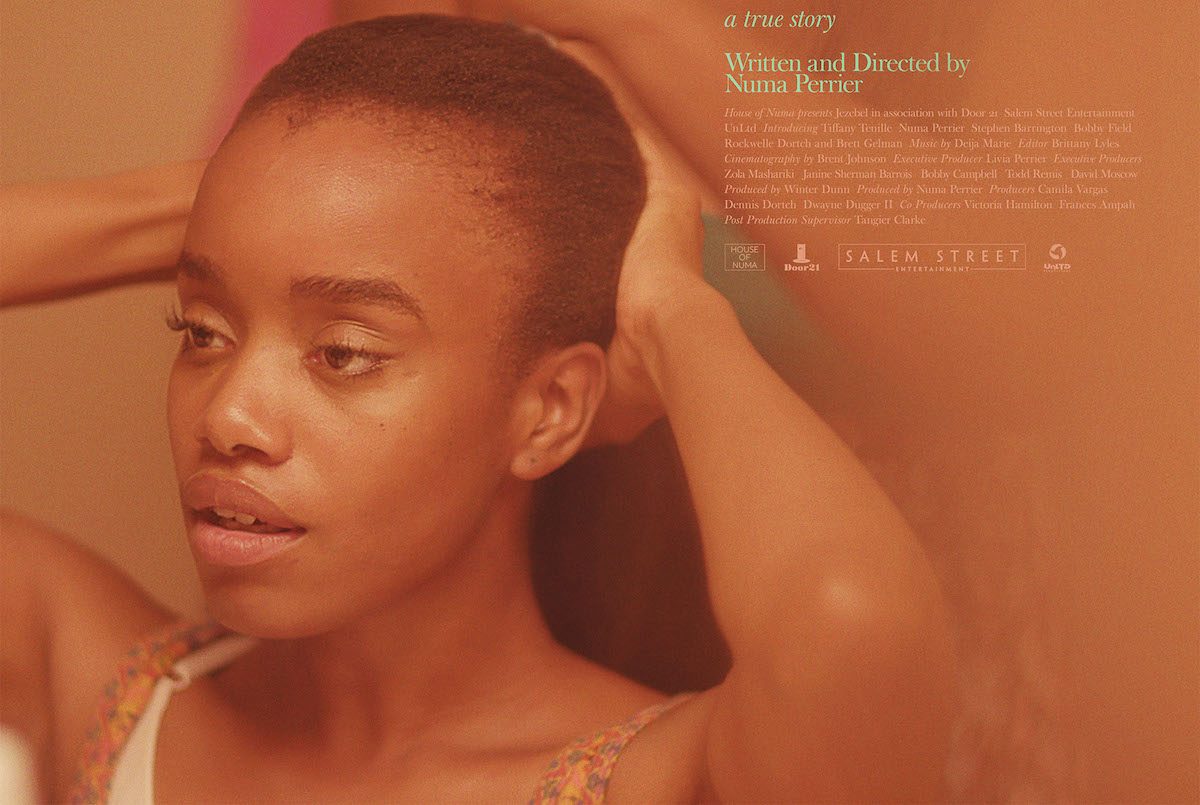 Jezebel is a sparkling debut for director/screenwriter Numa Perrier, which its SXSW premiere crowd acknowledged enthusiastically. The film deals with themes many will find unsettling. That’s unfortunate, because there’s no reason to be uncomfortable with sex work.

As America enters an era where online sex work has become increasingly unsafe, movies like this are refreshing. It’s not just the topic of sex work that makes it so unique, but that it’s a semi-autobiographical look into Perrier’s life as a sex worker, told from the Black fem perspective—and the level of normalcy with which the profession is documented—that makes this movie so special.

It’s not an educational piece or here to teach anyone about anything. It’s a look into the experience of a young woman who is discovering her sexuality and the impact of female empowerment.

Tiffany (Tiffany Tenelle) lives in a cramped one-bedroom apartment with her older sister Sabrina (Numa Perrier), her boyfriend David (Bobby Field), brother Dominic (Stephen Barrington), and younger sister Juju (Rockwelle Dortch). Sabrina is the only one with a job and supports the family as a phone sex operator. Tiffany spends much of her time caring for her terminally ill mother, and when her mother dies, that leaves her without direction.

Exhausted by the strain of being the only one working, Sabrina presents her sister with a job opportunity: a small startup is looking for internet cam girls paying 15$ an hour. Tiffany doesn’t scoff at the idea of cam work, eager about the opportunity instead. She shows up to a hole-in-the-wall office run by a skeezy character named Chuck (Dennis Jaffee), who does all the hiring. Her interview consists of stripping naked (which she does, but reluctantly). She’s told to shave, is quickly hired, and assumes the online identity of Jezebel.

She sees success quickly enough that she’s able to move out on her own, but that success doesn’t come without pitfalls. Tiffany is the only Black woman at the cam company, and other cam girls become jealous as she gains more money and repeat clientele.

Their apathy is on display when Tiffany is called a racial slur during one of the chatroom sessions. Her colleagues tell her to “get a thicker skin” because the customer is always right—but Tiffany is no pushover. She’s a sweet young lady but isn’t afraid to advocate for herself against her boss, and anyone else who tries to convince her she should take mistreatment to keep her job.

There are so many elements to celebrate in Jezebel: the sincere and unapologetic performance by newcomer Tiffany Tenille, who nails the demure portrayal of a woman on a path to self-discovery, her nonchalant attitude and acceptance of sex work is a form of normalization, because it’s honest work.

Entering this career field is even more advantageous when you have a strong support system. Sabrina is encouraging and compassionate, because she understands that the type of work doesn’t define who you are as a person and consistently reminds Tiffany of this.

The men in the family don’t like the jobs Tiffany and Sabrina do, but they also don’t discourage them either. While that isn’t a huge leap forward, it’s still fresh to see men having little to no involvement in how these women choose to stay employed or what they do with their bodies.

Numa Perrier took a lot of risk with Jezebel. There are no cheap movie tricks or special effects, just impressive cinematography and lighting to evoke sexual tension, and a solid story to carry the film from one plot beat to the next. For a first-time director, there is great confidence in her presentation, and it shows. However, can you blame her? She has lived a life unique only to her and should be the only one to tell her story, and it’s hard to think of anyone who could have done this justice.