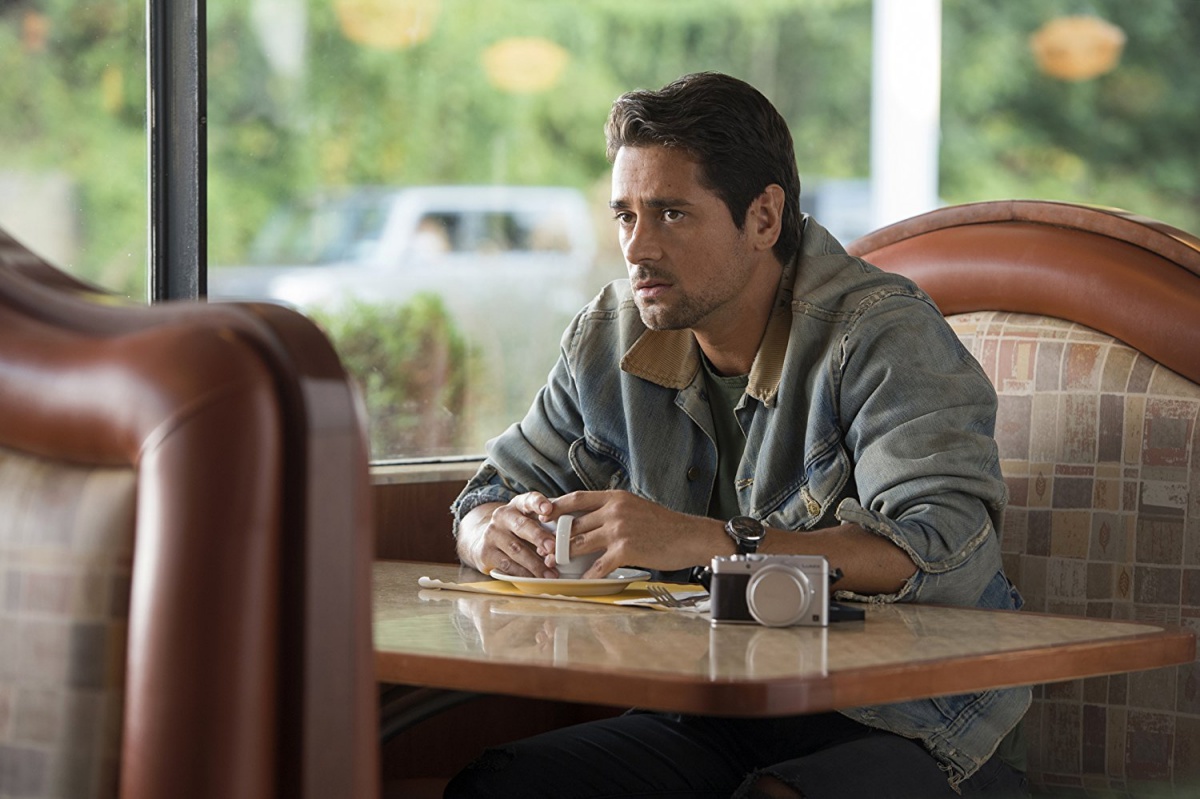 Season Two of Jessica Jones is a bit of an adventure so far. I’m still processing how I feel about it, as I have a handful of episodes left, but there is one scene that is really sticking in my craw.

In Episode 3 of Season Two of Jessica Jones, “Aka Sole Survivors,” we see a conflict between Jessica and her building’s super, Oscar. Oscar has a small son and is in the middle of a custody battle, so he decides to evict Jessica because he sees her as dangerous. He ain’t all wrong, but that’s not the point.

Before I rant, let me give some context. Jessica was trying to protect a client, and he was murdered right outside of the building in front of Oscar and his son, who walked by and saw the body. The police go to Jessica to ask her about her role in the event, and when she goes to Oscar for backup, he lies and says he didn’t see her. Jessica is pissed off. When she returns from the beginning of a season-long ‘save Trish from herself’ arc, she returns to find out that she is being evicted. Jessica goes to confront him, and this is the dialogue exchange:

Oscar: Watch your mouth around my kid.

Jessica: Oh, like his bigoted father is some shining role model?

Oscar: You’re the one breaking the law.

Jessica: You were all smiles, checking out the neighbor until you saw that I was different. That’s called prejudice.

Oscar: You’re not a protected class.

The writer of the episode is series creator Melissa Rosenberg and with all due respect to her and the show, things like this enrage me.

Malcolm and Jessica later do some digging and find out that Oscar is an ex-con who went to jail for felony check forgery. When Malcolm asks how Jessica knew he was an ex-con she says:

“People don’t usually panic at the sight of cops unless they’ve ridden in the back of the cruiser.” At this point, it would have been perfect for Malcolm to say “unless they are black, brown, trans, gay, or suffer from multiple kinds of mental illnesses.” This is NYC, the city of Stop-and-frisk. Instead, they just find a way to figure out how to use this information to get what they need.

I have no problem with Jessica not understanding these things. If anything, her lack of empathy as to why a visibly brown man would not want the cops at his door in connection to a murder, shows us as an audience how privileged she is. However, that’s why other characters, like Malcolm, exist.

And look, I get it. For years, comics like X-Men have used mutants, Inhumans, metas, whatever you’d like to call them, as metaphors for Civil Rights as a way to create empathy. But here’s the thing … racism is real, and real people are affected by it. Years of using comics and science fiction to teach people how not to be racist, if you look at any comic book forum ever, will show you … it’s been a failed effort. 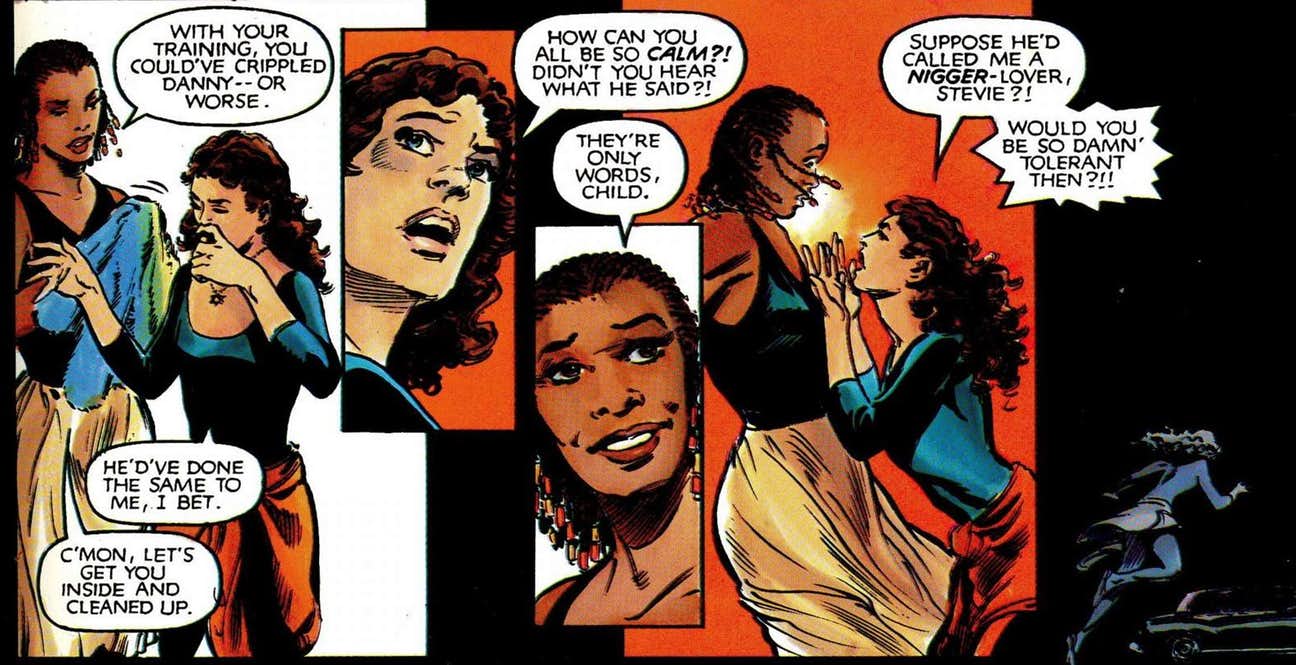 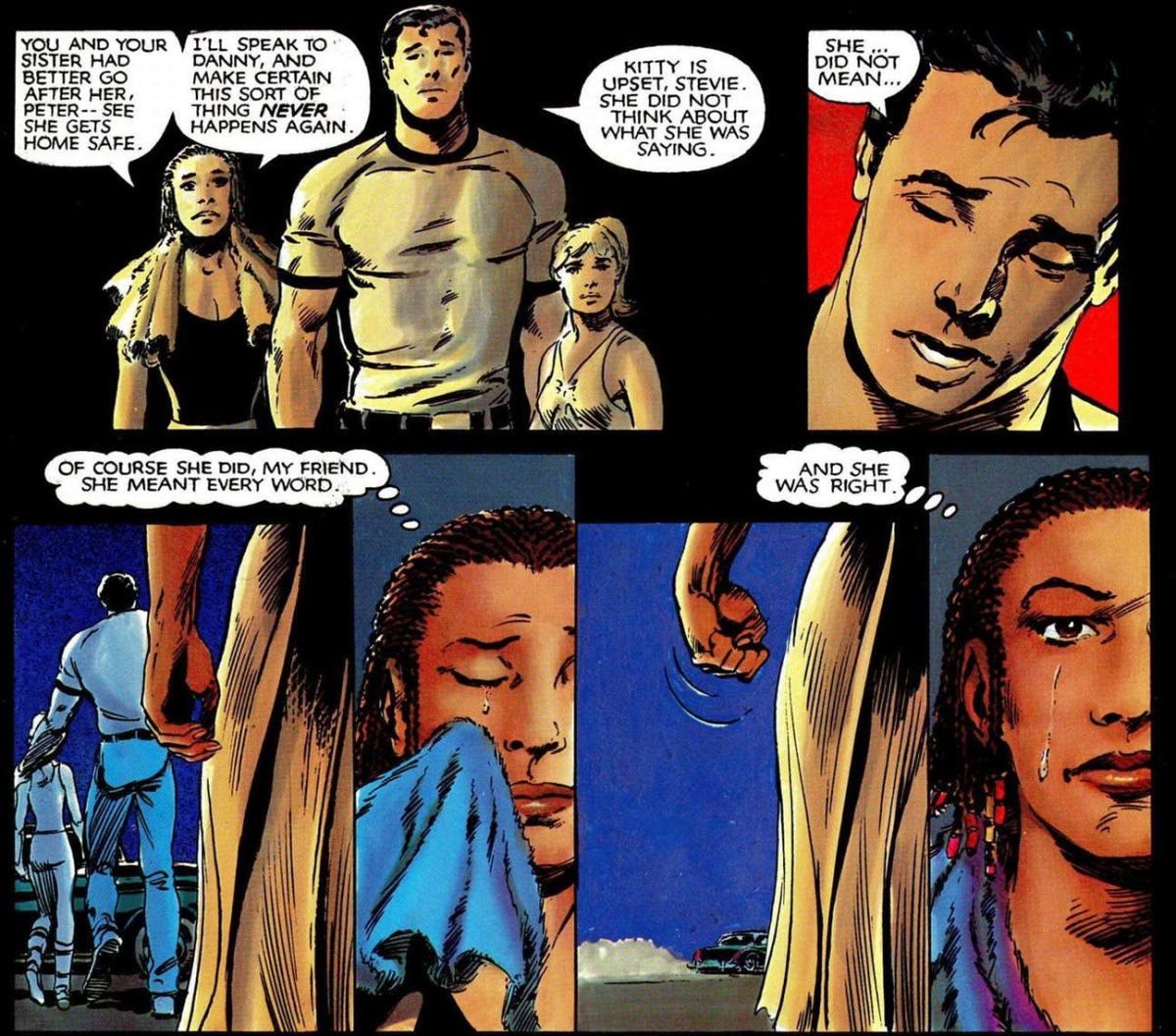 Chris Claremont really knew to push an idea, and while was working with the best of intentions, this kind of stuff is very tone deaf if you are a brown/black comic reader.

Yet I’ve seen show after show do it, from True Blood to Defiance. And in every one, it ends up being people of color versus white vampires, aliens, or whatever a show would rather have stand in for POC than actual POC. It’s often exhausting, and not just because watching a white actor preach about bigotry and racism to a brown actor is irritating. What I find more upsetting is that the characters who are mutants, aliens, super-powered, or whatever, get to be more militant and angry than characters of color.

Jessica Jones has failed really hard these past two seasons with having women of color in the show (which we’ll have a post about tomorrow), but for the men of color that do exist in the show, they live in service to white women. A lot of the time, shows—especially shows like Jessica Jones and to a degree, Supergirl (although oddly enough Supergirl is much better than Jessica Jones overall in this issues)—ignore the complexities of gender and race when it comes to white women and non-white men. I mean … we all saw Get Out, right?

So to see Jessica walk around using her whiteness to harass and essentially break into Oscar’s house leaves a bad taste in my mouth. Not just because she does it. As a character, Jessica is allowed to be a bad person and have blind spots when it comes to race; it’s up to the writers, however, to address it in the show. That’s especially important since so much of Season One was about the power people can have over you and how it can be abusive. Jessica may not have mind control powers, but her ability to navigate spaces the way she can is because she’s a white woman. That’s her other power on this show. Therefore, when you have her saying “you people” to black women and calling Latino men bigots for being suspicious of a super-powered person … That is levels of tone-deaf that we don’t need.

While I am still finishing up my quest into Jessica Jones land, I am hoping that if not by the end of this season, by next season there will be some more nuance—especially since Aida Mashaka Croal, who was a producer for Luke Cage, wrote multiple episodes (Episodes 2 and 10) of this show. Either way, for Jessica Jones to be the progressive show it wants to be (and it definitely wants to be), it needs to do better at handling these simple things.