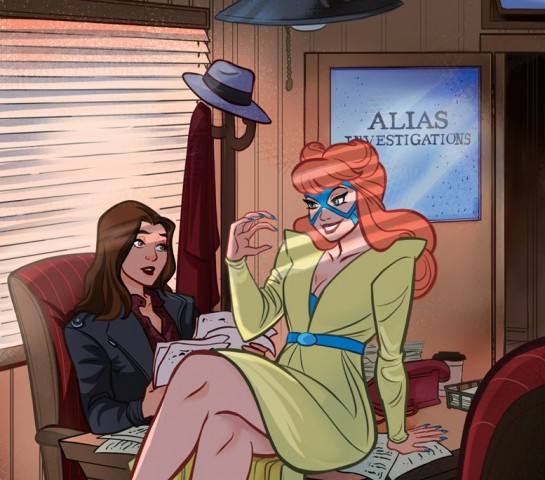 There’s so much to love about Kate Leth and Brittney Williams’ Patsy Walker, AKA Hellcat–not the least of which is the fact that it brings one of my favorite comic book characters back into her own series with an unadulterated joy and excitement from both the creative team and the fans alike. It was announced at C2E2 yesterday that Jessica Jones will finally be making a cameo in the Hellcat series in June, popping up in issue 7–but she and Patsy won’t exactly be friends yet, if the title of the arc is any indication.

In an interview with Newsarama, Leth talked about the “Best Frenemies” arc, which sees Jessica Jones and Patsy crossing paths while Jessica is working on a case. The two characters were played brilliantly in the Netflix Jessica Jones series–with “Trish” Walker (as she’s known there) cited as one of the show’s MVPs–but will their friendship be just as strong in the comics? Time will tell, but Leth says the “Best Frenemies” title may not necessarily apply to Jessica and Patsy–especially when Patsy also has her old rival Hedy to contend with.

As for whether or not the Jessica Jones TV show influenced the meeting of the characters in the Hellcat comic, Leth says she did draw some inspiration there:

There’s definitely an influence. I love Kristen Ritter’s dry sarcasm and vulnerability as Jessica Jones, so those elements are reflected in her appearance in Hellcat. As for Rachael Taylor, I definitely tweaked some bits of Patsy after watching the show because Rachael is just so incredible, but comic Patsy’s attitude was already pretty well-established. Obviously our comic is a very different animal than the TV series, so it’s all about picking the bits and pieces that work in our world.

Are you looking forward to Jessica’s official return to the comicsverse in June? Are there any other characters you’d like to see pop up in Hellcat? And who else is enjoying this series just as much as I am?