This Is Not Jesse Eisenberg’s Hair In Dawn of Justice

This whole post is an excuse for the Photoshop under the cut. I won't lie.

just met jesse eisenberg from the social network and had a conversation with him coolpic.twitter.com/6n12xuZNDE

As GammaSquad points out, this is pretty clearly a wig Jesse Luthorberg is wearing in this fan encounter pic, either to cover his bald noggin or whatever other hairstyle Gen Y Lexypoo will have in Dawn of Justice. Snyder & co. are not playing around with the secrecy here. Wait, does this mean Eisenberg has to wear a wig every time he goes out in public while filming his part of Dawn of Justice?

Don’t disappoint me, Jesse. You know what to do: 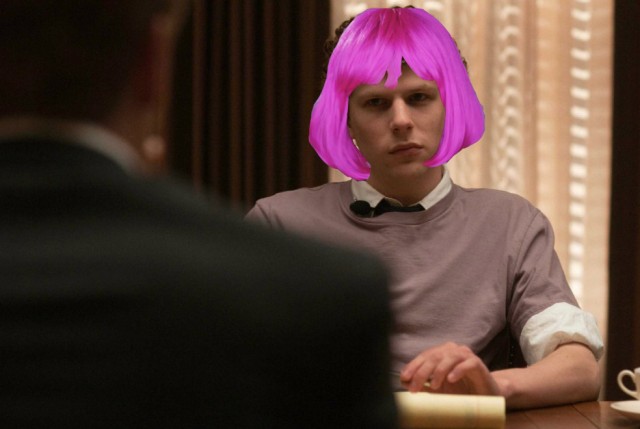 Here’s the closest we’ve actually come to seeing what his hair will be:

So now let’s all go back to making stupid Photoshops now, k?