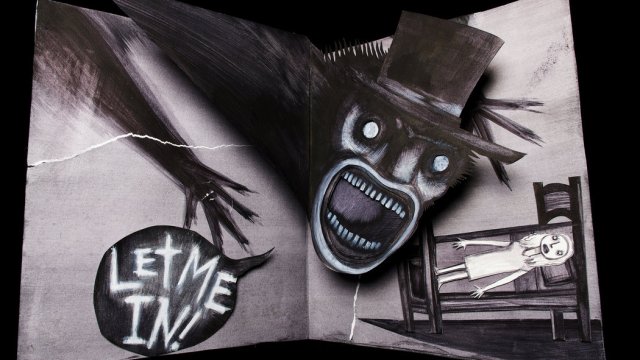 Australian import The Babadook, from Jennifer Kent, is one of the most original horror movies in years, and one of best films of 2014. Out this weekend in select theatres, actress-turned-writer Kent dug deep into her psyche for this film to tell the story of a child’s fear of monsters under the bed with the horrifying concept of a mother driven to hurt her own child. Played by the fabulous Essie Davis (deserving of awards talk for her emotional take on the classic scream queen) and child star Noah Wiseman, Kent has crafted a funny, emotional, and terrifying tale of terror that feels simultaneously fresh and old-fashioned. Kent spoke by phone from her home in Australia with The Mary Sue contributor Lesley Coffin about creating this brilliant piece of work.

The following interview contains only very mild spoilers for The Babadook. Look for our review of the film tomorrow morning.

Lesley Coffin (TMS): One of the first questions I wanted to ask you about is the little boy Noah [Wiseman] (Samuel), whom I understand you discovered. How did you find him?

Jennifer Kent: He really is extraordinary, because he was playing someone very different from himself; which, for a six yearold, is an incredible accomplishment. He was found by our casting agent who looked all across Australia to find a little boy, and she has a lot of experience casting children. But it is never easy and there were probably 400 to 600 little boys she saw, and I saw about 100 of those on tape, and then we started to go in and improvise with some of them. And that was when it became very apparent that Noah would be the boy, because he has a mix of sensitivity and being emotionally robust, which is perfect for the character of Samuel. 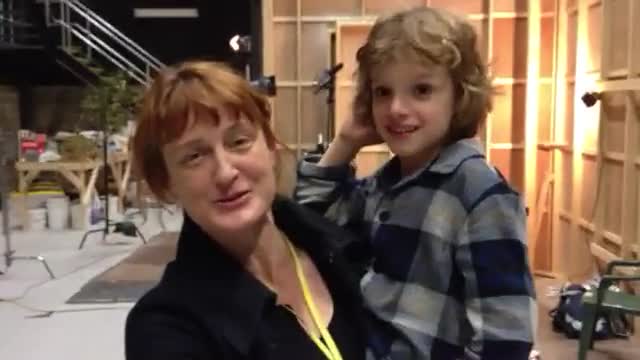 TMS: Noah and Essie [Davis] (Amelia) have a great chemistry on screen as a mother and son. How hard is it develop that family relationship on screen between two strangers, especially a little boy who has never acted before?

Kent: I am an actor, so I knew we couldn’t just bring them together on set, particularly when one is an adult and one is a child. It was very important to develop that relationship in a way that would benefit Noah, and ultimately benefit Essie as well. I mean, Essie could walk on stage and have chemistry with anyone, she’s that experienced. But not so with Noah. So I took Noah aside for two weeks before we started shooting and got Noah comfortable enough to trust me. And I told him the kid-friendly, less scary story of The Babadook. And he came to know who Sam was and he knew his role in the story. And it gave him a lot of responsibility and he felt very important to the film, which he is, which is so important when working with kids. And so, once we had a week together, I brought Essie in. And we didn’t work on the script, because that needs to be as fresh as possible, but we just played games and had Essie play his mum. And I had to give Noah permission to be naughty and be disobedient. Because kids always want to please adults, especially adults that aren’t their parents. And so it was a process for him to learn to be naughty, and understand why he could be naughty.

TMS: I always find myself worried for little kids in horror films because of how scared I get. What did you do to make sure Noah wasn’t scared on set?

Kent: He was never scared by the story and we always made sure that he wasn’t scared or traumatized. His mother is a child psychologist, and so we worked really hard to protect him. And she felt this was a really important film for women which needed to be told, and she was very supportive. And Essie and I protected Noah on set as well, and he had an adult stand in, so whenever Essie needed to let it rip in some of those really terrible scenes opposite Samuel, it was an adult actor she was working with.

TMS: The movie and monster elements are creepy, but the most disturbing idea in the film, and reason it haunts audiences after seeing it, is the idea of a mother being driven mad and unable to stop herself from wanting to hurt her child. How difficult was it for you to get into the frame of mind that you could even write a movie like this? 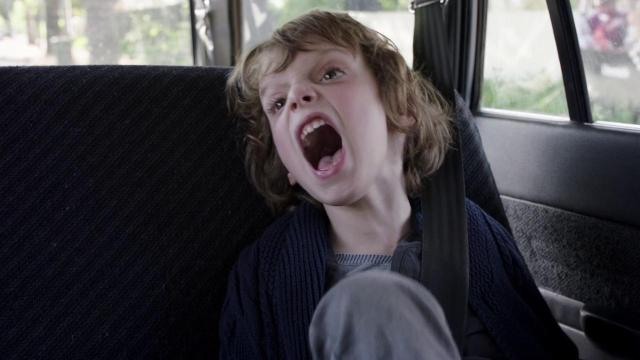 Kent: I really had to go there in my mind and try to have compassion for a person like that. Often when you hear stories like that about parents killing their kids or murder-suicides, immediately we think they are monsters. And yes, it is an awful abomination to do that, it is terrible, but I was trying to understand how someone could get to that state. And trying to elicit compassion. And with the character of Amelia, it wouldn’t have worked for the story if she started out as just some kind of crazy woman from start to finish. I really wanted audiences to feel for her, go on the journey with her, and not make judgments.

TMS: It’s especially hard to watch Essie, because she spends so much time being scared of becoming that woman, like a person who is trying desperately to stop the car before the crash.

Kent: It is a very hard part to play, and a very brave role for Essie to take. Because all actors want to play roles where people think, that is a great, brave noble person. But for both Essie and I, we wanted to show the real human being, a woman drowning in her situation. And I think both of us, me in the writing and her in the performance, it was all about having compassion for that person. And it was something where I thought, I’m going to get a lot of criticism for this character, but I’m prepared for that. But I’ve actually experienced the opposite and met a lot of women who have told me they were relieved to see this woman and told me it’s helped them make sense of their own feelings of inadequacy as a mother and fear of never being good enough. Because most mothers I’ve met, secretly they never feel like they are good enough.

TMS: You definitely addressed the fear of motherhood in a way I haven’t seen before.

Kent: I don’t have children myself, but I’m always amazed by the lack of information available to mothers about how they will feel and how hard it will be. Its taboo to even talk about it. A lot of women don’t cope and find that it isn’t an automatic given that they’ll bond with their child. It wasn’t the main thing I wanted to explore with Babadook; I was more interested in exploring the suppression of darkness and trying to face darkness. But it is certainly became a main thing, and byproduct of it, because women are constantly being told they have to be loving and nurturing and that that is their role. And motherhood is the primary example of that role, but it isn’t always easy or natural.

TMS: The movie also addresses the impact grief can have, as it is still such a heavy burden on Amelia. And I remember rearing that most people take an average of seven years to truly move on from the grief of losing a loved one, and the movie is leading up to the seven year anniversary of Amelia losing her husband.

Kent: That is interesting to hear, and I think that makes sense. It seems most people give individuals about two years to grieve and that seems unrealistic to me. But the number seven has always been important to me. And the age of seven was important to me because that is when a child starts to develop ideas of their own which don’t automatically mirror their parents. They still worship their parents of course, but that is the age when kids start to become their own person, and that was important for the character of Sam. 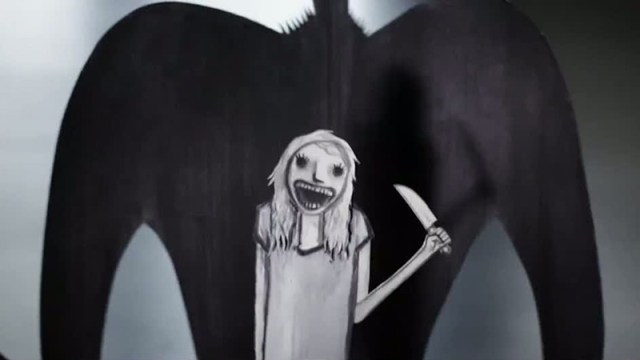 TMS: The image of the Babadook is so bizarre and weird. How did you even think of the design?

Kent: It was very much the opposite of an intellectual decision for me. If something felt right, I would do it. I don’t mean I was just haphazardly slapping things together, it was a far more emotional process. I don’t know why silent and black and white cinema felt relevant to me, but it did, so that was an influence. And then there was the pop-up element of the book I needed to incorporate. It all had to be childlike, so the Babadook itself had to have a childlike layer of seeming benign and harmless at first and then as the story progressives, it became a far more adult fear.

TMS: Even the name has a childlike element, because when you first say “Babadook,” you kind of laugh.

Kent: What you said there is exactly what I was hoping for. I’m not scared when people say, “what is the Babadook, sounds like a stupid name to me.” I’m like, yeah it is a stupid name. It is the name of a child’s monster and it is only through the playing out of the film that it becomes something very adult.

TMS: There are a lot of movie clips in the movie when Amelia is watching television at night and they all seem to play into the story. How did you decide what to use?

Kent: Well, we were driven by budget of course. There were a few I really wanted to include but just couldn’t afford. And I actually played for The Barber clip out of pocket because I didn’t want anything else in there, and it was not cheap. But besides all the budgetary stuff, the TV clips were about what Amelia was going through and it really needed to closely link to what was happening in the story. And it was a huge job finding the right clips. But it was very important to me that we selected clips which didn’t just work in the film, but reflected her state of mind as the film progressed. Because for me, that TV is like another character. And I loved the idea that this used to be her outlet to escape, because that is why we all watch TV.