Jazmine Sullivan Adele and Race in Music | The Mary Sue

Jazmine Sullivan, Adele, and How Black Soul Artists are Received 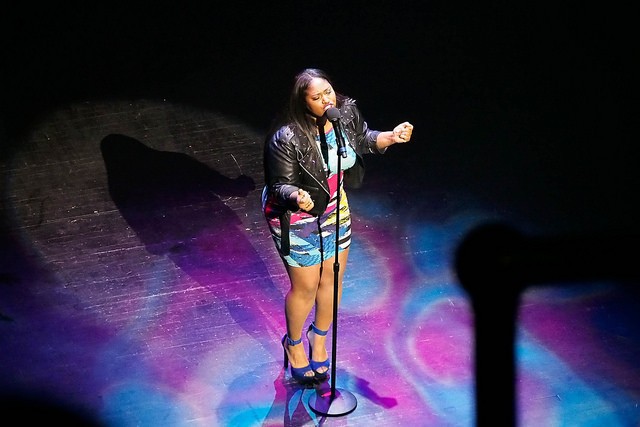 Jazmine Sullivan is a class act, an awesome singer, and she’s also been nominated for a Grammy eleven times for her past three albums. And yet, some of you who aren’t deep into the R&B/Soul scene might not have ever heard of her. But I bet you’ve heard of Adele.

In an interview with the Associated Press, Sullivan reveals that she understands how race may be a factor in how she is received, but she refuses to let that dictate her self-worth. Instead, she focuses on the people who do connect with her music:

I guess I’m glad that people are recognizing me in some way, and kind of see there’s a little injustice in how black soul artists are received. But, at the same time, I try not to focus so much on the negativity.

She stepped away from the spotlight for a bit (much like Adele did), and performed live for the first time in that time at the 2015 Soul Train Music Awards in a tribute to Babyface. It’s clear she’s got talent, and last year she (like Adele) released a new album called Reality Show, which she wrote during her hiatus.

Despite what the rasp in her voice might suggest, Sullivan clearly sees herself as something other than R&B’s next great queen of pain. Her central themes—love and self-image—don’t stray far from genre convention, but her musical versatility and keenly observed characters make her one of the most captivating artists in R&B today.

And yet, you can’t leave your house without hearing Adele’s “Hello.”

It’s not about Adele not being talented. She clearly is. It’s about white artists being able to go further with black music than black artists are able to. It’s about whom record labels, music publications, and other music media choose to promote – or not. It’s about artists like Sullivan being relegated to the R&B categories at the Grammys, while Adele’s soul sound competes in the Best Album categories.  To be clear, Adele wasn’t nominated for the Grammys this year, because her album came out too late to qualify, and they stuck to their deadlines – unlike the BRIT Awards. We’ll see what categories 25 gets nominated in next year.

It’s frustrating to see how white artists are praised for singing or drawing from black music, but when black artists share their singing gifts with the world, it’s taken for granted. It reminds me of how cooking and styling hair is “women’s stuff,” until men decide to do it, and then it becomes “elevated” and male-dominated with names like Gordon Ramsay and Paul Mitchell becoming million-dollar brands while women are expected to be home cooking for their families for free.

You can’t cherry-pick aesthetics and talents from a culture and a community and then leave them out of  the equation when it’s time to cut checks.

Then again, Adele may be the beginning of the end for the old-school music business anyway.

As we all know, she does not stream her music on Spotify (she doesn’t have to! She’s Adele!), and she’s one of the last Stars the music industry is holding onto to validate their ever-less-relevant business model. Music writer Bob Lefsetz has talked a lot about Adele and how, it isn’t that she’s so super-talented, it’s that so few artists are exceptional anymore. He also sees her career as the swan song of a dying paradigm:

Adele, you could have done good here. You could have driven listeners to streaming services, you could have bumped up subscriptions. Instead, you’re just muddying the water. Keeping people in the past. Where the media is, which will say how much product you sold as opposed to how much people accessed.

If you think sales are where it’s at, you don’t know Major Lazer and DJ Snake’s “Lean On” is the most played track in Spotify history, with 526 million streams in eight months. Not only is there money in that, there’s cultural impact. “Lean On” gets little press, but actual listeners know it’s genius and can’t get enough. Whereas you’re appealing to doofuses who don’t listen, just blindly buy because the oldsters tell them to.

So perhaps, at the end of the day, it’s the Sullivans of the world who will have the last laugh, because we now live in a world where it’s all about playing to your niche, and the “mainstream” (whatever that means anymore) matters less and less. Sullivan is more focused on fans than album sales:

The tours were sold out and I just felt so much love. I don’t get too much into album sales and anything like that. What I do tend to do is, if I go to a show, and it’s sold out, and if people are singing the lyrics to the songs, that’s the kind of stuff that makes what I do so great.

Systemic racism affects every industry, so it’s no shock that it’s ripples are felt in music, too. However, perhaps Sullivan and other black artists like her can take advantage of the fact that the old-school music industry is eating itself alive ouroboros-style and thrive in the new music industry that’s less about mainstream media telling you what greatness is, and more about the songs, the artist-fan connection, the music. The music industry hasn’t really been about the music in the 21st Century.

What’s funny is that, when it was, black artists were mainstream and all over the place. Your Whitney Houstons, your Babyfaces, your Boyz II Mens. Watching Sullivan sing in tribute to Babyface, I thought to myself Damn, remember the 1990s, when a bunch of black people were on TV, and the radio, and in movies, and you couldn’t turn around without seeing black people doing really cool stuff? Remember watching Martin and In Living Color on TV, then turning the radio on to hear Toni Braxton and SWV, and then going to see Bad Boys in theaters?

What happened to all that momentum? How did we backslide?

(via Hello Beautiful, image via Siris/Flickr)