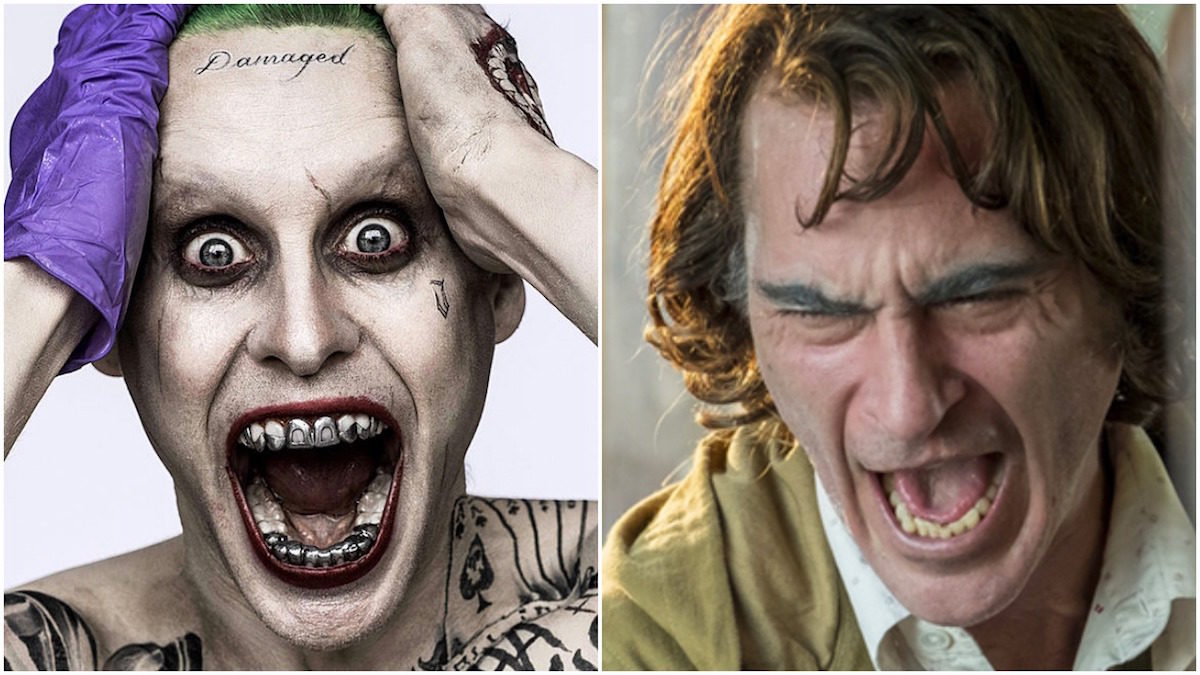 Academy Award-winning actor and nobody’s favorite Joker, Jared Leto, apparently demanded that Todd Phillips’ Joker get the kibosh, and may have launched such a petulant pushback to the rival Joker that he switched management as a result. I imagine this news is not surprising to anyone who has followed Leto’s career in the past.

According to a lengthy story in The Hollywood Reporter, Leto was incensed by the advent of the Joaquin Phoenix-starring Joker. For those who have excised the scenes from their minds, Leto played Joker for all of ten minutes in DC’s Suicide Squad after most of the role was cut in post-production. His on-set disruptive “method actor” antics as the Clown Prince of Crime became one of the biggest news stories around Suicide Squad, which did not, apparently, thrill the studio or director David Ayer.

THR cites sources that say Leto was “alienated and upset” when Todd Phillips’ independent Joker film got the greenlight, and his “frustration that Warner Bros. was moving ahead with the Phillips project was so great early on that he tried to throttle the rival Joker in its cradle.” How did he go about doing that? He seems to have demanded that his people call a bunch of other people.

According to sources familiar with Leto’s behavior, when the Oscar-winning actor learned of the Phillips project, he not only complained bitterly to his agents at CAA, who also represent Phillips, but asked his music manager, Irving Azoff, to call the leader of Warners parent company (it’s unclear whether it was Time Warner’s Jeff Bewkes or AT&T’s Randall Stephenson, depending on the timing). The idea was to get Warners to kill the Phillips film.

Needless to say, this appears to have been a lot of inside Hollywood baseball that didn’t end up scoring any home runs for Leto. The Phillips Joker went forward and has been a massive success, garnering critical acclaim and a box office approaching $700 million, which puts it past Justice League and Logan.

A fascinating bit from the THR story is that Warner Bros. wasn’t even excitedly championing Phillips’ Joker, and gave the film a small budget in the hopes that it might not get made at all. This was a serious miscalculation on the studio’s part, but the best calculation by all involved was to make a standalone Joker film that had nothing to do with Jared Leto, despite rumors that one would be made featuring the “actor-rocker.”

Why so cranky about Jared Leto, you ask? The actor’s rumored behavior has never been stellar, but it was really those abrasive Suicide Squad pranks that set my teeth on edge. Amongst other delights, he “gifted” Harley Quinn actress Margot Robbie a live rat (which, in the best twist, went to live with Guillermo del Toro), sent bullets to Deadshot actor Will Smith, and presented the whole cast with a dead pig. Ha … ha! Leto was trying to “‘invent’ a place for himself in it backfired,” according to THR, which declares that Leto’s time as the Joker is almost certainly past. He’ll not appear in Birds of Prey or James Gunn’s take on The Suicide Squad.

It’s particularly frustrating that Leto went so over-the-top with his edgelord Joker antics, because his gold-toothed, tattooed, creeptacular menace ended up with none of the deep pathos of Heath Ledger’s transformative turn, Jack Nicholson’s iconic take, or Phoenix’s unique spin. I hope Leto is ruffled forever by going down in history as the most forgettable and most-maligned Joker. Think I’m being too hard on Leto? Quoth THR:

Meanwhile, Leto’s unhappiness over the Phillips project seems to have helped end an already strained relationship between Leto and CAA. Sources say the actor felt his agents should have told him about the Phillips project earlier and fought harder for his version of Joker. Sources say Leto told his agents that they should stop the rival project, arguing that he wasn’t being treated properly as an Oscar winner (for Dallas Buyers Club). But a person with first-hand knowledge of the situation contends that by then, Leto had burned through four different teams of agents at CAA and there was little love for the actor there.

So there you have it. The guy who won a 2014 Academy Award for playing a trans woman in Dallas Buyers Club—a role he should never have been cast in—was reportedly throwing his weight around over not being “treated properly as an Oscar winner” and had gone through four whole teams of agents at his old agency. Sounds like a charmer. All in all, DC/Warner Bros. seems to have dodged a bullet in not having Leto onboard as Joker for the long haul.

I’d like to believe that we’ve evolved as a society and in the entertainment industry enough since Dallas Buyers Club that, if it were being made today, Leto would not be cast in the role that won him Oscar gold. Then we’d never need to hear the words “Academy Award winner Jared Leto” ever again.

In conclusion, I stand by my assertion tweeted last spring.