Finally the perfect diaper for your ro-butt. 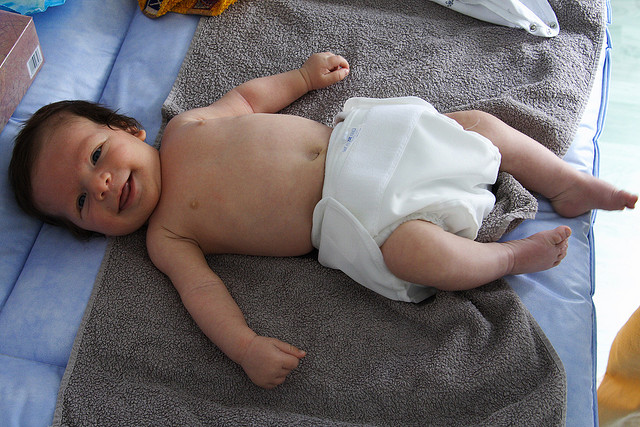 Professors from the University of Tokyo will be unveiling a new organic sensor at an academic conference in San Francisco this week–which means a lot of very smart people will be spending their days discussing diapers, and with good reason. Although the tiny “talking diaper” sensor may look flimsy, it could change the butts of babies and beyond.

Professors Takayasu Sakurai and Takao Someya lead a University team in developing the prototype, an organic disposable electronic sensor designed to give caregivers the dirt on what’s inside diapers. Here’s Someya, holding up his invention and  looking way happier than most people do about diapers. 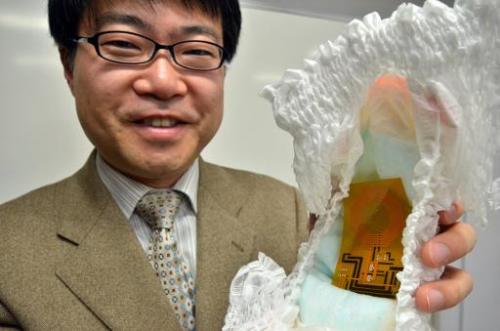 The flexible circuit is composed of just a simple piece of plastic that receives and transmits diaper deets wirelessly, giving caregivers the down-low on the diaper’s wetness, temperature and pressure.

Developing a diaper that tells you when it’s dirty may seem like a waste to Western ears, since babies are usually pretty good about telling us when they’re pissed, and noses are a helpful indicator of a crappy nappy. But if you think the diaper sensor is full of shit, then Phys.org says you’re not taking into account the “rapidly aging” population of Japan.

As Phys.org says, not only will the sensor tell you if the source of your baby’s hysteria is scatological without, as Someya puts it, “unclothing him or her,”  it can also let caregivers know when an “adult nappy” on a less communicative person needs to be changed. Says Someya, “if sensing is done electronically, you can tell simply by coming close to the wearer.”

So a “talking diaper” isn’t just a funny idea. It’s a concrete way to improve quality of life for Japan’s elderly. The sensor’s flexible plastic is designed to be more comfortable for older patients than the silicone rings usually used to monitor bodily functions, and the developers believe the thin sensors could be manufactured for just a few yen each.

There are still a few bumps in the talking diaper road–Sakurai and Someya would like to decrease the amount of power the sensor uses, as well as increase the distance the data-reading device can go from the diaper.

Currently, diaper diagnostics must be taken from a few inches away at most, which although uncomfortable is still less awkward than taking all of someone’s clothes off only to find out they’re not sitting in their own waste.

Regardless of these minor adjustments that still need to be made, one thing is obvious: it’s a good time in history to be pooping in your pants.

“If sensing is done electronically, you can tell simply by coming close to the wearer—without unclothing him or her,” Someya said.
cc.As inehrently funny as the technology is, nit does seem veyr promising in increasing the comfort of elderly patients. The small, flexible piece of plastic is more comfortable than silicone devices used in Japanese hospitals to monitor patients, and could be possibly manufactured for only a few yen.The diaper device still has some bugs to work out.