Janelle Monáe & the Underlying Question: Should Celebs Speak Up About Social Justice Matters?

“There’s so much going on in the world right now, and I think what we’re feeling is a responsibility to making sure that we’re equipping people with music that changes their lives for the better, that inspires someone to want to be their highest selves, and that when it’s time to riot for their rights, we were their soundtrack,” said Janelle Monáe in the first of the five part docu-series that highlights the making of her record label, Wondaland Records’, first collective EP, “Wondaland Presents: The Eephus.”

Hearing that quote as she spoke about the ways in which Wondaland was unique sparked a flame in me. For some time now, I’ve been on the fence, trying to decipher where to align my thoughts when it comes to celebrities and their decisions to speak up about the events that lead to social justice, specifically the mistreatment of Black lives.

There’s this mist in the air about whether it’s an obligation for our heroes to speak up, and with social media, there shouldn’t be an excuse, right? On one hand, no one should do something just because the general public (aka fans/supporters) says they should. They have every right to talk (or not) about however they’re feeling towards societal issues, if and/or when they are ready to. On the other hand, at times like this, when our generation is feeling the racial tensions of America firsthand in a way that can be traumatizing, due to the consistent deaths along with the repetitive display of images/videos depicting those deaths, it is top priority to discuss, no matter who you identify as.

We live in a country where the police are the ones we call on for help, yet seeing that the people sworn to protect us are behind the unjust deaths towards Black lives, and witnessing them walk with little to no penalty, leaves us weary of seeking help from the police. It’s an epidemic, especially because the deaths keep growing (to date, there have been 787 police related deaths), which further illustrates the necessities in speaking up about it.

A majority of unjust police related deaths have happened to Black youth, from Trayvon Martin (17 years old) to Aiyana Jones (7 years old) to Tamir Rice (12 years old), while the deaths, and lack of general support, of Black women, both cis and trans, such as Mya Shawatza Hall and Sandra Bland, have Black women feeling more than hurt; there’s defeat indescribable to bear through, being that these are our brothers, our sisters, our children… the Black people we raise and love.

There’s a numbness in seeing yet another death circulating social media, along with the media victim-blaming, bringing up past records, as if to justify the death. As if to say, the police did their job. With these circumstances surrounding us, and our consistent fight to be seen as human beings, I grow disappointed when a celebrity, especially Black, doesn’t take the opportunity to discuss something so very important to their followers. An I’m overjoyed when  a celebrity DOES take their time to illustrate their concern for our lives, showing eagerness to help uplift the Black community and humanity as a whole. 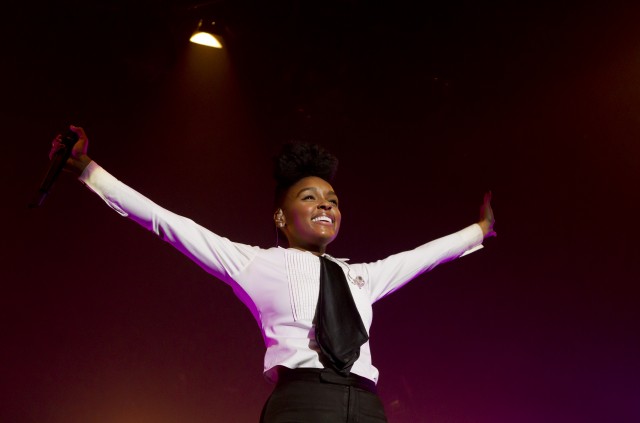 What Janelle has done, on the other hand, is a feat we haven’t seen in quite some time. To celebrate the release of “Wondaland Presents: The Eephus,” the Wondaland crew has set out on an eight city tour across America throughout the month of August, stopping in cities such as ATL, Chicago, and LA. But this isn’t just any regular tour. This tour was one set with an agenda: to represent the Other, those most discriminated against, and to rejuvenate and inspire their spirits as they fight for their right to be themselves, however they come.

The entire tour is free, allowing for fans to RSVP for a spot on the list to get in, or simply show up early for a first come, first serve attendance. This allows for anyone without the financial means of paying for concert tickets to get the full experience of seeing the Wondaland crew perform, together, for the first time as a collective, a collective that aims to bring music that generates change. There are not many artists out there, making more than Janelle & co. do, willing to provide such a service. Second, on their first stop in Philly on August 12th, a few hours before the concert started, Janelle, Deep Cotton, St. Beauty, Jidenna, and Roman GianArthur (all who make up Wondaland) led a protest march to support the life-changing #BlackLivesMatter, a hashtag created in the wake of the death of Trayvon Martin back in 2012, and brought to popularity in the aftermath of Mike Brown’s death in Ferguson, Missouri, last August.

Janelle didn’t forget to also rep Black girls/women during the march, holding up signs such as “BLACK GIRLS ROCK.” Black girls/women are prolific leaders and participants in the protests and projects geared around Black lives (it was three Black women, Alicia Garza, Patrisse Cullors, and Opal Tometi who created #BlackLivesMatter). If you’re a fan of Janelle’s, you know she prides herself on making sure that she is a role model to Black girls, illustrating that they can be whoever they dream to be, and has used her music to do so on many occasions.

The next day, before their concert in NYC, the Wondaland crew stopped in Times Square to chant in front of the police precinct, chanting the names of a few of the Black people who have died in the hands of police, followed by, “Say His/Her Name!”. Participants and onlookers didn’t know then that just an hour afterwards, Janelle would debut a song to which the chants were lyrics for. The single, “Hell You Talmbout,” which Janelle released on Wondaland Records’ SoundCloud, includes everyone on the label, with beatings of a drum as the background tune, as they pay their respects by naming those who’ve lost their lives, Black men, women, and children alike.

In a caption under the cover of the single, Janelle wrote on Instagram: “This song is a vessel. It carries the unbearable anguish of millions. We recorded it to channel the pain, fear, and trauma caused by the ongoing slaughter of our brothers and sisters. We recorded it to challenge the indifference, disregard, and negligence of all who remain quiet about this issue. Silence is our enemy. Sound is our weapon. They say a question lives forever until it gets the answer it deserves… Won’t you say their names?”

The Wondaland crew isn’t the only one to use their music to speak up about Black lives. The Internet, the band on Tyler The Creator’s “Odd Future,” record label, have a song on their album “Ego Death,” titled “Penthouse Cloud.” Syd, the lead singer of the group, gets right to the point as she chimes in the first verse, “Did you see the news last night?/They shot another one down/Does it even matter why?/Or is it all for nothing?”

Earlier this year, John Legend and Common won an Oscar in the “Best Original Song” category for  “Glory.” “Glory” was written for Ava DuVernay’s film Selma, based on the voting rights marches marches from Selma to Montgomery, Alabama. Jesse Williams, the actor who plays Dr. Jackson Avery on ABC’s Grey’s Anatomy, is consistent in using both Twitter and Tumblr as a means of speaking up and dropping facts about racism in America, while Solange Knowles does the same.

Tuning into Twitter after the song debuted and videos of the march and protests came out, and seeing the amount of people speaking praises for Janelle’s protests and “Hell You Talmbout,” I knew then more than ever that to NOT speak out about the consistent deaths of Black people in the hands of police is a problem.

When you don’t speak up, to many, it’ll show that you couldn’t care less. You miss out on the opportunity of educating and interacting with fans/supporters who aren’t aware or who don’t know the importance of the movement. When I see efforts like the ones Wondaland have made and continue to make, and how it not only inspires but comforts the people who suffer from these issues the most, it illustrates how much we need those of higher power to speak up and stand next to us as we chant, march, and protest.

It’s not so that we can rely on them, but more so that we know there are people who are in a higher place than we are to the world, but who still understand that they are human, and that we are in this together. Knowing they will further spread our word and shout along with us. Not every artist does what he or she does for the money. A lot of them, like Janelle Monáe, want to make sure that their popularity brings something more out of it than just getting photo shoots and their name in lights. They want to make sure that the people who believe in them are aware their dreams, which are consistently pushed under soil by the majority, can grow and become something beautiful and real. They want us to know that we are beautiful and talented, with the ability to create stepping-stones for the next generation.

Imagine if Jimmy Kimmel cried on stage because another Black life had fallen. Imagine if Taylor Swift spoke out about the death of Sandra Bland, being that she claims to be a feminist, and the mistreatment of a woman who fought for equality, should be reason enough to speak up about her. Imagine if Tumblr changed its title on the homepage to pay homage to #BlackLivesMatter.

Imagine if so many of us, famous or not, Black or not, banded together to fight for Black lives.

Imagine how many lives we’d save.

“Wondaland Presents: The Eephus,” is available on iTunes.

Cynthia Francillon is a writer, actress, videographer, and professional daydreamer born and raised in Brooklyn, NY. If she’s not too busy blogging about Carefree Black Girl culture, writing short stories, jamming with intensity to her favorite Spotify playlists, and/or, of course, daydreaming, you can find her on Twitter, spoonfeeding her inner thoughts to the masses.