Latina™: Where Jane the Virgin Fails in Latinx Representation 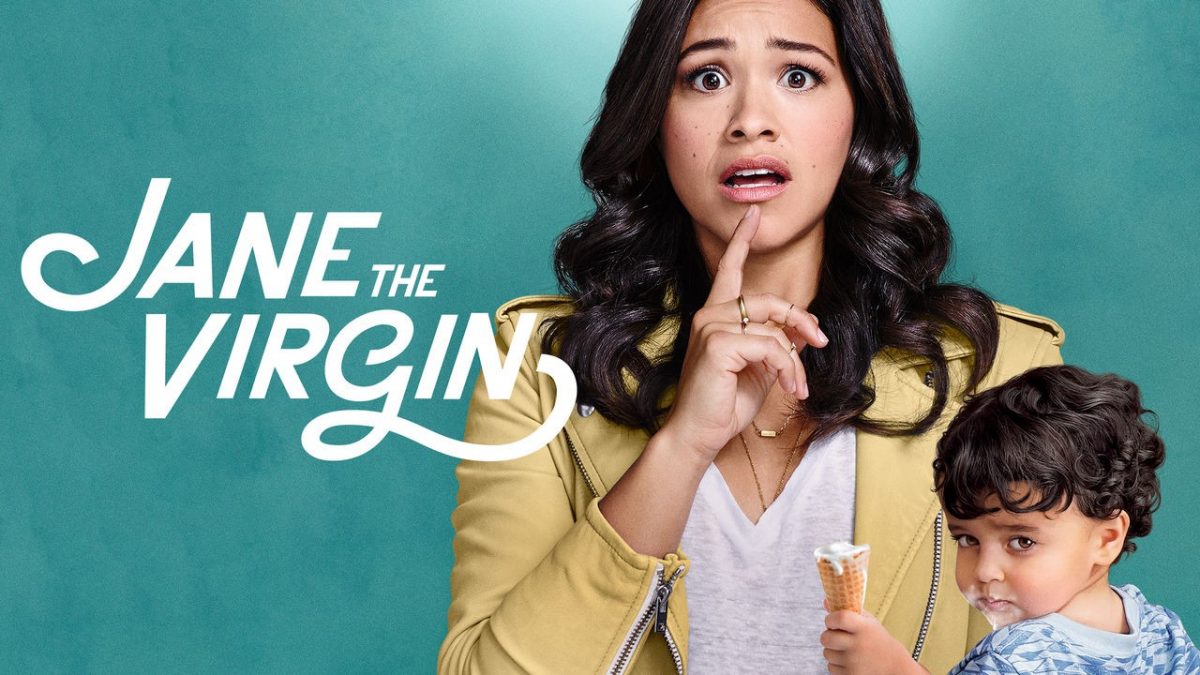 To speak Venezuelan Spanish, one must master the use of the word “chévere.” Its meanings range from “okay” to “awesome.” It’s also the foundation of every conversation a Venezuelan has.

Yet, “chévere” is notably absent from any Spanish in the television series Jane the Virgin. This wouldn’t be a problem if Jane Villanueva and her family weren’t Venezuelan. But they are. So, it’s a problem.

Jane the Virgin is an adaptation of the 2002 Venezuelan telenovela Juana la Virgen. Outside of the artificial insemination, the two shows aren’t that similar, but as a nod to the original, in Jane the Virgin, the Villanuevas are Venezuelan-American. I should be glad. A certain euphoria rises from deep within someone when they see themselves represented onscreen. I felt a sliver of that emotion during a scene in the third episode when, in an attempt to keep Jane from noticing her absent father sneaking out of her mother Xiomara’s room, Jane’s grandmother Alba forces her to take a bite out of an arepa. The scene isn’t pivotal and happens early on, but that moment has stayed with me, because it was the first time I heard the word “arepa” on primetime American television. At the time, the moment seemed like a promise—a taste of what was to come in terms of portraying Venezuelan people and culture. I was wrong.

Despite Jane the Virgin centering around a Venezuelan-American family, the show isn’t keen on exploring what it means to be one. When opportunities to do so arise, they are ignored, or worse, skimmed over.

Immigration issues, for instance, are something many Latinos face. But like all Latinx experiences, it differs depending on the person and where they are from. When Alba falls into a coma after being pushed down the stairs by the series’ villain, Magda, the show engages with the issue in the most generalized of ways. The hospital treating Alba soon learns that she doesn’t have her papers, and deportation becomes a terrifying possibility. The show successfully depicts the emotional trauma Jane and Xiomara go through as they grapple with Alba’s health and her legal situation.

However, neither of them worry about the country Alba may be deported to. The episode aired on Jan. 19, 2015. By that point, food shortages had become the new normal in Venezuela, with inflation over 60 percent and rising. Protests had been occurring all throughout the country for over a year. The show ignored such complications surrounding Alba’s potential deportation, which are distinctly Venezuelan, all together. The absence of Venezuela itself, in a situation where its inclusion would create compelling drama, suggests an unwillingness to engage with the realities that actual Venezuelan-American families can’t escape.

Then there’s the whole rejection of our culture. In the eighth episode of the second season, Jane attempts to write historical fiction for a short story competition. She decides to use Alba’s early life in America as a Venezuelan immigrant as a source of inspiration. We are thrown into Jane’s imagination, a sepia-like tint setting the scene of her young grandparents resting on a sofa. Alba’s stress levels quickly rise as she recounts her trying day, but her husband Mateo intervenes, hoping to calm her down. “Think of something you love,” he says. “Something that starts with ‘C.’ Like … Cabimas?”

But Mateo breaks character to voice Jane’s concerns as she struggles with the unfamiliar genre. “No, not just because it’s from Venezuela,” he says, shooting down the coastal city, “Something with meaning.” Instead of using the situation to reconnect with her Venezuelan roots, Jane reminds all Latino viewers how disassociated she is from her culture. When does anything from your family’s native country lack meaning? Please Jane, enlighten me! Instead of taking a moment to confront Jane’s disconnect with her culture, or struggle with the cultural identity many second or third generation immigrants face, the show decides to not. It simply leaves audiences wondering if Alba is even from Cabimas at all. You know, because it has no meaning.

I will give Jane the Virgin some credit. It does try—key word: try. One storyline in season three focuses on Alba’s relationship with her estranged family back in Venezuela. When Jane reaches out to a cousin on Facebook, Alba is furious. But Jane finally expresses some desire for that connection and is thrilled when her cousin, Catalina, shows up at her doorstep. Sadly, Catalina quickly turns into a suspicious figure who alienates Jane from Alba, her other remaining connection to Venezuela.

Catalina also continues the show’s tradition of using arepas as the sole indicator of Venezuelan culture and cuisine. Although she appears in a total of five episodes, Catalina only speaks of Venezuela’s economic crisis once. “Our family is desperately poor, along with the rest of the country,” she says, #Venezuela #helpneeded superimposed on the screen. The moment lasts a minute of screen time. That in itself is insulting, given how the show has dedicated entire storylines to the women’s march, abortion, and immigration. Worse still, never again does the show speak on the issue, nor do the characters discuss why the country is in such a state to begin with. Instead of taking a stance, the show refuses to say anything at all. I guess unlike American politics, Venezuelan politics is not worth the show’s time.

It wasn’t until I juxtaposed Jane the Virgin with One Day at a Time, another American comedy centered around a Latinx family, the Alvarez family, that I could understand my discomfort with the series. One Day at a Time is unabashedly Cuban. From its cafecitos to its takedowns of people wearing Che Guevara t-shirts, the show embraces the culture and history it’s trying to represent and captures the nuances that separate what is Cuban from the broader Latinx umbrella. One Day at a Time does not alienate non-Cuban Latino viewers by doing so. Instead, it connects with all Latinos by finally showing a family that is proud of their roots. The audience never questions the Alvarez’s American, status either. For the first time, both American and Cuban identities are respected equally.

The problem with Jane the Virgin is that you can make the Villanuevas Colombian, Argentinian, Mexican, insert-Latin-American-country-here, and the show wouldn’t change at all, but the same cannot be said for One Day at a Time. Jane and her family lack the sincerity that makes the Alvarez family who they are.

On June 22, 2017, exactly one month after the season three finale of Jane the Virgin aired, 22-year-old David José Vallenilla died in Caracas after a soldier shot him for demanding democracy. Three days before that, another soldier fired at Fabian Urbina and silenced him forever. He was seventeen. Within five months, 163 people died. The Venezuelan diaspora carry those images of the political unrest heavily. We feel helpless watching from the outside. We feel anger toward a government, a man, willing to let a beautiful country burn before admitting fault. Thoughts of what has happened, of what can be done are always on our minds. And yet, when the fourth season of Jane the Virgin, which was written while all of this went down, premiered, the Villanuevas didn’t mention Venezuela at all. For Venezuelan viewers, like myself, it was backhanded slap to the face.

Since season four premiered, a lot of things have happened. Jane and Rafael have reunited, Petra may not be as straight as she thinks—and so many people are fleeing Venezuela that neighboring countries are now facing a refugee crisis. Once again, the only show that represents the Venezuelan-American experience has remained silent. However, I have also shared one of my concerns with the star of Jane the Virgin, Gina Rodriguez. Granted, it was on Twitter. Apologies for the grammar.

“Wish Jane and her Abuela actually used Venezuelan Spanish tho. That authenticity would be nice. Latinas are not interchangeable #MakeJaneSayChevere,” I tweeted.

“I don’t really speak Spanish on the show. But I will be more aware of this when doing so. I got you boo,” she replied.

After freaking out over Gina calling me “boo”—because, believe it or not, I actually love the show and am a huge fan of hers—a dangerous thing happened. I began to hope. If one person from the show, arguably the one with the most influence, becomes aware of the dilution of the culture the show has used for its own benefit, perhaps things will improve on the Venezuelan representation front. Obviously, the darkness of what’s happening in Venezuela does not match the tone of Jane the Virgin, but it does impact Venezuelan-American life, and the show has a responsibility to reflect that.

Beatriz Mourad is a writer and Master’s candidate in Journalism (Cultural Reporting & Criticism) at New York University. She is also one of the hosts of the animation podcast, Overly Animated. You can find her caring too much about movies on her YouTube channel, or on Twitter @BeatrizMourad.