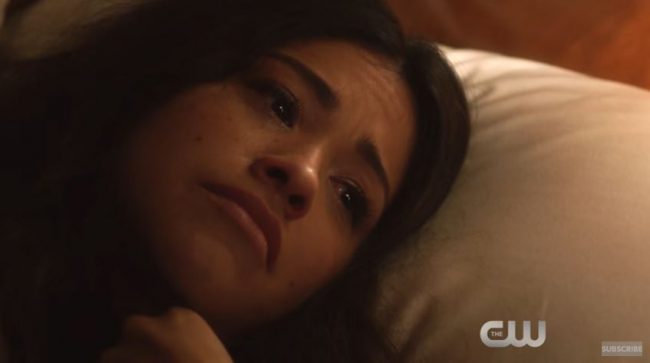 If you aren’t caught up on Jane the Virgin, now would be a good time to exit this post because SPOILERS.

Are you sure you wanna continue?

Okay. let’s get to it then.

Michael is dead and I’m not okay with this. He and Jane were finally in a good place, that love triangle of doom had been put to rest, and Rogelio got his BFF back. But this is a telenovela, which means there’s no such thing as a happy ending.

With that said, Michael’s death doesn’t come as surprise. It was teased as a cliffhanger at the end of last season and was seemingly resolved in this season’s premiere. But even as he appeared to be getting better, that whole “Michael would love Jane until his last breath” thing was still looming over his head. Even so, I can’t help but feel a little cheated. Why let him live in the beginning of the season only to have him die now?

According to showrunner Jennie Urman, Michael was supposed to be killed off even sooner. “It was also a decision made very early on, when I thought about our story as a whole. And even in season one, I knew it would be a hard thing to actually do, which is why there was a line (which many of you noticed) about how Michael would never stop loving Jane… Honestly, I put that line into the script at the last minute to hold our feet to the fire, to make sure we went through with it,” she wrote on Tumblr.

She continued: “Originally, I thought Michael would die earlier. But Brett is such an incredible actor–he gave us such great comedy and drama and first-rate exposition delivery (!), often all in one scene. And he and Gina… well, there’s that word again–magic. So, we changed some things in the writers’ room. Jane and Michael got married. They had sex. They moved into their first home. And I’m so glad we did that and I’m so glad all those firsts for Jane were with Michael.”

Urman admitted the timing was pretty bad considering the current political climate, but assured everyone that the show will still maintain its optimism. That explains the three-year time jump at the end of the most recent episode. “We’ll be flashing back to those three years and filling in gaps, but mining emotions realistically is something we work hard on and we knew the immediate pain of that loss would overwhelm our storytelling,” she added.

“After talking to grief counselors, this felt like the right time to reenter Jane’s journey. She’ll always feel Michael’s absence (and trust me, we will too), but it opens up our storytelling in new and exciting ways, while allowing for the light and bright Jane world that we love to write.”

I’m skeptical, but also curious as to what they have planned for Jane. How do you feel about this?

(via Tumblr, image via screencap)