The Mary Sue Interview: Jane Espenson Talks Being An Inspiration, What Inspires Her, and Future Plans | The Mary Sue

The Mary Sue Interview: Jane Espenson Talks Being An Inspiration, What Inspires Her, and Future Plans

Well, sort of. She can't really talk about it. 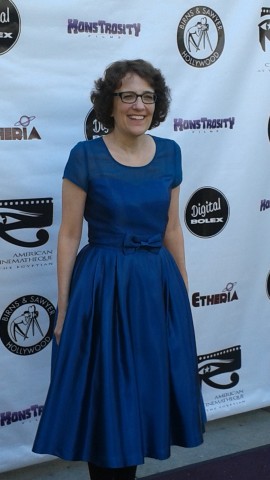 Jane Espenson is one of the biggest names in genre television, which means that chances are – pick a favorite show, any favorite show – she’s probably written for something you love. This year, she was honored with the 2015 Etheria Inspiration Award at Etheria Film Night in Los Angeles for her body of work, and for the way she’s inspired so many women who aspire to what she’s achieved in genre. The Mary Sue had a chance to have a quick chat with Espenson about what it means to win an award like this, what inspires her, and yes, some Once Upon a Time tidbits.

Teresa Jusino (TMS): What does it mean to you – being specifically recognized and honored for sci-fi?

Jane Espeson: It means the world to me – this and several other worlds, I guess. Sci-fi has always been a love of mine, growing up watching Star Trek. Sci-fi is what I wanted to write. I sort of took a detour into comedy, which I also love….you know what? It was kind of a toss-up growing up whether it would be sci-fi or comedy. But sci-fi has been very, very good to me. There’s something so powerful that you can do in sci-fi, which is creating new worlds with new d expectations, and I think that’s what gives us the courage to change this world.

TMS: It’s funny you mention sci-fi and comedy, because I don’t think there’s been enough sci-fi comedy. Like, I think of stuff like Red Dwarf…

Espenson: …and 3rd Rock From the Sun! Yeah, I love sci-fi comedy. Absolutely there should be more. You know, when we started making Husbands, we set it in a world of national marriage equality, which was maybe about to become reality, but was definitely speculative fiction at the time.

TMS: We wanted to ask you about Husbands! What’s going on with the series now? Are there any upcoming plans for it?

Espenson: We hope to keep moving forward, but we don’t have any concrete plans right now. But it’s still watchable, you can Google Husbands and find it. The great Brad Bell and I co-created that, and we’re very proud of it.

TMS: And the second season was even better than the first!

Espenson: Yeah, we’re very proud of the second. There are actually four complete stories online, and I actually love the second and the third one the most, but I love them all.

TMS: A lot of our readers love Once Upon a Time, and we wanted to know – are there any storylines that you personally wish you could explore more?

Espenson: Oh, I loved Cruella! I didn’t get to write the Cruella episode, but it’s one of my favorites of last season, and I wish that we could spend a whole season in fictional 1920s Cruella-world. I’d love that very much.

TMS: Is there anything you can say about next season’s plans?

Espenson: Nope. [laughs] There’s nothing I can say about next season’s plans, except that we’ve just finished the [fourth] week of work on next season, and we’re already really excited about the direction that is evolving.

TMS: Any upcoming projects in the works?

Espenson: None that I can talk about. [laughs again] But the fact that I answered it that way means there’s something! So there you go!

TMS: Can you at least confirm a medium? Don’t leave us hanging, Lady!

Espenson: There is a TV project that I can’t talk about yet.

You heard it here, TMS readers! A new Jane Espenson TV thing is in the works. All’s well with the world.