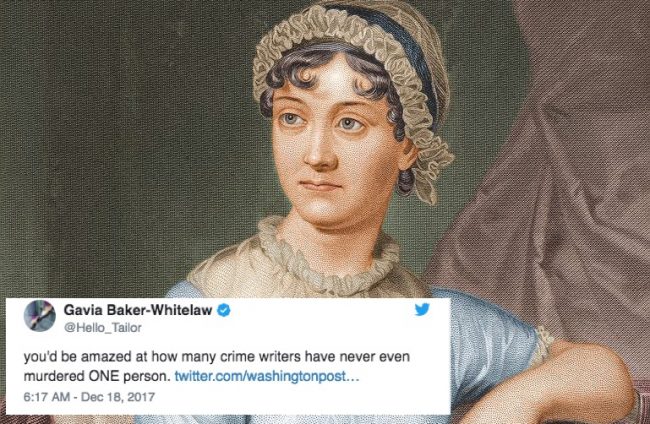 It is a truth universally acknowledged that a writer in possession of a Bad Take must be in want of some relentless Twitter mockery.

The Washington Post recently used a combination of Jane Austen’s birthday (December 16th) and deathday (200 years ago, but in July) to publish an odd essay about her life. Specifically, about the fact that she “was the master of the marriage plot. But she never married.” The writer described a crush Austen had, and the one marriage proposal she received, ultimately referring to Austen’s “spinsterhood” as a “bitter irony.” And Jane Austen Twitter is having none of it.

Where to even start? Maybe with the headline’s implied incredulity at Austen writing so profoundly on a subject she didn’t have firsthand experience with. It’s almost like she’s really skilled at being a fiction writer.

you'd be amazed at how many crime writers have never even murdered ONE person. https://t.co/pYwW3f6qZg

Last August George RR Martin confessed to me that he has never seen a dragon or an ice zombie.

I wrote a novel partly set in a women’s prison and was amazed by how many people asked me if I had been to prison.

In fact, Austen’s status as a single person isn’t exactly a liability for the specific way in which she writes about married life, which is largely about the less romantic, convoluted economic and custom-oriented side of the business that is marriage.

If anything, Jane Austen could probably see the trees a bit better for not being in the forest.
Really, @washingtonpost – as clickbait goes, this is poorly done. #JaneAusten https://t.co/foTth5Bmi3

The driving “always a bridesmaid, never a bride” message of the article is weirdly perplexing since Austen’s version of “bridesmaid” is winding up one of the most brilliant and prolific writers of all time. But sure, let’s mourn what could have been with that dude who wanted to marry her that one time.