Beam Me Up, Scotty! Star Trek’s James Doohan Is Finally Having His Ashes Sent To Space 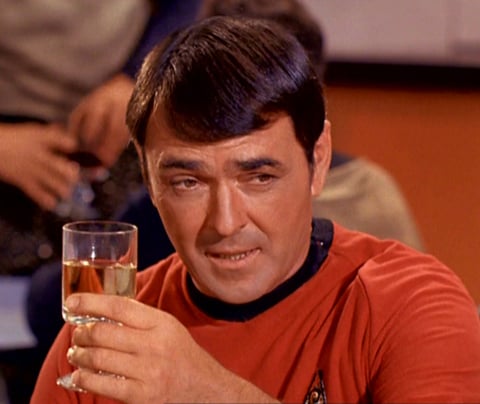 A new generation of space travel is happening as we speak. You could, perhaps, call it the next generation of space travel. Private space flights are going to start happening more and more often and we’ll get closer to the future science fiction stories have told us to much about. But before all that, one Star Trek alum will experience space a very different way. Actor James Doohan’s ashes will make their way into outer space when a privately owned rocket is sent up this week.

We recently shared a story with you about action figures of Captains Kirk and Picard being launched into the atmosphere but this is so much cooler.

Doohan, Montgomery “Scotty” Scott, from the original Star Trek series, passed away in 2005. If this particular story sounds familiar, it’s because some of the actor’s ashes were already sent to space in 2008, as per his will. The problem was, they never made it. “When SpaceX launched the remains on its Falcon1 rocket, the rocket never made it to space. When the rocket failed to get to orbit, neither did the cremated remains, or, for that matter, some small satellites sent by NASA and the Department of Defense,” writes ABC News.

Celestis Inc. will give it another shot as they launch a private rocket on a trial run to the International Space Station tomorrow. The company made their first private launch back in 1982 and specializes in memorial space flights.

“The rocket’s prime cargo is a 14.5-foot-tall (4.4-meter-tall) capsule called Dragon that is filled with food, clothes and supplies for the six astronauts and cosmonauts living aboard the space station, a $100 billion project of 15 countries that flies about 240 miles above Earth,” writes Reuters. “Falcon 9 carries a secondary payload as well — a container holding lipstick-tube-sized canisters filled with cremated remains. The deceased include Mercury astronaut Gordon Cooper, who died in 2004, and actor James Doohan, who portrayed chief engineer Montgomery “Scotty” Scott on the original Star Trek television series. Doohan died in 2005.”

They continue, “If all goes as planned, nine minutes and 49 seconds after liftoff, Dragon’s second stage will separate. It should spend the next year or so circling Earth as an orbital space memorial before it is pulled back into the atmosphere and incinerated.”

The rest of Doohan’s ashes were scattered over Puget Sound in Washington but Celestis has a guarantee that they’ll get you to space, so they held onto their portion after the first flight. And for $3,000, I would hope so. Ashes from 308 individuals will be on board this trip and most, like Doohan’s, are from the failed 2008 launch.