Whose Idea Was It For Star Trek To Be More Racially Diverse, Gene Roddenberry Or NBC? 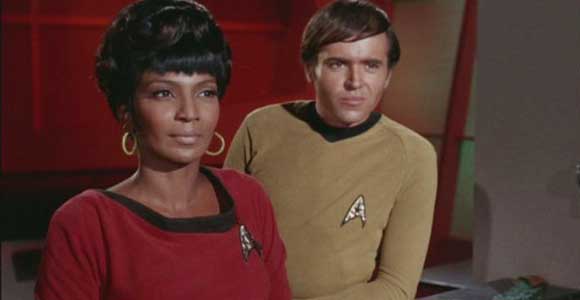 Author and film historian Mark Clark was promoting his new book, Star Trek FAQ: Everything Left to Know About the First Voyages of the Starship Enterprise, on Alpha Waves Radio. The book runs the gamut of information about Gene Roddenberry’s classic sci-fi series and is aimed at both casual and die-hard fans. But one particular bit of information that came out of Clark’s research is an alternate theory on who really pushed for the cast of the show to be racially diverse. Read on to find out what Clark believes really happened.

Roddenberry intended on Star Trek to be a highly progressive show that would allow him to make statements about the current political and cultural environment of the world. And sure enough he did in many ways, most obviously his racially diverse cast in a 1966 television world. But the original pilot wasn’t so diverse and there’s been a lot of discussion through the years about how and why that changed.

Airlock Alpha writes, “One of those myths is what motivated Star Trek to become ethnically diverse with talent like Nichelle Nichols and George Takei helping to dump the racial typecasting evident in 1960s television and movies. If you ask fans, many will tell you that it was Roddenberry himself who championed the Infinite Diversity in Infinite Combinations mentality that so defines the generation now.”

But according to Clark, that’s not exactly what happened.

“The idea that Gene Roddenberry faced massive resistance from NBC into putting an African-American woman on the bridge of the Enterprise, or an Asian-Ameican man, when in fact, NBC was encouraging Roddenberry to hire minorities,” Clark told Alpha Waves Radio. “Especially at that time, NBC was the first network to become all-color. And in tandem to that, it was presenting itself as the ‘Network of Color,’ so to speak.”

We know there was a lot of playing around with different ideas in the early days. For one, Nichols read for the role of Spock when she auditioned, a role that was originally meant for a women. Roddenberry’s future wife, Majel Barrett, was meant to play “Number One,” second in command to the captain but that was changed after the pilot. And that’s something else Clark pointed to for his theory.

“Look at ‘The Cage,’ the original pilot for the series,” he said. “If you look at the crew on the bridge of that starship, it’s Majel Barrett and a bunch of white guys.”

Whether it was Roddenberry’s idea, NBC’s or a combination of them both, the diversity happened, and that’s what’s important in my mind. Does this idea change how you see Roddenberry or Star Trek at all?