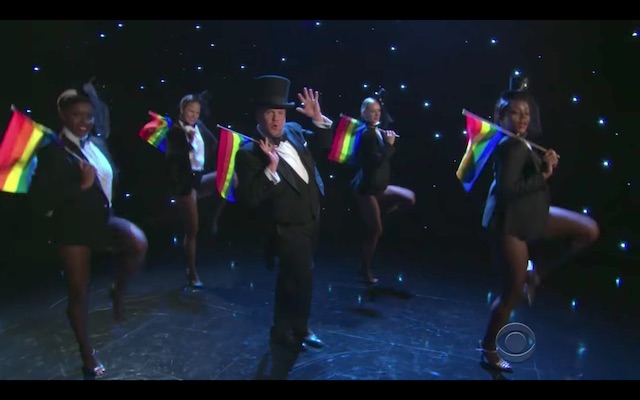 After Donald “Soggy Bottom” Trump tweeted about how transgender people will be barred from serving in the military in any capacity, outpourings of love and support from various celebrities and prominent figures came from just about every conceivable angle. Last night, many late night show hosts found their own ways of showing their support for trans people, and James Corden, ever the lovely cinnamon roll, made a beautiful tribute on The Late Late Show riffing on Nat King Cole’s “L.O.V.E.”, changing the lyrics to suit a new acronym: “L.G.B.T.”

It’s lovely, to say the least. It strikes me what a USO show might be like in our day and age. What’s more, it looks like it was pre-recorded, as there wasn’t any audience response to a few of the jokes laid within. That’s not a knock against it—it’s a pretty nice bit all the same.

The song covered many of the talking points that have come up since yesterday: that covering medical costs for trans service members would constitute a drop in the budgetary bucket; that Trump himself has never shown the bravery displayed by trans service members (or service members in general, period); and that trans vets have existed and served in the military for forever now with little to no ill effect on morale.

It was kind of a wonderful thing to see, and if I could take a tangent for a moment, I wish we’d get to see this kind of outpouring of support when trans women of color are murdered in and around our own neighborhoods. If you want to talk about bravery and shows of courage and strength, look no further than the trans women of color who disproportionately face threats of violence and murder nearly any time they step out of their front doors.