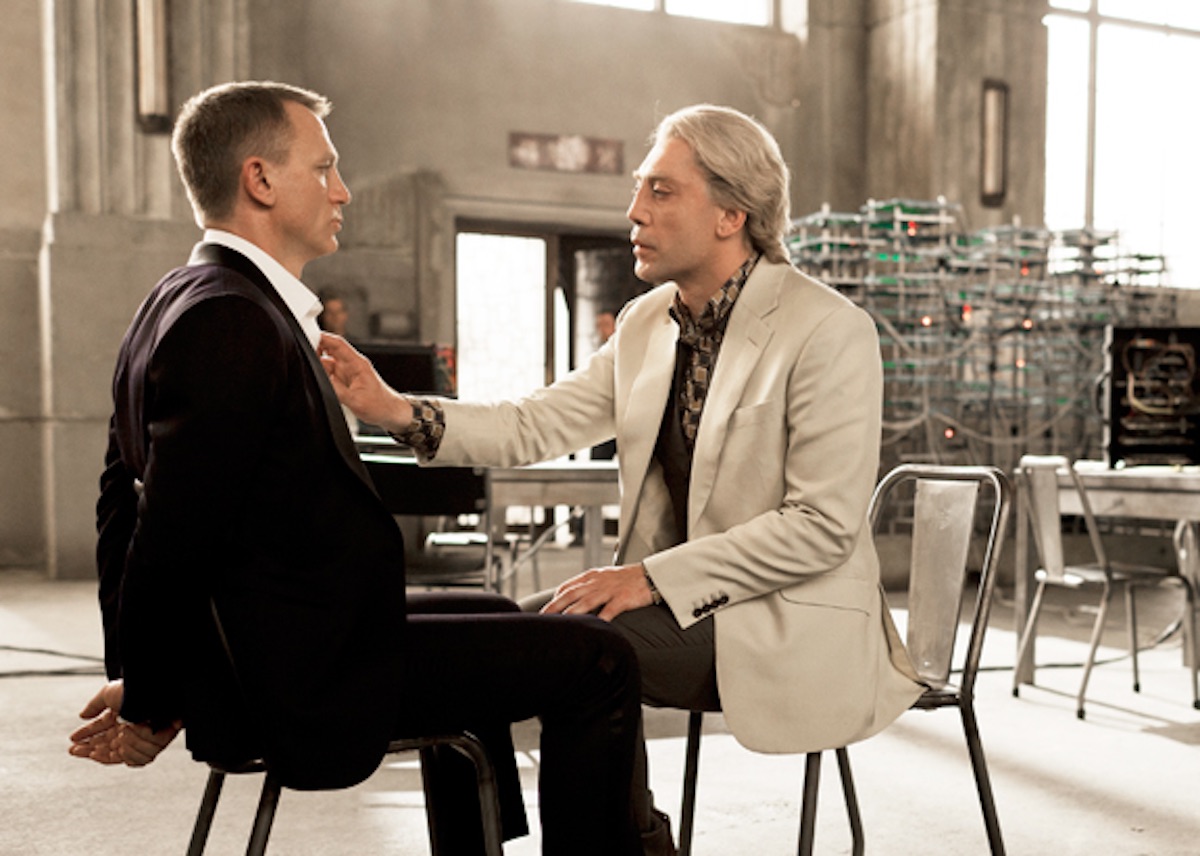 I am dedicated to spreading the good word that 2012’s Skyfall, directed by Sam Mendes, isn’t just the best new James Bond movie, it’s the best James Bond movie ever. Skyfall is unique—equal parts action and tragedy—with a truly compelling villain and real, lasting ramifications for Bond and his team. Even Adele’s Bond song, “Skyfall,” is superior to many other Bond songs and I am, in fact, playing it at this very moment.

So when there’s new news about Skyfall, I click fast, because as we’ve established, I love James Bond and Skyfall is one of my favorite films. And this news felt big: Bond uber-producer Barbara Broccoli revealed that one of the best scenes in Skyfall almost had its dialogue cut by the studio.

In Being James Bond, a new Apple TV special celebrating Daniel Craig’s Bond as we approach the release of No Time To Die, Broccoli discussed the “homoerotic” scene that occurs between James Bond and bad guy Raoul Silva, who is played with arch, exquisite menace by Javier Bardem.

Silva, a former protege of M’s, is in some ways a dark mirror of Bond, a mirror shattered by past events. Silva enjoys toying with people, and he tries to get under Bond’s skin at one point when he has captured 007. Here’s the scene excerpted, from a video titled “Skyfall – Gay Scene,” which has many hundreds of thousands of views.

Yahoo News provides an excellent summation of how the scene plays out:

In the controversial scene, Bond is tied up to a chair in front of Silva. While tied up, the movie’s villain caressed the MI6 agent from his chest to his thighs as he said, “We are the last two rats. We can either eat each other or everyone else.”

“You’re trying to remember your training now. What’s the regulation to cover this? Well, first time for everything I guess,” Bardem’s character continued as his hands found their way to Bond’s thighs.

“What makes you think this is my first time?” the British spy calmly asked.

Everything about how Daniel Craig and Javier Bardem play this scene is a masterclass, but it is Craig’s unflappable Bond that makes it work so well. Rather than recoil or be intimidated as Silva seemingly expects him to, Bond is unbothered and appears to suggest that he’s had a wide variety of dalliances in his time.

For a character who is as renowned for his lovemaking as his spycraft, this shouldn’t be a surprising concept about James Bond. It’s more surprising to imagine that Craig’s modern Bond would be limited in his pursuits. This is a man who can do everything. And even if we’re not intended to divine anything concrete about Bond’s proclivities, it’s a refreshing rejection of the “no homo” vibes we see all too often, especially in big-budget movies based on longstanding intellectual properties.

As it turns out, however, the studio making Skyfall—that would be MGM—had their doubts about Craig’s cool-as-a-cucumber “What makes you think this is my first time?” response to Silva’s overture. During the James Bond special, Barbara Broccoli, of the Broccoli James Bond-producing family, recounted, “I remember we were told to cut that line by the studio and we said no, no, no. We resisted.”

Resistance was the right call, as the movie’s reception would prove. She added, “I remember we were the night of the premiere, that line, just the whole place rocked it then with that line. I remember looking at the studio executive [and] going, ‘See, told you.'”

The Independent, which terms the line a “gay hint,” notes that after Broccoli’s comments, director Sam Mendes added, “I think there’s a huge homoerotic undertow in a lot of Bond movies.”

Ultimately, the scene is about Silva trying to use sexual intimidation to make Bond feel uncomfortable, while Bond reacts by having none of it. The way it was played felt groundbreaking for a James Bond movie and a giant action film in 2012. Not only do we receive a rejection of gay panic from Bond, the action hero, but the scene is a knowing spin on the queer-coded villain by making subtext actually textual. This interaction is an iconic part of Skyfall and now the James Bond mythos, and it’s difficult to imagine the movie without it.