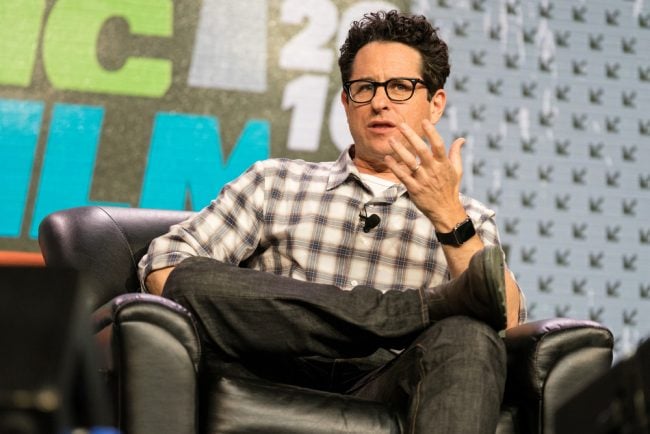 Ever since Colin Trevorrow was fired from directing Star Wars: Episode IX for being a douche (basically), fans have been waiting for word on which director will close out this third trilogy of the Skywalker saga. Some thought Rian Johnson would continue with the franchise, but that doesn’t seem to be the case anymore. Turns out, J.J. Abrams will be bookending this Star Wars trilogy after successfully kicking things off with The Force Awakens.

Deadline Hollywood revealed in an exclusive that Rian Johnson declined returning for another Star Wars installment, and that J.J. Abrams will be returning to the franchise to both write and direct Star Wars: Episode IX. He’ll be co-writing the script with Chris Terrio. Disney has confirmed that the deal has been struck in an official statement via StarWars.com:

“With The Force Awakens, J.J. delivered everything we could have possibly hoped for, and I am so excited that he is coming back to close out this trilogy,” said Lucasfilm President Kathleen Kennedy.

I know there are mixed feelings about this in fandom, as a lot of people were hoping for someone new to take the reins. Personally, I would’ve loved to see a female director get the gig.

Also, when I heard that Abrams was even under consideration again, I had pause, because I was really looking forward to seeing what he might do as a director on something of his own. I loved Super8, but it very definitely felt like a first original film. When he recently said that he was going to lay off franchises for a while, I was glad about that, because I think he needs to stretch his legs on his own stuff for a little while.

That said, I adored The Force Awakens, as I know I’ve told you all many times. It’s the film that made me actually and truly care about Star Wars. I’d always liked it, but I didn’t love it until TFA. Abrams (along with Lawrence Kasdan, natch) gave us Rey, Finn, and Poe. He gave us a way forward. He not only gave us new characters, but made us care about them.

In the criticism I’ve heard of Abrams as a choice for this, people don’t seem to acknowledge that the reason they give a crap about these new characters being handled well at all is that Abrams’ writing and direction made us care about them in the first place. Those who dismiss The Force Awakens usually do so on the grounds that it was “formulaic,” or too much like the first Star Wars film, but it also laid the groundwork for so many things we now find ourselves caring about.

As we get ready for The Last Jedi to arrive (and to actually see what Rian Johnson brought to the table, rather than just speculating about it), I’m excited to see where Episode IX ends up, how Abrams and Terrio handle characters Abrams helped create, and how it carries us further into the Star Wars future.

OK, y’all. I know there are opinions out there. Throw them down in the comments below!