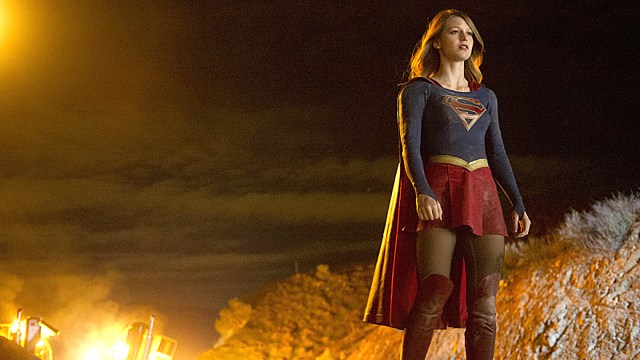 If you’re like me and the rest of The Mary Sue crew, you’re really enjoying CBS’ Supergirl. Finally, TV networks have figured out what women want, and it’s superheroes who like to hit things and save the world while also talking about the patriarchy. Who knew, right? (I’m joking; everyone knew.) But of course, no hit show is without its think pieces, and I’ve seen a lot talking about Supergirl’s costume— specifically the skirt—and of course, we can’t talk about women and skirts without bringing up the dreaded “you can’t fight in a skirt” argument. It’s an argument I hate for several reasons, but mainly because I find it to be very femme-phobic. I personally love that Supergirl is wearing a skirt. I love that she’s wearing an outfit that’s both feminine and powerful, while at the same time not overtly sexualizing her like the costumes of many other female superheroes. Why can’t we have a superhero who wears a skirt, just like so many other women do?

Supergirl first debuted in 1959 in Action Comics #252, and she was a backup feature until the end of Action Comics’ run in 1969; it wasn’t until 1972 that she finally got her own series. She’s had several costume changes over the years, particularly in the last couple of years of Action Comics. She’s worn everything from tight jumpsuits to long gowns, all in the signature Superman red and blue, but her iconic minidress, the one she debuted in 1959, endures even today, in part because that was the one used in the 1980s Superman films. 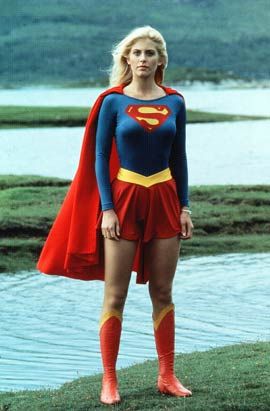 2015 Supergirl’s look was designed by Oscar-winning costume designer Colleen Atwood, who’s known for films like Sleepy Hollow and Snow White and the Huntsman. The shape is very similar to the 1959 design, though with the red skirt that was introduced later, and in the slightly darker red and blue shades that mark the newer Superman films’ costuming. The tights were added because Atwood didn’t like the look of a nude leg, and the cape is actually an under suit that zips up under the rest of her costume. 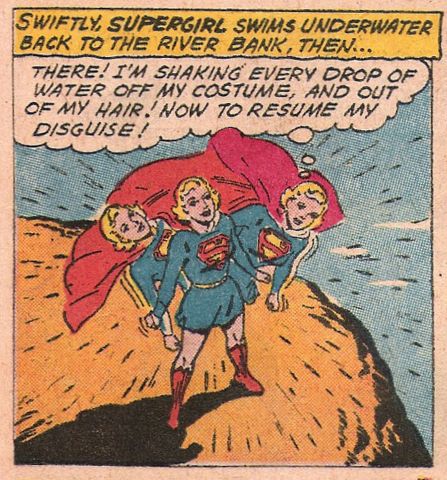 But let’s go back for a second to the argument that you “can’t fight in a skirt.” Anyone who’s ever watched a gladiator movie knows that’s not true. The Roman Empire took over the world with an army essentially wearing the modern equivalent of a dress. Scottish clansmen also fought in kilts. Many other cultures fought completely naked. Not being able to fight in a skirt may have been true at one time, when heavy fabrics and corsetry restricted women’s movements, but that’s hardly the case today. Why is not OK for a woman to fight in a skirt but perfectly fine when it’s considered a man’s garment? If we’re going to make the argument that a garment isn’t appropriate to fight in, why aren’t we talking about how male superheroes shouldn’t be fighting in a cape, because it’s a huge liability in a fight? The reason is sexism, but it’s also an(other) unfortunate consequence of second-wave feminism, this devaluing of femininity in favour of an “equality” that overvalues more stereotypically masculine clothing. The great irony is that feminists actually fought to be able to wear the miniskirt in the 1960s.

The miniskirt is a garment with a surprisingly subversive history, one that I think makes it perfectly appropriate for a character like Supergirl. It’s interesting that Supergirl is wearing a minidress as far back as in 1959, when the heyday of the miniskirt was a few years later, but miniskirts were often seen in the 1950s in sci-fi films, so the influence makes sense given who was drawing comics at the time. But 1964/5 was when the trend really started to pick up steam. Trendy London designer Mary Quant is often charged with the creation of the miniskirt, which she actually saw fashionable women wearing out on the streets. Andre Courreges actually experimented with higher hemlines in the early 1960s, but both heavily featured the look in their 1964 collections. From there, the mod look took off, and the miniskirt is typically the one that we associate with the decade.

Even Supergirl herself wasn’t immune to the trend. Feminism, the rise of the boomer generation, and teenagers all contributed to the flourishing of the miniskirt as a trend, since the expanding role of women as more than just housewives contributed to the shift in silhouettes and hemlines away from the fussy a-lines of the 1950s into something shorter, sleeker, and more modern. But the older generation was not so much into the miniskirt. It was banned in some countries in Europe for being too indecent, and even described as a “youthful protest to international threats of peace.” There are still some countries that are trying to ban it in the name of public decency.

So with this in mind, why wouldn’t Supergirl wear a minidress in 2015? In 2015, wearing clothing should be about wearing what makes you comfortable, whatever that is, and while Supergirl’s minidress may have been used in the past to titillate male readers, that is emphatically not the case in the new show. Let’s not forget that Kara chose this outfit for herself back in the pilot precisely because it was what she felt most comfortable in. A skirt does not make a character less feminist or less powerful or less capable. A skirt does not automatically mean that a character is sexualized, either, and given that Supergirl’s overarching message is that being a woman can be a powerful thing, it makes perfect sense that she would dress like one.

Megan Patterson is the science and tech editor at Paper Droids, and Pixelthreads columnist at The Mary Sue. She cares way too much about girl power, lipstick, and dresses. You can find her on Twitter @mk_patter.