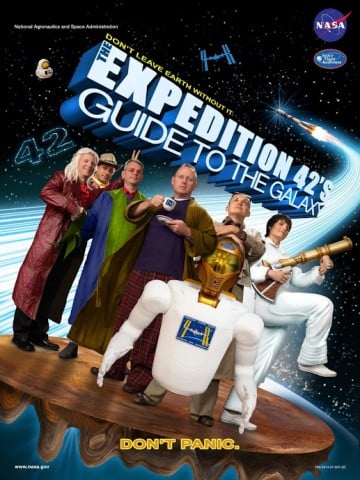 Maybe we should have paid closer attention when the most intelligent beings on the planet (astronauts) started heading off to outer space.

NASA likes to make parody posters for its International Space Station posters, but they might just want to give up trying to top this Expedition 42 Hitchhiker’s Guide to the Galaxy poster. The poster was introduced by flight Engineer Samantha Christoforetti on Google+ and depicts flight engineers Terry Virts and Anton Shkaplerov (Zaphod Beeblebrox), Alexander Samokutyaev (Humma Kavula), Elena Serova (Ford Prefect), Samantha Cristoforetti (TrillianCommander), Commander Barry Wilmore (Arthur Dent), and Robonaut as Marvin because of course.

Previously in the ISS