Hey, remember when NASA could launch humans into space all by themselves? 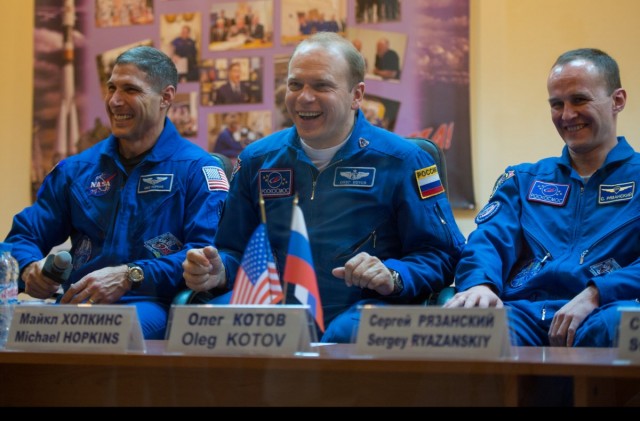 Today at 4:58PM EDT, the crew of Expeditions 37 and 38 will launch to the International Space Station on board a Soyuz TMA-10M from Baikonur, Kazakhstan, and you can watch NASA’s live stream coverage right here. Meanwhile, the Cygnus capsule that was sent to the ISS last week will have to wait to dock. Take that, Cygnus.

On the launch today will be American Flight Engineer Michael Hopkins, Ukranian-born Commander Oleg Kotov, and Russian Flight Engineer Sergey Ryazanskiy. Coverage of the launch begins at 4:10PM with B-roll of the crew doing pre-launch press and other activities. (They’re already showing some of these if you want to watch now.)

In addition to the launch, NASA will live stream the docking of the Soyuz to the ISS which is scheduled for 10:47PM with coverage beginning at 10:00PM. The hatch will be opened at 12:25AM if you want to stay up late to watch the new crew being welcomed. You can watch all those events live right here in the very same window thanks to NASA TV.

It may be a little crowded up near the ISS as the Cygnus capsule that launched to the station last week is still floating nearby waiting to dock. It was expected to dock over the weekend, but a communications error between the Cygnus and the ISS prevented that from happening.

Orbital Sciences, who built the Cygnus as part of a NASA contract to help supply the ISS, quickly took to fixing the issue, but the Soyuz launch will delay any further attempts to dock the Cygnus since it has humans on board, and the Cygnus is just loaded up with non-essential supplies.

The next earliest attempt to dock the Cygnus will be this Saturday, and if NASA live streams it, you can watch that right here too.

We just want NASA to live stream all the things all the time.