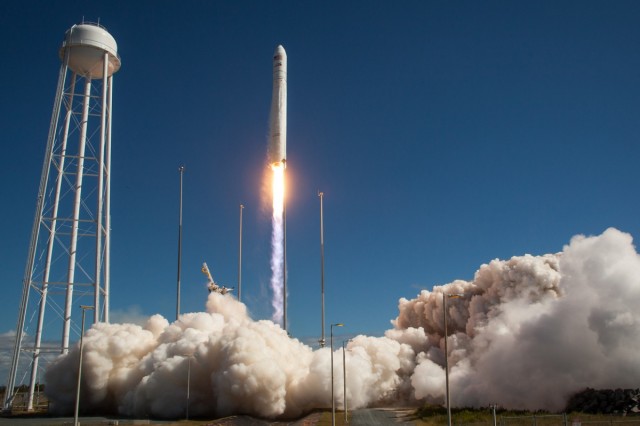 We’ve been keeping you posted on the launch of the Cygnus cargo freighter that was due to rendezvous with the International Space Station early last night. Carrying 1,300 pounds of food and clothing supplies for the ISS crew, the Orbital Sciences ship attempted to dock with the ISS at around 1:30am – but wasn’t able to complete its mission.

Despite flying just 2.5 miles away from the ISS and having established contact with the station, the Cygnus suddenly rejected a bunch of data, and their link was broken. Not to worry though; Orbital knows what’s up, and is already working on a software fix for the glitch. Cygnus is scheduled to try another dock with the ISS as early as Tuesday – which would be great, since a Soyuz spacecraft is scheduled to dock with the station on Wednesday night, carrying a NASA astronaut and two other crew members.

Virginia-based private firm Orbital has a 1.9 billion dollar contract with NASA to send eight freighters of supplies up to the ISS. Orbital is one of only two private companies (the other being SpaceX) working to fill the void left by the discontinuation of the US shuttle program.

Since the Cyngus is just a baby spaceship (this is its first flight ever), Orbital is using this expedition as a test mission, and there’s nothing of extreme importance amongst the cargo. The Cygnus could hang out in space for months, and still be cool.