Olympic WiFi Catchers Are Out to Get You | The Mary Sue

Olympic Wi-Fi Catchers Are Out to Get You 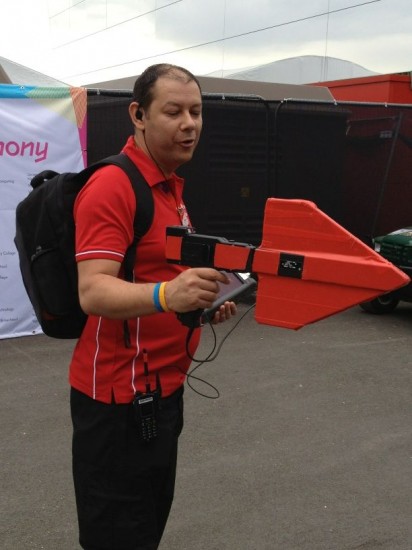 LOCOG’s ban on 3G Wi-Fi hotspots at the London Olympics may seem ridiculous to some, but the equipment used to enforce it will seem ridiculous to everyone else. Laugh as much as you want, that Wi-Fi detector will sniff out your hotspots and shut them down before you can say “United Kingdom Office of Communications.”

The London Organizing Committee of the Olympic Games has banned all unauthorized wireless frequencies at the 2012 Olympic games and have decided to enforce this ban with silly, traffic sign style frequency detectors. These gentlemen are apparently paid to walk around, menacingly wave their large orange detectors, and report unauthorized Wi-Fi signals. How dare they take away our hotspots!

LOCOG actually has a pretty good reason for using these detectors. As Redditor chortiz11 explains, there are hundreds, if not thousands, of wireless signals at an event as large as the Olympics and just keeping track of all those frequencies is a challenge in and of itself. Throw in a few dozen unauthorized wireless signals using whichever frequencies they feel like and you have a big problem. So these “Wi-Fi police” are really just hired to keep everything running smoothly with all those glorious wireless signals buzzing around overhead.

While I don’t know exactly what happens when the detector goes off, I’d imagine it sounds an alarm that screams, “Warning! Fun detected! No fun allowed!” Yeah. It’s probably something like that.