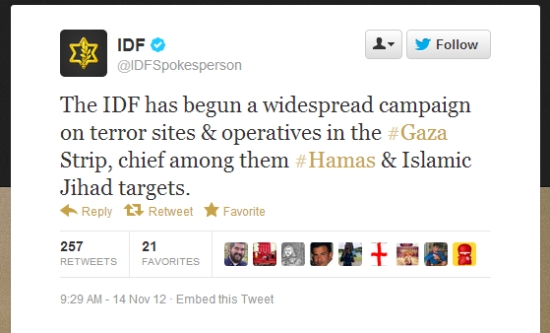 Israel is conducting what appears to be a large-scale military operation inside the Gaza Strip, but that’s nothing terribly new. Israel fighting with other folks happens fairly frequently. What is new, however, is the fact that they announced their campaign on Twitter before any kind of press conference was held. Suddenly, the traditional social media gossip seems even more irrelevant.

Fast Company explains why Israel’s up in arms this time:

The Israeli military incursion follows months of rising tension in Gaza and southern Israel. More than 100 rockets have been fired at Israeli civilian targets since the beginning of November 2012, and Israeli troops have targeted Hamas and Islamic Jihad forces inside Gaza in attacks that reportedly included civilian casualties.

Since the tweet went out before any official press conference, that makes it the first official confirmation of an ongoing military campaign made via Twitter. Here it is, in all its glory:

The IDF has begun a widespread campaign on terror sites & operatives in the #Gaza Strip, chief among them #Hamas & Islamic Jihad targets.

War. War never changes, but the way in which we announce it sometimes gets an update.