What If Rose Quartz Is Actually a Villain? Rose Quartz is one of the most beloved characters in Steven Universe, adored by the Crystal Gems and fans alike, and yet there’s still so much we don’t know about her, even five seasons into the show. Because of this, it’s difficult not to sympathize with Steven when he laments how little he knows about the woman who not only gave “birth” to him, but who lives on inside of him with her gem taking the place of his bellybutton. Rose is continually painted as a benevolent and caring force who left scores of both people who loved her and people who hated her behind.

Mostly, she’s depicted as a force for good: a martyr for the cause, a believer in humanity, and an ever-present deity-like figure in the Crystal Gems’ lives. She’s remembered fondly, but was she really as pure and innocent as the show would have us believe? And wouldn’t it be an interesting move if Steven Universe pulled a fast one on viewers and revealed Rose to be just as callous and uncaring as the gems back on Homeworld? If we go by some of the hints in the story that have been planted so far, this may not be too far out of the realm of possibility. It also makes for an interesting new lens to view the show through: Is Rose Quartz secretly a villain? 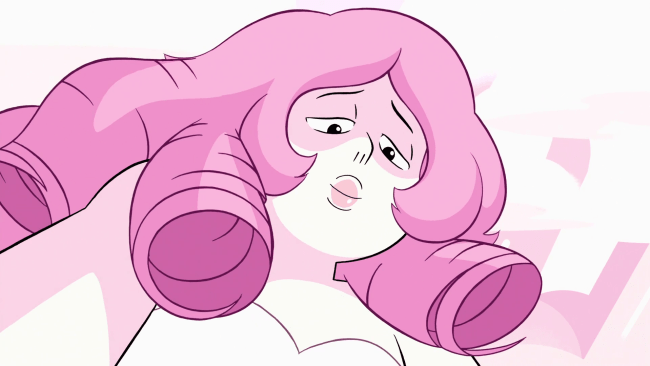 There have been a few signs meant to insinuate that Rose could be a lot different than we thought,  as if the plan was to reveal Rose’s indiscretions slowly and over a long period of time.

With the Gems we’ve met so far on Steven Universe, each of their various personalities come with flaws, so the idea of Rose being a perfect mother figure, or someone that Steven should have to live up to is a bit inconceivable. Giving up her physical form to bring Steven into the world was selfless, but leaving Steven with little or no direction as to the kind of person she was beyond a quick video also seemed hasty, as if she just wanted to hurry up and see the results of bringing a half-human, half-Gem into the world.

Previously, Rose was accused of shattering her leader and creator, Pink Diamond, early on in the series. Most recently, it appeared as though the allegations that Rose shattered Pink Diamond were challenged as of the episode “The Trial,” where Steven went before both Yellow and Blue Diamonds in an attempt to atone for the supposed crimes his mother committed against Homeworld and her Diamond. As the story goes, Rose essentially murdered Pink Diamond long ago in front of several witnesses after Pink Diamond, traveling in her palanquin, stepped out for a moment and received a harsh blow from Rose’s sword. 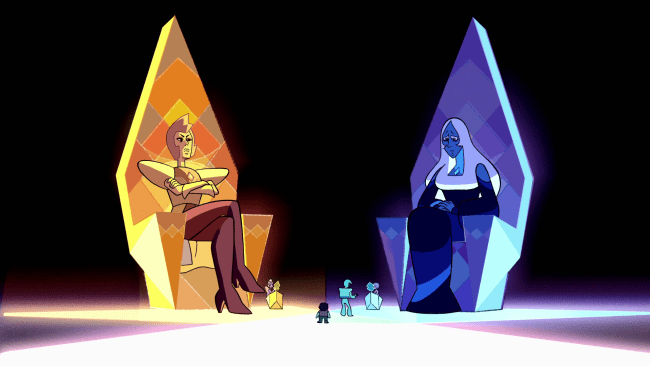 Despite the bond the two gems likely shared, with Rose’s love for humanity and Pink Diamond’s hobby of kidnapping humans and housing them in her Zoo, it makes sense that Rose would have had the motive to eliminate Pink Diamond, but differing ideologies and harm to humans wouldn’t necessitate shattering. It’s been heavily implied that Yellow Diamond could be responsible after all, but that has yet to be confirmed. It could very well still be Rose who shattered Pink Diamond, with the blame offset to Yellow Diamond to try and clear her name.

There’s also the question of Bismuth, who Steven happened upon by accident while in Lion’s mane/dimensional portal. Bismuth had been bubbled and hidden away with Rose’s things long ago, without the knowledge of the rest of the Crystal Gems. Not even Pearl, who Rose supposedly was the closest to, was aware of why Bismuth had to be put away. 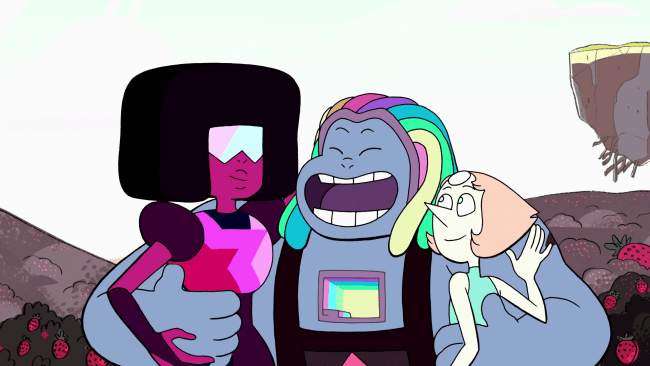 The reasoning behind her supposed bubbling was disturbing: Bismuth was looking to shatter gems, while Rose was against this course of action. It seemed her only choice to pacify Bismuth and keep her from harming gems was to hide her away and keep her from doing so, though in it seemed much more like a show of dominance and a “my way or the highway” action than one that was meant for the good of humanity and the rest of the Crystal Gems.

Beyond the actions we’ve become privy to over the course of the series, we have the quick flashbacks and episodes where Rose was still alive and interacting with others. She’s describes humans as fun, like she’s “playing” with Greg, even when it seems she’s in love with him. Obviously this love matured somewhat after Rose declared she wasn’t sure she understood human love, but the cavalier attitude she displayed here and there when Greg would question what the two had seemed uncaring and strange. She has a veneer of a warmth and a caring personality, but it doesn’t seem more than skin deep at some phases of the show. You have to wonder sometimes if maybe her fascination with humanity was a simple ruse that pushed her to fight so she could continue “playing,” after all. At some point toying with something you love is just as bad as looking to harm them.

But despite these ideas, we shouldn’t get our hopes up. Rose is likely going to remain the good and pure center of the show, because as full of twists and turns as Steven Universe has been, she’s such a central part of the narrative and everyone’s lives (especially Pearl and Greg) that a revelation like this would shatter viewers to the core—pun intended. Discounting the several concerning red flags that have appeared in the series that might have shown us otherwise. It’s still fun to think about—imagine Rebecca Sugar turning a beloved character into one that betrays us all. It’d be painful, but it would make for television gold.

Brittany Vincent has been covering video games, anime and tech for over a decade for publications like Otaku USA, G4, Maxim, Engadget, Playboy and more. Fueled by horror, rainbow-sugar-pixel-rushes, and video games, she’s a freelancer who survives on surrealism and ultraviolence. When she’s not writing, watching anime or gaming, she’s searching for the perfect successor to visual novel Saya no Uta. Follow her on Twitter at @MolotovCupcake.