Is Anonymous Really Launching An Attack on Facebook? | The Mary Sue

Is Anonymous Really Launching an Attack on Facebook on November 5? 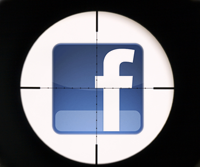 Like previous operations against PayPal and Sony, Anonymous has announced Operation Facebook, an attempt to disable Facebook on Guy Fawkes Day, of all days. Except, have they? This particular situation really lays bare the process by which a decentralized organization operates. The origin of Operation Facebook traces back to a YouTube announcement in typical Anonymous style, uploaded by the user FacebookOp on July 16th. It is his only video. The video also makes mention of a Twitter account devoted to the project.

The catch? Well, the Twitter account only has one tweet, dating back to July 16th, the day the video was uploaded. To boot, Anonymous, a notoriously talkative bunch, haven’t mentioned anything relating to that particular project despite all the things that have happened in the meantime. And the statement referenced was released on “pirate pad” instead of the iconic, and usual Pastebin. While the story is starting to be picked up by CNN, Business Insider and the Village Voice, I’m having trouble finding any references to the project before it was picked up by large media outlets. The video dates to mid-July, but nearly all coverage of the story is in August. So, is this a real threat or is the coverage of it making it real?

The problem seems to be that many of these articles are quoting Anonymous when really, they’re quoting the guy who registered the YouTube handle “FacebookOp.” That is no discredit as that is simply the way one handles Anonymous. The decentralized nature of the group means that you can only be sure “Anonymous” is doing something as opposed to “just some guy” by gauging the media attention it’s receiving. I could be very wrong, but what appears to have happened here is that a hapless reporter stumbled upon a video made by someone claiming to speak for Anonymous (of which I am sure they are many) and took it as verified truth, while the evidence — more accurately, the lack thereof — seems to suggest that if this was big deal to the majority of Anonymous, we would have heard more about it during the several hacks that have taken place in the intervening time.

That’s not to say that Anonymous hasn’t been planning an attack on Facebook, nor is it to say that they won’t start now, considering all the attention. The fact of the matter is that press could be creating retroactive continuity here. All it takes for an Anonymous operation to be real is that it be taken seriously, therefore, if you start taking it seriously, it’s going to be real.