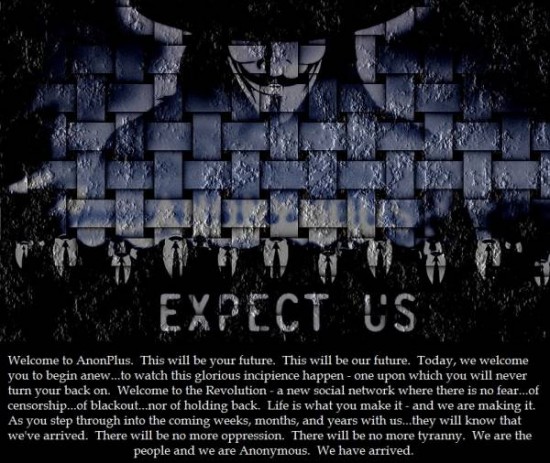 After reportedly being banned from Google+, a number of Anonymous members and affiliates have banded together to introduce Anonplus.com, a social network with a decidedly Anonymous spin. The site, inactive for the time being, consists of a splash page describing the site’s intended purpose with that famous Anonymous flavored fanfare.

It appears that the site, while presumably including more recent social networking features and technology, will also hearkenback to Anonymous’ roots in the unregulated, largely anonymous 4chan image-board /b/. The site’s tagline, “Social Networking Anonymously” certainly raises some questions we probably won’t see answered until the site’s actual launch, which is currently unscheduled. Take that as you will.

The idea of anonymous social networking seems to fly in the face of what social networking is generally accepted to be. That being the case, this project has the potential to transcend Anonymous’ hacking exploits and political aspirations to alter what we think of as social networking. Assuming the network actually does go live at some point and providing that it doesn’t wind up as a 4chan clone, Anonplus could provide an interesting study in anonymity in social networking. On the other hand, it might just feel like Myspace.

Considering that social networking can be loosely defined by the persistent links that exist between members (friendship connections, etc.) as opposed to fleeting connections (a post on a thread, etc.), in order for AnonPlus to work as I think it is intended it has the interesting task of engineering persistent anonymity that is somehow fundamentally different from simply using a social network with fake information. Facebook and its ilk revolutionized social networking by requiring evidence of identity, although those requirements eroded over time. Anonplus, it seems, would just be a jump back in time to the days where everyone used a screen name, and you could never really be sure who was who. Whether or not it brings anything new to the table, or whether it comes to the table at all remains to be seen. In the meantime, I’m sure you’ll be busy enough juggling all the social networks you’re already a part of.