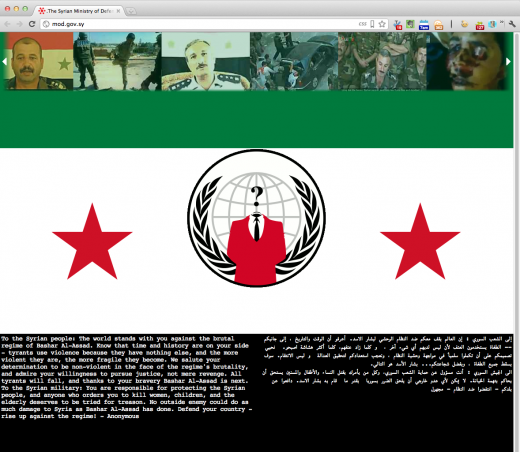 The ever-present, always busy Anonymous has been up to their hacking ways again, this time taking down the website for the Syrian Ministry of Defense. The hacked webpage included a message to the Syrian people, assuring them the world is on their side and against the regime of Bashar Al-Assad, and a message to the Syrian army, encouraging them to “defend [their] country” by rising up and unseating Al-Assad by force.

Images at the top of the hacked page linked to videos depicting ongoing violence in Syria and the bottom of the page contained links to various protest groups. Source code from the page suggests the hack was performed by someone who uses the handle Poppy. While Anonymous is no stranger to hacks motivated by global politics, this is the first time in a while that they have hacked anything unrelated to the arrest of Anonymous affiliates or the support of WikiLeaks. Only time will tell if this is a one-off attack, or the start of an entire campaign.

To the Syrian people: The world stands with you against the brutal regime of Bashar Al-Assad. Know that time and history are on your side – tyrants use violence because they have nothing else, and the more violent they are, the more fragile they become. We salute your determination to be non-violent in the face of the regime’s brutality, and admire your willingness to pursue justice, not mere revenge. All tyrants will fall, and thanks to your bravery Bashar Al-Assad is next.
To the Syrian military: You are responsible for protecting the Syrian people, and anyone who orders you to kill women, children, and the elderly deserves to be tried for treason. No outside enemy could do as much damage to Syria as Bashar Al-Assad has done. Defend your country – rise up against the regime! – Anonymous