IRS Goes Where No One Has Gone Before, Uses Tax Payer Money To Pay For Star Trek Spoof 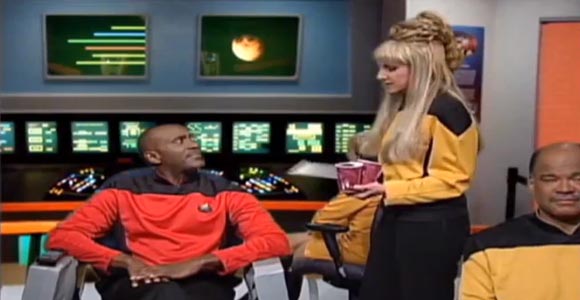 It appears there’s no sign of intelligent life at the Internal Revenue Service. They created Star Trek and Gilligan’s Island spoofs that cost tax payers $60,000.

The Star Trek spoof (watch it here) featuring a 1960s era set and Next Generation costumes, was created as a training video in 2010 at an IRS studio in Maryland. It was released to the public this week after investigators from the House Ways and Means Committee asked for it. The Associated Press reports:

The video features an elaborate set depicting the control room, or bridge, of the spaceship featured in the hit TV show. IRS workers portray the characters, including one who plays Mr. Spock, complete with fake hair and pointed ears.

The production value is high even though the acting is what one might expect from a bunch of tax collectors. In the video, the spaceship is approaching the planet “Notax,” where alien identity theft appears to be a problem.

The IRS said it “was a well-intentioned, light-hearted introduction to an important conference during a difficult period for the IRS.” Congress saw it differently.

“There is nothing more infuriating to a taxpayer than to find out the government is using their hard-earned dollars in a way that is frivolous,” said Rep. Charles Boustany, R-La., chairman of the Ways and Means oversight subcommittee. “The IRS admitted as much when it disclosed that it no longer produces such videos.” After careful consideration, Congress considered the Gilligan’s Island parody to be a legitimate training video and did not release it.

The IRS also said in their statement, “The IRS recognizes and takes seriously our obligation to be good stewards of government resources and taxpayer dollars. There is no mistaking that this video did not reflect the best stewardship of resources.”

The worst part of this whole thing is it took them $60,000 (or even $30,000 if the funds were divided evenly, though the report says ST got the bulk) to make this spoof. Fans have done better with a budget of nothing and Mountain Dew.