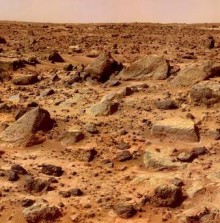 It’s hard to imagine that life exists somewhere on the barren, dry, cold reaches of some place like Mars. It’s even harder to look for any, on Mars at least. That’s why many scientists have turned to studying the extremophile microbes that live in the most inhospitable places on Earth to discover what kind of off-the-wall, unpredictable survival techniques might be used to survive out in the wastes of Mars, or anywhere else for that matter. By studying extremophiles, researchers from Portland State University have discovered a particularly gritty kind of bacteria that survives by essentially eating iron.

The bacteria were found living in an old lava tube in the Cascade Mountains, underneath a layer of ice. The cold, dry conditions of their habitat are similar to Mars, although a bit less extreme. Still, in this remarkably cold, oxygen-starved area, there isn’t much in the way of normal food sources. Whereas your average bacteria survives by breaking down sugars, these bacteria have devised a way to live off rock, specifically the iron contained within.

The mineral Olivine is their main food source. By initiating a simple chemical reaction with the iron contained in this magnesium iron silicate, these bacteria can snag enough energy to stay alive even in this seemingly inhospitable atmosphere. As you may have guessed by now, Olivine is also present in similar areas on Mars, meaning that this kind of iron-eating behavior could be a viable way of life for organisms that could stand the somewhat harsher conditions of the red planet.

Of course, discoveries like this are a far cry from finding life on Mars, but they do, however, make it harder and harder to rule out extraterrestrial life as a possibility. Granted, there may not be any out there that we can find, but discoveries like this make it easier to argue that there could be, have been, or might be. Pretty exciting stuff. Also, this bacteria eats iron. I mean, enough said.