Iris West and Bad Lessons on The Flash | The Mary Sue 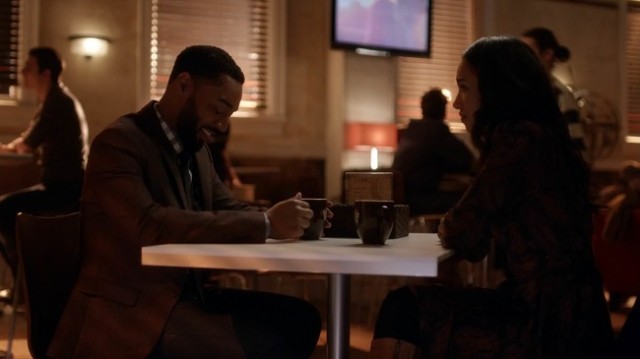 When it comes down to it, I’m a fan of The Flash. I watch it live, I enjoy how they’ve brought in some of the weirder elements of the comics (heck yeah, King Shark!), and you better believe I’m giddy about the cross-dimensional, cross-network Barry/Kara team-up on Supergirl tonight. But, sometimes The Flash messes up, and sometimes its mess is really noticeable—even when it’s for the C-plot of the week, which is where I found myself last week when I watched Iris’ storyline in “Trajectory,” episode 16 of the show’s second season. Now I need to talk about it.

In “Trajectory,” Iris’ brand new editor, Scott Evans (played by Tone Bell), is already suspicious of the Flash because no one is that noble. When an unidentified blur starts publicly stealing people’s purses and wallets, he immediately thinks it must be the Flash (which makes no sense since Central City has seen other speedsters, and even the editor brings up the many evil metahumans the city has already faced, so clearly more than one guy could have speed powers, but I digress). Evan assigns Iris the piece that would accuse the city’s Scarlet Speedster of being the thief; obviously, Iris knows the truth and doesn’t want to write her assignment. She suggests they both get coffee so she can make her case against running the article. Boss takes the coffee suggestion to mean she wants to go on a date. Boss is surprised and annoyed when she talks about the work issue. Iris finds out what he really thought it was and is instantly embarrassed. Later, she apologizes to him for not understanding him and says she’s be up for dating.

So let’s break down just why this is so, so messed up. Let’s start with the big one—he is her boss! Even if Evans misread her suggestion as flirtation, it’s totally inappropriate for him to accept a date with her. Granted, this should be a moot point anyway, since there’s no reason for him to assume she was asking him on a date. She was speaking to him about the article right before mentioning the idea of them discussing it more over coffee. It was a clearly one-on-one work meeting in a casual setting, but again, I have to stress that even if there was reasonable cause for him to think she was flirting with him, the ethical thing to do would be to not accept what he thought was a date from one of his employees.

And then there’s the actual meeting. Iris makes a case for why she thinks the Flash is innocent (and again, even without the editor knowing what Iris knows, there’s reasonable doubt for his “Flash is definitely robbing people” theory). Evans still doesn’t believe it, pointing to his own experience in his last job with a local hero who turned out to be crooked. He then casually asks if disliking the Flash is a dealbreaker for her dating someone, which confuses her since they were just talking about work. It’s at this point that Evans scoffs and bitterly says that he only now realized Iris wasn’t asking him out and just wanted to convince him to drop or change the article—because apparently that’s out of line for a reporter doing her job?

You’d think Evans would be embarrassed for jumping to that conclusion about a new employee and would apologize to her. Instead, he guilt trips her about “tricking him” into making this about work. Yes, clearly she needs to feel bad for her boss assuming his employee would want to date him. Folks, he is in a position of authority. In any other show, this would be a creepy moment and a big red flag where Iris realizes she can’t trust her boss to treat her as a reporter instead of a potential girlfriend. But in this episode we’re supposed to accept that this is normal!

I’ll note that maybe—maybe—this scene would have been more appropriate if it were a fellow reporter who was working with her on the article and thought she was asking him out. Even then, it’s a very gray area, would lean heavily into sexual harassment, and guilt tripping a coworker over thinking she wanted a date when she wanted to discuss work would still be out of line. But it is extremely out of line in this particular context because of the power dynamics between an editor and their reporter.

But let’s get to what is maybe the worst part of all of this: the third act. So it’s past the climax of the episode when Barry and the new speedster Trajectory have a big battle in public (and the female villain overdoses on Velocity 9 and dies or disappears into the Speed Force—where this lands among under-writing female characters on this show is a topic for another day). Iris writes her article about what really happened instead of what her boss had wanted her to write, and Evans even congratulates Iris on a well-written piece. Then … a blushing Iris apologizes to Evans for “misreading the situation” and lets him know that disliking the Flash is actually “not a dealbreaker” for her. Yes, she is totally up for dating him. The writers are most likely setting her boss up to be her next boyfriend. Cut to me, sitting at home, watching the show, speechless at this whole C-plot. And then having the urge to flip a table.

Up until now, The Flash has done a really good job this season not pushing a love interest on Iris after her fiancé died. Her storylines have had some bumps (like her dad keeping her mom’s life a secret until this year), but she’s still gotten to do some sleuthing, she’s established a friendship with Linda Park, she’s developed a supportive sibling relationship with Wally, and she’s been a part of Team Flash at STAR Labs. But what kind of message is this episode sending its audience, particularly the young boys and girls who watch the show, about women in the workplace?

This is what it comes down to: as a freelance critic and a full-time copywriter, watching “Trajectory” made me extremely uncomfortable. Situations like the one Iris goes through are so common for women in various professions, but especially for female writers and other creatives (considering what we know about harassment in the comics industry, this storyline is especially in bad taste). It’s downright irresponsible of the show to set this situation up so that Iris is apologizing to her boss for leading him on. And for them to now position her boss as her next love interest is baffling and frustrating. I like The Flash a lot, but it should be better that this. So be better than this, show.

Katie Schenkel (@JustPlainTweets) loves superheroes, cartoons, feminism, and any combination of the three. Besides The Mary Sue, her work can be found on Panels, Comics Alliance, Quirk Books, CliqueClack, and Playboy. Check out her website Just Plain Something, where she hosts the JPS podcast and her webseries Driving Home the Movie. She’s also currently working on a comic project with artist Chad Sell.