Baseline iPad Parts May Only Be Worth $220

According to a recent set of estimates by market intelligence firm iSuppli, the component parts for the entry level $500 iPad may only be worth $220. With a manufacturing cost of roughly $10 thrown in, that would mean that Apple makes a profit of about $270 on every 16GB iPad without 3G sold. And it’s even more drastic for some of the higher-end models:iSuppli’s full chart of unit costs for the iPad as matched up with retail prices: yes, that is a $440 profit margin on the 32GB iPad with 3G that you see. 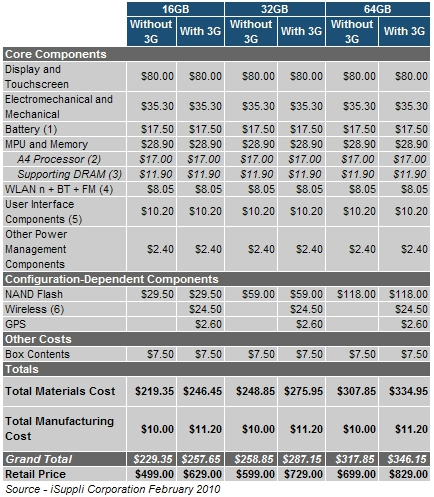 On Monday, a Credit Suisse analyst told the Wall Street Journal that Apple would slash prices if sales were slow; if these numbers are even ballpark, we know where that cushion is coming from.