No, Kids Who Use iPads Won’t Have Smaller Vocabularies

Arm your arms tired? Because this claim is pretty huge stretch. 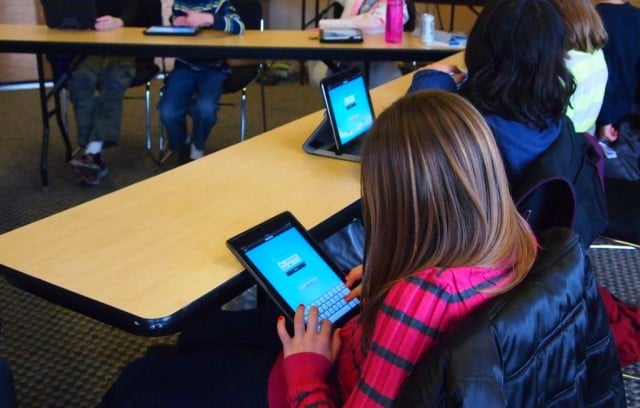 A study was done that used MRI scans of the brains of 27 adults to determine that humans learn new words better by hearing them than they do by learning them visually. One of the authors of  the study then told the Daily Mail that it means children who use iPads will learn fewer words than previous generations. Nope. It does not.

Marco Catani of the Institute of Psychiatry at King’s College in London, and co-author of the paper, “Word Learning is Mediated by the Left Arcuate Fasciculus,” said in the Daily Mail:

We have less time to talk to each other and our children are taught through devices. They have access to the internet, iPhones, mobile phones and tablet computers. These are visual rather than auditory, so it is likely that they will end up with a lower average number of words than previous generations.

Except that’s not a claim supported by anything in the paper, the stated goal of which is, “to seek direct evidence of the role of the [arcuate fasciculus] in auditory-motor integration and word learning.”

I’m now seeing the story being picked up a few other places all focusing in on the issue of tablets and smartphones limiting vocabulary, and that bothers me. Besides the obvious fact that tablets, computers, and smartphones are also audio devices, using this study to justify the claim that they should impact vocabulary at all is unfounded. It’s also incredibly old.

Socrates made a similar argument about the alphabet, claiming that using symbols to commit ideas to writing would make humans shallow thinkers and rob us of wisdom. You know how we know Socrates said that? Because Plato wrote it down. Socrates was wrong. Writing things down is awesome.

I’m not arguing against what the study actually shows — that humans learn new words better when hearing them than seeing them. I’ve only ever seen the words arcuate fasciculus on my computer screen. As I write this now, I’ve never heard them out loud. Will I remember them as well as if Marco Catani himself spoke them to me? Maybe not, but I’m sure I’d learn them just as well if he told them to me over Skype on my laptop than if he told them to me in person.

As far as Catani’s claim goes, people not having enough time to talk to their kids sounds like it could lead to a smaller vocabulary, but don’t blame technology for not making time for your children.

(via Daily Mail and Eureka Alert, image via Brad Flickinger)