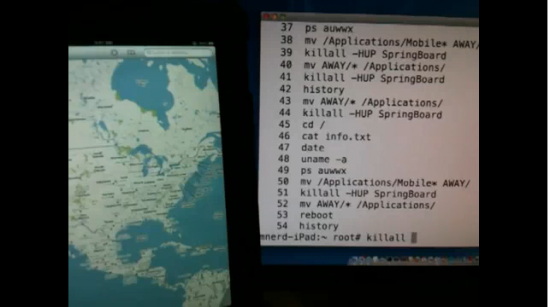 Two weeks ago, hacking superstar geohot posted a video of an untethered jailbreak for the iPod Touch and iPhone 3GS, and hinted that it would “probably work on the iPad too.” Well, we’ve just gotten what appears to be our iPad jailbreak alright, as expected — but it came not from geohot, but from a different camp.

MuscleNerd, a member of the hack-happy iPhone Dev-Team, posted the video to YouTube yesterday. According to the upload description, the video shows “very early work on porting “Spirit” jailbreak by @comex to iPad.” What we do see in the video (h/t iHackintosh) is that they’ve already been able to achieve root code execution on the iPad, which means that it is effectively jailbroken, but it might not yet be stable.

CrunchGear recently wrote about a host of reasons why they’d be interested in an iPad jailbreak, including Apple’s monopoly over accepted apps and what they say will be users’ ability to finally use the iPad as a real computer.