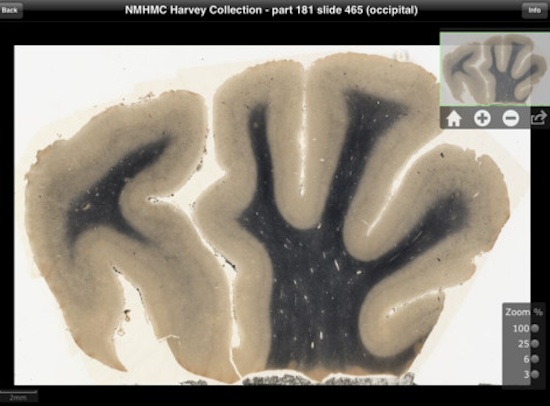 Who among us hasn’t wanted to poke Einstein’s brain at some point? It’s every nerdy kid’s dream, as well as a really good way to get kicked out of some pretty classy archives. Thanks to a new app from the National Museum of Health and Medicine Chicago, anyone with an iPad and some kind of morbid inclinations can gawk at the brain that changed modern phsyics — and in HD, no less! The catch? It’s going to run you a couple of shekels to do so.

The new app lets you navigate slides of the famous physicist’s brain that were imaged shortly after his death in 1955. The slides are one-of-a-kind and rather fragile, so until now, access to them has been tightly restricted. Thanks to the magic of the Internet, though, anybody with an iPad can now go satisfy their curiosity about exactly what the finest brain in the history of mankind looked like up close and personal. But first, there is the small matter of the bill.

It’s going to run you $9.99 to look at Einstein’s brain, which leaves us with some very, very mixed feelings. We understand that in today’s funding climate, institutions like NMHM Chicago need to find new ways to turn a buck just to be sustainable and keep employing a bunch of generally awesome folks. Making money is going to be more and more part of the gig for non-profits of all stripes, and it’s refreshing to see places like this get that and think outside the box about how they can turn a profit. Taken with the fact that $9.99 isn’t really that out of this world — especially when a lot of folks who want or need the app will be able to get the research or academic institutions they work for to pay for it — and it’s hard to get in an uproar about the cost to enter.

So please take all that into consideration when we say that there is something about charging money to learn more about a thing that just feels like it should be a shared treasure of mankind that is just unseemly. It just feels wrong to charge cash — even less cash than pretty much any museum admission out there — to learn more about something of such historical import to the world at large. We’ll allow it, for the reasons outlined above, but we won’t feel particularly great about it.

If you’re interested and have a couple bucks to burn, you can get a look at the big brain of big brains — where else — at the App Store here.