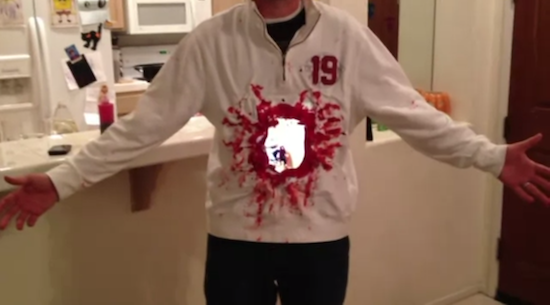 Mark Rober needed a Halloween costume, and had two iPad 2s instead, so he strapped one to the front of his shirt, strapped another to the back, cut a hole on each side of the shirt to show the iPad screens, smeared some fake blood around the holes, then connected both iPads via FaceTime, and made a very expensive Halloween costume that looks like he has a hole through his body. The FaceTime display of one iPad shows what the other one is seeing, thus simulating the hole-in-the-body visual. If you’re at a place with subpar Wi-Fi, Rober suggests you carry a mobile hotspot, thus allowing FaceTime to work as smoothly as possible, and making the costume even more expensive.

Though it doesn’t take a rocket scientist to figure out this little trick (modder Ben Heck did something similar a year ago), Rober actually is a rocket scientist — he works for NASA’s Jet Propulsion Laboratory. Video of the costume below.