Is There an iOS Apple TV in the Works? 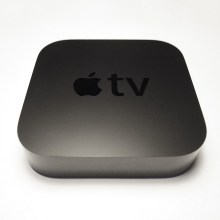 Take a look inside the iOS file system and you’ll find a reference to “Apple TV 3,1.” This is somewhat odd, since the current version of Apple’s media streaming box is “2,1” and could herald the arrival an all new version of the device.

The folks over at 9to5Mac believe that this is evidence the device is currently being tested and think that a new version would be a major upgrade to the project famously referred to as a hobby. They anticipate, though they have no evidence, the addition of an A5 dual-core chip, a boost to the RAM, and 1080p playback. The possibility of iOS running on the device is particularly tantalizing since that would give more users access to their apps and games in a new context, though Apple’s experience with the Pippin might be a sign that this is a foolhardy hope.

Despite previous upgrades, and the rise of streaming devices like the Roku, consumers have remained pretty cool about Apple’s offering. So perhaps the most pertinent question about an Apple TV upgrade will be if anyone will care should one materialize.