Investigation: Could Ariel From The Little Mermaid Read and Write?

And if so ... why didn't she use that to communicate!? 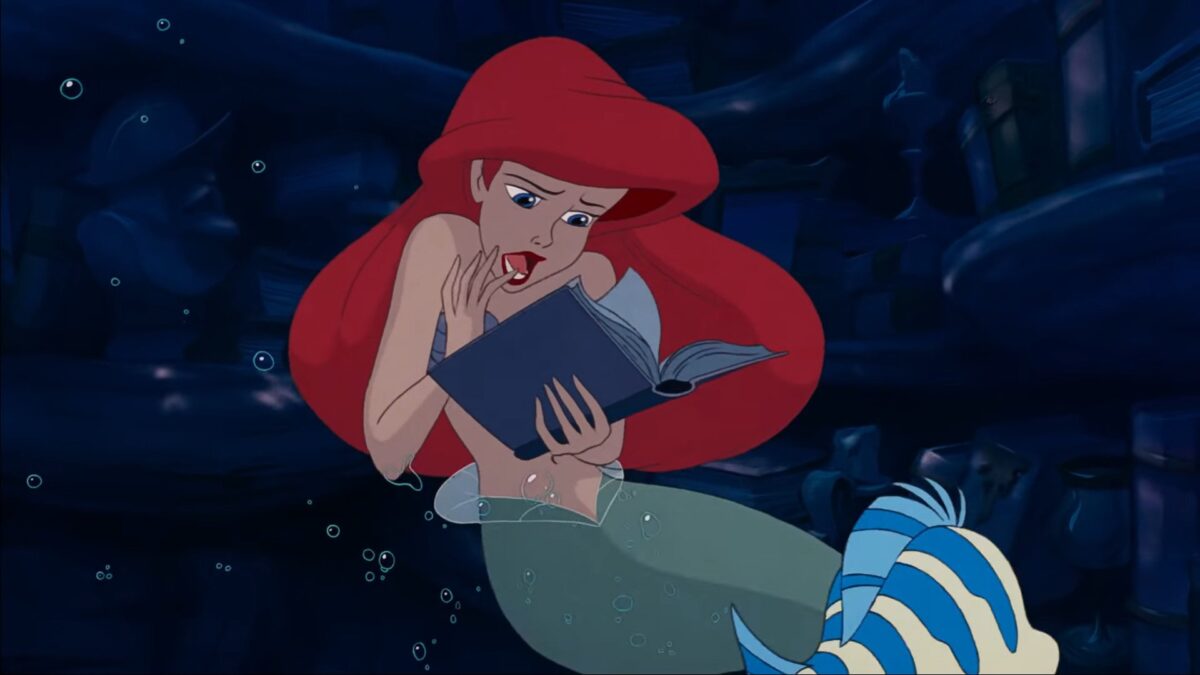 Yesterday I was, as often happens in the wasteland of 2020, humming along to the song that was playing in my head. For the first time in weeks, it wasn’t the Spirit Halloween theme song. It was “Kiss The Girl” from The Little Mermaid. I don’t know why—I think I might have seen a seagull—but the lyric about how “she don’t got a lot to say” struck me because … couldn’t every problem in The Little Mermaid be addressed if Ariel had just, you know, written Prince Eric a NOTE?

So … could Ariel read and write?

I mean, she does flip through a book in “Part of your world,” as seen above. If she could read, she might know a bit more about the human world, I guess, but hey, who knows how deteriorated the ink and pages are in a book that’s been underwater for years? But, I think the answer I think is … yes. And I feel like I just broke my favorite movie from childhood.

Now, the evidence in the column of “Ariel can’t read/write” is pretty strong in that she never slips Eric a letter saying, “Yeah, I AM the girl who saved you, and I’m under a curse but let’s smooch.” And don’t tell me that would be cheating on her deal with Ursula, because there are no rules there as is clearly shown by Ursula’s own attempts to cheat.

But it’s the deal with Ursula that makes me certain Ariel can read and write because she literally signs a contract with her name!

Look at that fancy signature. Why did she have to wait for a talking crab to whisper her name in Eric’s ear if she could have just written it down? That contract is clearly written in English, so I guess written language with mermaids IS a thing?

So, if Ariel can read and write (which my colleague Rachel Leishman tells me is confirmed in the animated series), why doesn’t she use this skill to communicate? I think I know, and it’s going to be hard for some of you to take this, but I think the real person who can’t read … is Prince Eric.

At first, that doesn’t make sense because, heck, he’s a prince. He’s rich and he must have been well-educated, but Eric clearly was never into his princely duties and would rather be out at sea or playing his little pipe thing. He’s not a king, by the way; he’s just a Prince with no father around, so maybe he was sent off to that coastal castle because his snobby royal parents were ashamed of his illiteracy. I bet things were not smoothed over when he explained his new wife was 16 and used to be half tuna.

The most important thing in any relationship is communication. That communication doesn’t need to be verbal, and of course; don’t underestimate the importance of body language, but really, Ariel either forgot she could write, which is bad, or ended up the child bride of a guy who can’t read, which might have been worse?

This is what happens when you get all your advice from shellfish, I guess.