Review: Invader Zim #1 From Oni Press – Zim Is Back 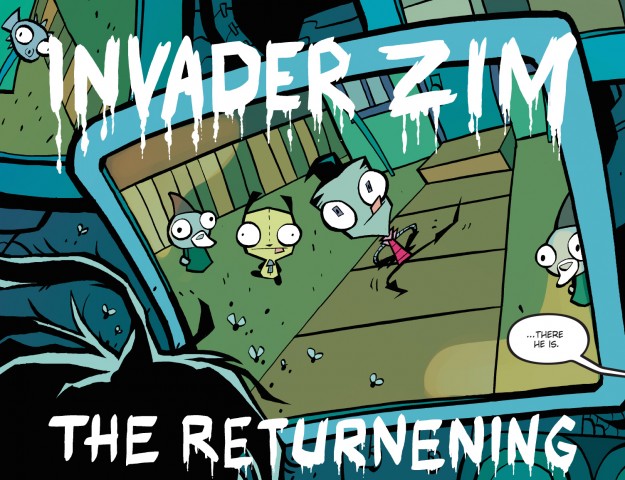 I’m a huge fan of Invader Zim, have been since I was introduced to the show just after I moved to Canada. I devoured it; Zim was different than any cartoon I’d seen, and it’s stuck with me over the years. Now, Oni Press are publishing a new series of Zim comics that carry on from where the TV show left off—this time without the interference from Nickelodeon and the restrictions of animation. When Invader Zim first aired way back in 2001, the show was a departure for Nickelodeon. They wanted more adult shows to increase their audience, but I’m not sure they knew what they were getting with Jhonen Vasquez. Zim was different; the art is stylised, as is the colour pallet and the voice acting (Zim was voiced by Richard Horvitz who strained his voice shouting Zim’s lines). Invader Zim was unique.

While Zim’s critical acclaim was high, the viewing figures were not; the show won an Annie Award, an Emmy Award, and a World Animation Celebration Award, with nominations for six further Annie Awards and a Golden Reel Award. Nickelodeon had something special that they didn’t want; Invader Zim was expensive and the returns were not immediate. Jhonen hated working for Nickelodeon, calling it an ‘Absolute misery’, and as season two started, Nickelodeon slashed the show’s budget. The production team burned through what they had on CGI, leaving little left. Due to this, the animation in season two is rougher than the first. 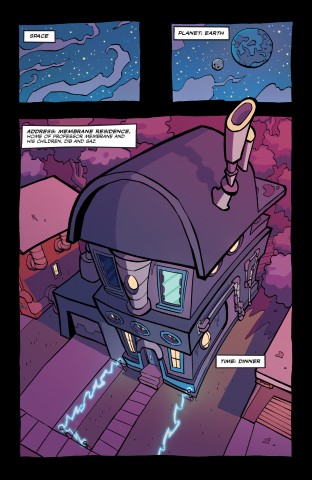 Nickelodeon put Zim on hold, and then canceled it. The rabid Zim fanbase never left, and the show’s popularity not only endured, but grew. The 2010 reruns of Zim got the second highest ratings on Nicktoons, and previously unaired episodes were still coming out until 2011. InvaderCon, a con dedicated to the show, ran for years. Numerous attempts were made to revive Invader Zim, but Nickelodeon has deemed it ‘too expensive.’

But now, fourteen years after it first aired, Invader Zim is back! Oni Press have apparently plied Jhonen Vasquez with a mixture of happy gases (78% N2, 21% O2) and money, allowing them to release all new Invader Zim comics. This is the real Zim, not a New Coke and not a cash-in; Jhonen has written issue #1 and is committed to more. The cult of Zim may rejoice! May we all make bacon-soap, cupcakes, chow at Bloaty’s Pizza Hog and be lemony-fresh while singing the Doom song.
“I’m always confused when people say how much they miss Invader Zim because the show never stopped running in my head, and then I remember everyone else isn’t in my head,” Jhonen said in the Oni Press release—it kept running in my head too, Jhonen *sad sniff*. As well as the creator himself, many of the original team behind the show are back, such as Aaron Alexovich, Eric Trueheart and Rikki Simons. 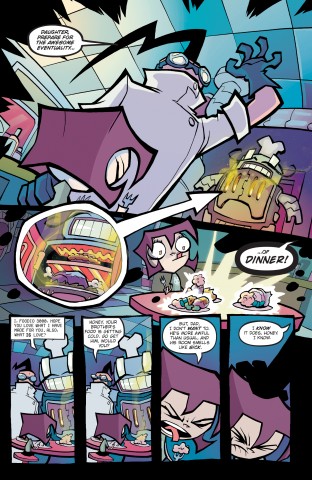 A great creative team doesn’t always mean a great comic, so is this new Invader Zim worse … or better? Oni Press sent me a preview copy, and if you liked the over-the-top nonsense of the show, you’re going to enjoy the comic too. The art in issue one is by Aaron Alexovich and the writing by Jhonen Vasquez. The art has that loose stylised look that’s very Zim, with the distinctly limited muted colour pallet provided by Simon Troussellier.

At the start of the comic is a recap entitled “Previously on Invader Zim,” two pages of catch up for casual Zim-fans or new readers. The story proper opens with Dib, Zim’s perennial arch nemesis, waiting for Zim’s reappearance. It’s been years, and Dib is unfit, fused to his computer chair, and unable to challenge the resurgent invader flanked by his robot sidekick Gir. 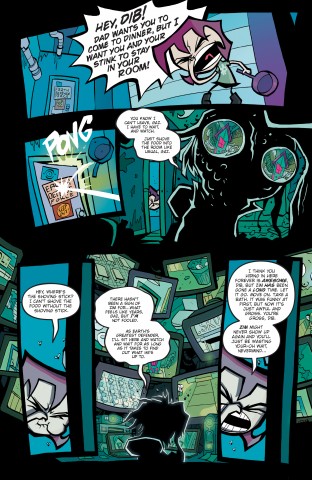 The story in issue one is simplistic, but it’s the introduction back into the sticky, fetid bosom of Jhonen-world, and it ends with Zim’s Voot cruiser vanishing off into space pursued by Dib. I get the feeling that freed from budgetary constraints and network oversight, we’re going to be seeing a much bigger Zim universe. *Zim voice* But I have questions. QUESTIONS! */Zim voice* So it’s years later, why isn’t anyone older? Why is everyone doing the same things as years ago? I’m guessing the school phase is over with so that plot device is gone.

There is so much I want to know and see in this new phase of Zimness. Right now, it’s a universe of unanswered questions and possibilities. Of course, it could go off the rails fast, but no sign of that so far; I’m really looking forward to following along for the ride. With so many alternate covers, you might end up buying more than one copy of Invader Zim #1, and that’s not a bad thing. 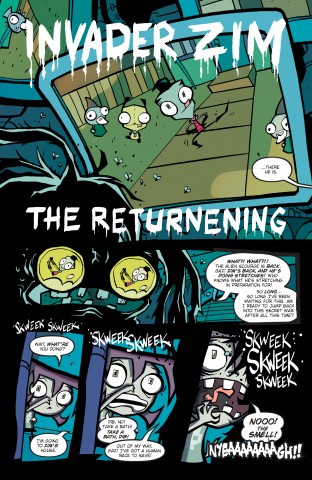 When I start picking up a new series, I follow the five-issue rule; I commit to buying the first five to see if it grabs me. For example, Howard the Duck is on my buy list, but when 5 rolls around, it’s likely to be axed. Invader Zim #1 is a must buy, and I recommend the five issue rule to see where it’s going.
Zim #1 comes out July 8th from Oni Press, and thanks to Oni for the review copy of Zim. This article co-written by Pustulio.