Into the Spider-Verse Sequel May Have Found Its Spider-Woman in Issa Rae! 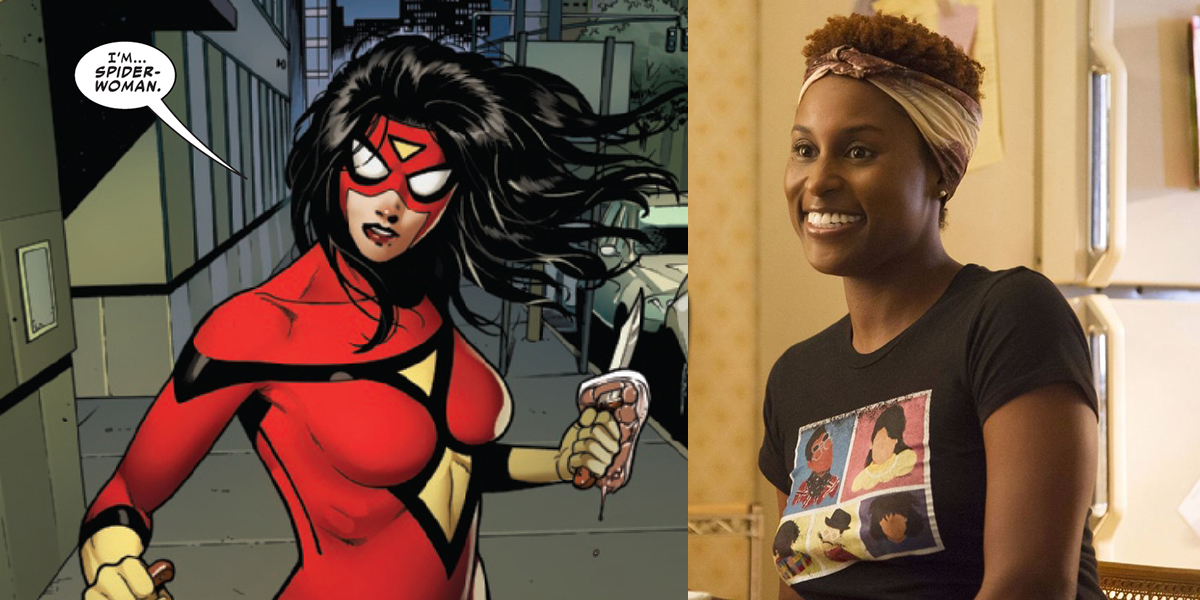 Jessica Drew is Spider-Woman, a badass character in the world of the Marvel Comics spiderlings who I love with my whole heart. We haven’t really seen her hit the screen yet and there are rumors that Jessica Drew could be the main character in Olivia Wilde’s “female-centric” live-action Spidey movie for Sony. But other than those whispers, we haven’t heard much on the Spider-Woman front. Until today. As always, Spider-Man: Into the Spider-Verse has our best interests at heart and we may be seeing Drew’s introduction into the sequel with Issa Rae (potentially) voicing her!

According to The Hollywood Reporter, Rae joins the cast from the original Spider-Verse which also includes Oscar Isaac’s Miguel O’Hara (who was introduced at the very end of the film), Hailee Steinfeld’s Gwen Stacy, Jake Johnston’s Peter B. Parker, Shameik Moore’s Miles Morales, and more. According to THR’s sources, Rae will be playing Drew, but there’s no official confirmation on that yet. Even so, having Issa Rae in Spider-Man: Into the Spider-Verse 2 in any role is an exciting addition to the series. Rae is the co-creator, co-writer, and star of HBO’s highly acclaimed Insecure, which should have won all of the awards.

Fans flocked to the first Spider-Verse film with open hearts and it instantly became a favorite among Spider-Man fans. It may well be a perfect movie. Getting to see so many of our spider-friends all together and working to stop Wilson Fisk (Liev Schreiber) was amazing and the movie did an incredible job exploring what each of these characters looked like in their respective comic worlds and how those different artists would come to life in a multiverse. While animated, the film also featured New York City as a vibrant character few other superhero properties have been able to nail down.

While we were teed up for a sequel by the end of Spider-Verse, we still don’t know who they’ll be taking on next. Or what, for that matter. After the team destroyed Fisk’s machine that Liv Octavius (voiced by Kathryn Hahn) built for him, they all went back to their own worlds. But as Miles Morales laid back down in his bed, finally coming into his own as his version of Spider-Man, we could hear his lovely Spider-Family all talking to him from a portal in his room.

Now, with the sequel in the works and slated for October 7, 2022, it appears that we’re getting more of other universes’ Spider-Men/Spider-Women. It’s going to be interesting to see how the dynamic shifts. And including Issa Rae in that, as Jessica Drew or anyone else, is exciting and A+++ casting. Rae became a household name with Insecure and continues to show us all just how incredibly talented she is.

I’m so excited for Spider-Man: Into the Spider-Verse 2 and what Issa Rae is going to bring to the table! Even if we have to wait over a year for the movie.

Issa RaeSpider-Man: Into the Spider-Verse 2Spider-Woman