When I sat down to talk with Matty Beckerman, director of IFC Midnight‘s new horror movie Alien Abduction, I honestly wasn’t expecting him to be such a firm believer in visitors from outer space. But Matty has personal experience with the Brown Mountain Lights–a bizarre phenomenon in North Carolina that he says is “bigger than Area 51.”

Matty talked to me about what he’s seen in the night sky, why he chose to release a found footage movie in 2014, and why, as the movie’s viral website says, “when the lights are seen, people go missing.”

Alien Abduction comes out tomorrow on VOD and in limited theatrical release. Check back here then for a review. In the meantime, if you’re intrigued by the Brown Mountain Lights, the sixth season X Files episode Field Trip investigates the phenomenon. Careful: it’s a spooky one. 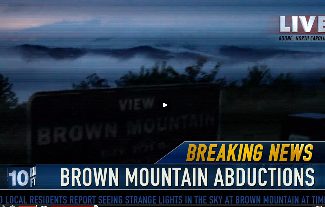 Carolyn: What drew you to doing this project?

Matty Beckerman: I had lived in the mountains of North Carolina and the legend of the Brown Mountain Lights dates back over 800 years to the Cherokee and Catawba Indians. It’s real, I’ve seen the lights myself, I’ve videotaped them, I’ve taken pictures of them and there are hundreds of stories. I think the Brown Mountain Lights is bigger than Roswell, it’s bigger than Area 51, because while you can go to Roswell and look up at the night sky and try and see something at Brown Mountain you actually might.

Did you experience events while you were living there that convinced you aliens were responsible for the phenomenon?

It’s really people I had worked with and met who had told me stories of people being abducted. And I interviewed a bunch of locals and put them at the front of the film.

So you definitely believe in aliens and alien abduction then?

Yeah. Even today I got an e-mail from a woman who had seen the lights her whole life and has been abducted. Through my website people are now finding out about the movie. 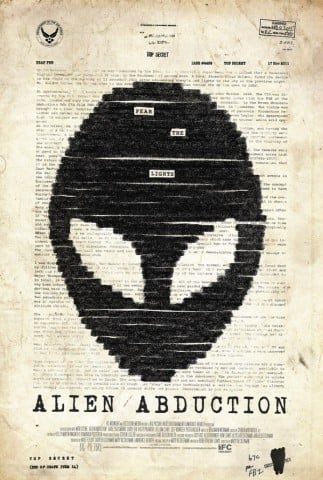 I know you didn’t write the movie, but is there something about the found footage sub genre that you thought would serve telling the story of the lights well?

Yeah. The story is told through an autistic child. There’s a psychologist I talked to who had a patient that was autistic and would use a video camera almost as a means to communicate to the rest of the world. That’s how he would see everything. It was a great medium in a way to tell this story. And a great reason why he would keep the camera on. Most people in that situation you know would just drop the camera and run. But if you really, like this child who is a very real person, sees the world this way, communicates to the world this way, you’d keep that camera going.

Was the Morris family based on a specific incident?

Yes, there’s a family who went up to the Overlook, I mean there’s markers on the side of the road up there that actually say Brown Mountain Lights look this way. So the family went up there to check out the Overlook and look at the lights. And a giant orb showed up over their car and chased them down the highway. So this is a report that their police had put together locally and a police officer actually came out talking about it. I interviewed him, he would not allow me to put the interview in because he was afraid of the scrutiny he would come over from his colleagues. You’ll find this story on the Internet. They’re out there.

Am I correct in thinking that the FBI has conducted an investigation in Brown Mountain?

Yes. Several times. There’s been three times that the US Government has investigated the lights, including Project Bluebook which was an organization in the 1950s that was set up in order to debunk UFO sightings and the lights were deemed unexplained. Scientists, National Geographic have gone up there to scientifically study what the lights could be. It’s a great little documentary, it’s out there on brownmountainlights.com

The most effective scene for me was when the Morris family comes across all the abandoned cars in the tunnel.

Well that scene specifically, when you’re driving through the Appalachian mountains there are these tunnels that go through these mountains. And specifically on the Blue Ridge parkway I always viewed it as a big trap. Almost like an animal trap where you block one side of an area off, you get the animal to go into it, then you block the other side off. That’s what these aliens were doing, they were blocking one side off of the tunnel to trap people. And the set was incredible, it was already there. That tunnel exists in Bryson City, its called the road to nowhere.

It’s a scary tunnel and it goes on for…I think it’s 1,000 yards. And it’s abandoned. Its just this abandoned  tunnel in the middle of nowhere.

Would you ever spend a night alone camping in the Brown Mountains again?

I would, only because I’m curious and crazy. People do all the time, there’s great stories of people going out there and doing it.

If it is in fact aliens that are responsible for these disappearances, what do you think their aim is in abducting people?

I think it’s similar to what we do as human beings to other creatures like dolphins in the wild or what they’re doing at Sea World with the whales, they’re studying us for scientific research, the same way we do it to other creatures.

(images via IFC Midnight and brownmountainabductions.com)