"I don't ever walk into a room and say 'Oh, here comes the woman.'" 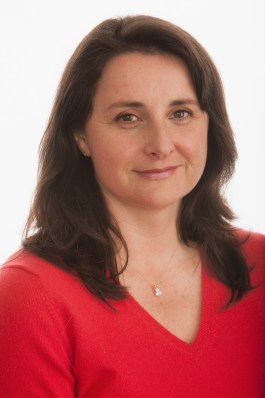 Victoria Alonso may not be a name you’ll immediately recognize, but she’s been a key member of Marvel Studios since the company kicked off its connected cinematic universe with the first Iron Man film in 2008, and she’s produced every Marvel film since then. A former visual effects chief within the company, she’s been a strong advocate for more women in the visual effects field and, according to Variety, earned a reputation for creatively controlling VFX costs while developing a global VFX network for the company.

When we last covered her in 2015, the Buenos Aires native had been promoted to vice president of physical production—one of the few women to ever hold that position of power at a major studio. Now, she’s opening up to The Mary Sue about her incredible experiences, how she plans to empower women and other diverse voices, and she also gave us an update on the Captain Marvel film.

You recently produced Captain America: Civil War. Where can we see your touches in that film?

On screen, the team is splintered because of differing opinions. Were there any disagreements behind the scenes?

We disagree every day and that’s what makes a strong product, I think. We’re not a bunch of “yes” people. We’re a bunch of “Really? Really?!” [people] so we question everything all the time. I could tell you that every scene, every word, every action, every fight in the movie or every piece of dialogue has gone through an erosive process of observation by all. We all go, “Is that the right thing? Is that the right look? Is that what he wants to say? Why does she do that? She would never do that. What?” There were a lot of taking sides, questioning choices… So there were a lot of far more political conversations happening with us that are there in the movie. But if you just wanna see superheroes having a moment, you can see that too. That’s what I love about our movies. There’s layers. And I think that if you’re 12 or 14 and you don’t care or you can’t yet see the layers, it’s okay. But if your [adult family members] are there and they wanna see the layers, they very much can do that.

Tell me more about Marvel’s STEM internship for girls.

We started it with Thor: The Dark World and we will continue to do it. We are incredibly supportive and involved and I, personally, am a big voice on women in science, technology, engineering, arts and mathematics. The Geena Davis Foundation has a phrase that “if you can see it, you can be it” and I think it’s super important to just spread that word because the more women that are there for the young adults and young children, young girls [get] to see that it can happen and it’s a possibility for them. And it’s the door that is open, they just don’t know it.

What would one need to do to be considered for the internship?

They need to check the Disney website. They consistently put out reminders and they put out ads. My commitment is to do it with every movie. It’s hard to do two or three a year but at least one a year, for sure. And you know, these girls that come to us are incredibly bright, incredibly resourceful, and have a vision that we should all be so lucky 30 years older. They’re anywhere between 15 and 18 and they have the greatest ideas. So we want to nurture that and put it out to the world. When they come to us, we have long conversations and they get to meet a lot of female professionals that are in positions of making change and trying to continue to break that glass ceiling and…they get to see that because they have no idea that some of these jobs exist. So we want to open up their horizons with what we are doing.

You’ve produced every Marvel movie since Iron Man. How does one do that?

Well, sleep is overrated. You just don’t sleep ever again. And on top of it, I had a baby. It’s a crazy thing. You know, it’s about multitasking. There’s things that you can do…we created a beautiful machine that is incredibly efficient and very very lean. Lou [Louis D’Esposito], Kevin Feige and myself, we run the machine and we have an incredible shorthand, trust and respect for one another. And above all, we love each other like brother and sister and we get each other…Kevin has his vision of what this universe should be and the three of us came on board, we did it together. But it takes a lot of care and a lot of planning and a lot of people. I mean, we don’t do it alone. My gosh! Anywhere between 3,000-5,000 people worldwide work on our movie at any given time. So, we do it with the help of the incredible craftsmanship that comes from every part of the world. So it’s a privilege, really.

Did you always know that you wanted to produce movies?

I knew that I wanted to tell stories. I wasn’t sure what form. I thought it was gonna be in the theater because that’s what my heart is incredibly geared to but I didn’t think I could do it in LA. I had to move to New York and I was in LA. So I figured it would either be television or film. I did five years of commercials and then I landed on film and never left.

What’s it like to be a female producer in a male-driven profession?

I don’t ever walk into a room and say “Oh, here comes the woman.” I don’t ever think that my opinions are not heard because it’s the opinion of a woman. I’ve never had that chip on my shoulder. I walk in the room and I’m just glad to be one of the smart people to have a part and have a seat at the table. There’s times where perhaps it’s been difficult and I wish there was a little more balance, that [things] were like 50/50 because I think that’s a healthy balance. I don’t want a company of all women, by the way. I just think that the balance that we create with each other is a beautiful balance and that’s what I urge everyone. Balance is healthy. To have different opinions is healthy. To have people from both sides is healthy. To have people with diverse backgrounds is healthy and it’s good and it’s what the world is. I haven’t found it particularly difficult but then again, not very much gets under my skin.  I pretty much shrug it off and keep on going. I always say that on any given day, I give about 1,000 opinions and 998 don’t stick. So at the end of the day, I just do the math and I go “well, two of them were good” and I move on.

That’s an amazing mindset to have.

If I don’t do that, then there’s no point in showing up every day. Progress happens when people show up. And you show up and you give it all you got. And if all you got that day is two good ideas, well, gosh, that’s a whole lot. I mean, two good ideas could actually make a big change. In baseball, I would suck. My batting average, throw me out! But I’m not playing baseball so it’s all good.

How do you think Marvel is doing in terms of diversity and female representation, and what would be your goal for the future?

I think we have a lot of work to do. I think this is a good beginning, we’re chipping at it but it’s a big mountain and I feel like we’re a little behind in our chipping. So all hands on deck to make sure we continue to make an impact, we continue to empower women and we empower diversity and we empower all kinds of people because everyone has the inner strength to become a superhero. I will not rest until we have the first female superhero movie on the screen and I hope it’s the first of many to come. And I hope DC Comics does the same thing. And I hope every other studio does the same thing because we need to have more of it. Forty percent of our fans are women, so we’ve been failing them. We gotta make sure that we don’t. We gotta get out there and make sure that 40 percent as well as the other 60 percent will be delighted by awesome, powerful women telling great stories. So it’s a good beginning, but the progress that we need to make is far more than what we have made.

How far along are you with Captain Marvel now that Brie Larson has been cast?

We have an incredible performer in Brie Larson and a devoted woman to hold this banner which is a heavy one, I have to say. We’re in early conversations. We have writers and we are trying to get a script done. We don’t have a director yet, but it’s coming. It’s all coming.

What advice would you give to young girls who want to break into the business like you have?

I would say that every door that closes means that you have to turn around…You never know what the door is…Don’t take no for an answer. Keep on going. And then eventually, you will find your way. There’s no straight line to this career. A lot of us meander for quite some time. A lot of us get denied, rejected and told no a million times. But once again, if you try a thousand times and two of those times stick, then you can have a career. Don’t give up. Keep on trying. And always remember that whoever you are gets defined by you and not by the people that are around you. It’s not what you do that defines you. It’s who you are. That you take with you, regardless of your career, your power or your success. Eventually, it all fizzles and what you have left is you. So protect the you and live the dream.