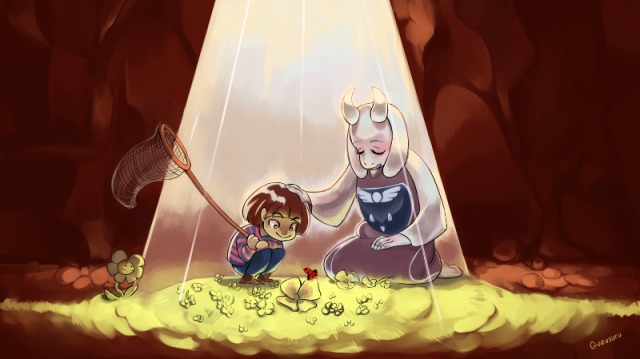 In less than three months since its release, Undertale is a game that has made a big impact in the gaming community, and left fans with a lot of mysteries to crack. Since this is an RPG that can be completed without killing anyone, what’s the secret to ending the next fight peacefully? What’s the story behind the protagonist, who is never even identified with any gender pronouns? And why are there so many freaking dogs in the game?

Events surrounding the creation of Undertale are just as intriguing. The majority of the game was made by just one guy, Toby Fox, who completed the game at just 23 years old. It was made on a budget of just over $50,000 thanks to a successful Kickstarter campaign. Yet at this year’s Game Awards, Undertale was nominated in three different categories, including Best RPG, where it sat beside games like Fallout 4, Bloodborne, and The Witcher 3 with their budgets big enough to make Hollywood movies on. It feels like there has to be some explanation to crack for how some humble looking indie game could become so popular basically overnight.

I’ve read or listened to all the interviews Toby has done that I could find, which allowed me to learn two important things in crafting my own questions for him: first, he seems to prefer to let his game speak for itself, so he probably wouldn’t be interested in answering anything about Undertale’s story. Second, by his own admittance, he hates answering questions for interviews.

Chris Isaac (TMS): One of the most unique things about Undertale is how you gave the player a route to complete the game without killing anyone. Since RPGs are so story-based and about player choice, why do you think that option isn’t more common?

Toby Fox: Because it’s way more complex to include it as a potential option. Also, hurting things is normalized and has loads of established ways to make it feel fun. You really can’t just do it.

TMS: Was the story of the game something you had been thinking about for a while before starting development, or did it all originate after figuring out the battle system?

Toby: After [the] battle system.

TMS: You seem to have strong thoughts about how battle systems work in games. Like I know you designed Undertale to be able to be completed without any grinding, but you’ve also said you feel your battle system is one of the less strong aspects of your game. What did you want to achieve in making your system that you feel is lacking in the genre?

TMS: Some of your humor is just silly jokes, but other times you use it to criticize and poke fun at game tropes that go unquestioned. Did you go into making the game planning to use jokes in that way, or did it just naturally work out like that?

TMS: You’ve said the Mother series and the Mario RPGs have been influential on what you wanted to create, but are there any recent games that have captured that same excitement for you?

TMS: I know before Undertale you were more known for your music, and it shows with how great the soundtrack is for the game. What musical inspirations would you say have influenced your songs?

Toby: I try to be inspired by everything I listen to.

TMS: You’ve stated the original game was only supposed to be about two hours long. Did the longer game time come from wanting to implement new ideas along the way, or is just hard to estimate how long an area will take to play out?

Toby: Both, pacing doesn’t work when it’s that short.

TMS: Outside of Undertale’s popularity, have fans reacted to anything about the game in a way that you totally weren’t expecting?

TMS: Did you hear about Undertale’s mention on The 700 Club where a mother found a picture of Sans on her child’s phone and wrote in describing it as demonic? Any reaction to the irony of the host advising the mom to look for games with less violence and brutality?

TMS: Since you’ve been successful with your first outing in releasing an original game, is there anything you’ve learned from the process that you’d tell other aspiring developers? 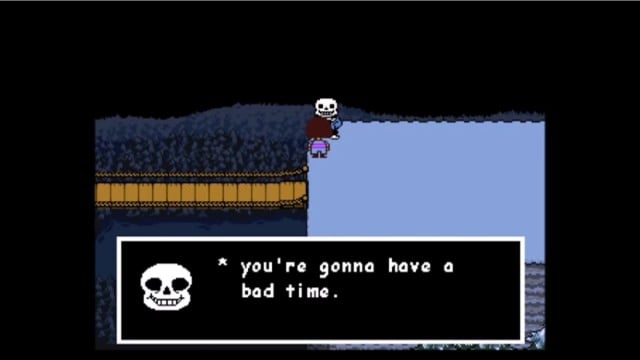 As I said, I’ve kept up with Toby’s interviews, so I’m not surprised he was tight-lipped here. He seems to want people to largely draw their own conclusions from his work, and seeing the numerous examples of creators and authors who can’t resist jumping into conversations to explain what they actually meant, I can respect Toby’s restrained style.

He’s left little nuggets of information elsewhere, like at The Escapist where he described the inspiration for his combat system, saying, “I feel that it’s important to make every monster feel like an individual. If you think about it basically all monsters in RPGs like Final Fantasy are the same, save for the graphics. They attack you, you heal, you attack them, they die. There’s no meaning to that.” Or at The Existential Gamer where we seem to get a glimpse of his design philosophy when he said, “The addictive quality of ‘numbers increasing’ is what drives a lot of games. But some of the most important things in life can’t be accurately represented by numbers.” But like in Undertale itself, you might never get answers for some things.

Even though Undertale didn’t wind up winning in any of the categories at The Game Awards, it’s definitely made an impact among gamers. Before the ceremony even took place, Toby made it clear that that was more than enough for him.

Hearing “UNDERTALE made me want to be kinder” or “UNDERTALE helped me through a dark time” feels more valuable than any award or score.

If for some reason you haven’t checked out Undertale yet, it is currently available for computers, and may lead to you dating a skeleton, being on a quiz show, and petting multiple dogs.

Chris Isaac is a pop culture and fiction writer from Philadelphia whose work has appeared in such places as the Philadelphia Inquirer, and USA TODAY College. If staying up to date on his missteps in video games, stories about pirates, and pictures of a chubby albino ferret interests you, you should follow him on Twitter.