Written and directed by Theresa Bennett in her feature film debut, Social Animals stars Noël Wells as Zoe, a woman in her thirties who can’t quite seem to get a handle on the whole “growing up” thing. You’re the Worst‘s Aya Cash co-stars in the film, and I had the chance to speak with her and Bennett during a recent press day for the film in Los Angeles.

Here is the official synopsis of Social Animals from Paramount:

Zoe Crandle’s life didn’t exactly turn out the way she planned. She’s facing eviction, her business is going under and she is resigned to a life of one-night stands. Just when it seems her whole world is unraveling, she meets Paul, a fellow loveable loser, and the pair have an instant connection. There’s only one problem, Paul is married. With help from her best friend, Zoe devises a plan to save her business and salvage her love life.

In addition to Wells and Cash, the film stars Josh Radnor (How I Met Your Mother) as Paul, Carly Chaikin (Mr. Robot) as Zoe’s bestie Claire, and a supporting cast that includes The Mindy Project‘s fabulous Fortune Feimster, and The Handmaid’s Tale‘s Samira Wiley in a hilarious turn as the most heteronormative breeder ever. 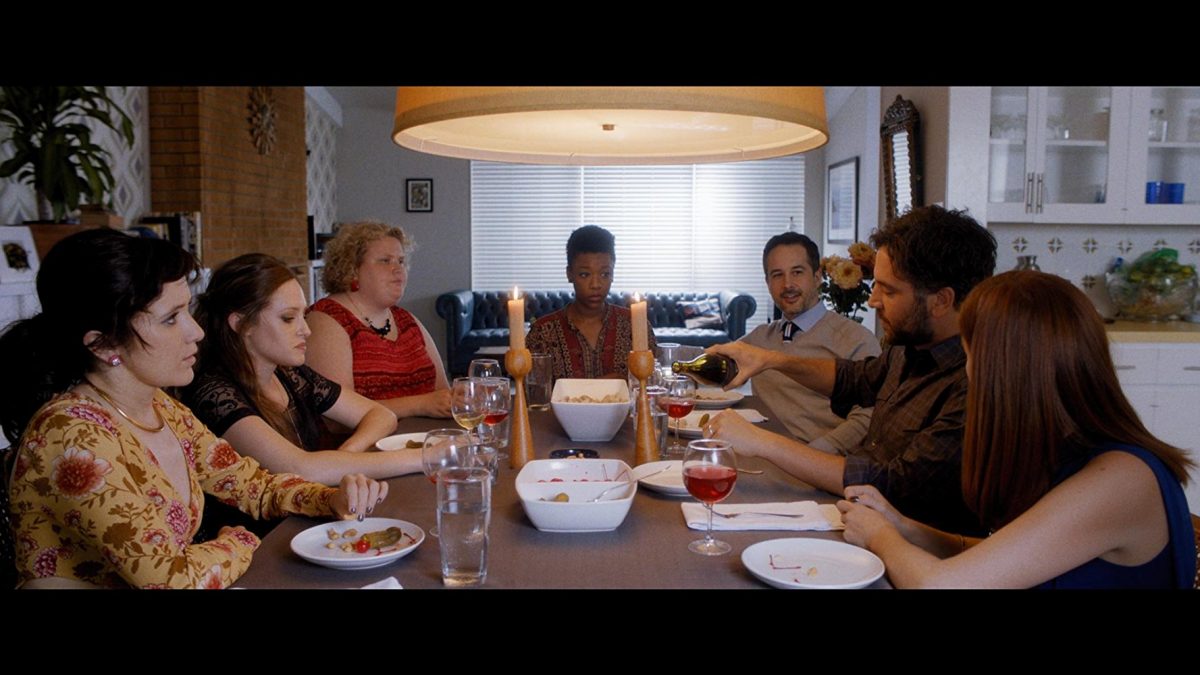 As the title might imply, Social Animals is a film about relationships, though many of the relationships in the film don’t exactly last. The script was originally called Fucking People, as in Can you believe these fucking people? The name stuck throughout the seven years it took to get the film made all the way to production, but because they had kids on set, Bennett decided to come up with an alternate title.

“I came up with Social Animals, because it means that human beings need contact to survive. And I’m also a very huge fan of the book The Social Animal by David Brooks. I thought that it felt true to the story and true to who these people were.”

Cash plays Jane, Paul’s wife who spends the film experiencing the slow deterioration of her marriage. She really connected with the role, because despite the fact that she and her real-life husband are still very happily married after thirteen years, Cash identified with the fact that, “When you meet someone, say, in your twenties, the things you’re attracted to and interested in are not necessarily the things that sustain you in your thirties or your forties.”

When you have children together, you become intertwined with your partner forever, whether the romantic relationship lasts or not, and Cash points out that “You’ve chosen someone who may or may not be suitable for forever. I think, despite all the other issues [between Jane and Paul], that’s the basic one. The human fallibility in choosing partners. They’re just not suited for each other, and she has become this person she doesn’t want to be in order to sustain the marriage.”

There are definitely relationship and life issues explored in the film that seem very specific to the current generation of thirty-somethings, and it feels so true to life, because in addition to drawing from her own experience in writing Social Animals, Bennett used what she learned from her previous career in reality television.

“I started interviewing all these women all around the country about their marriages, about their relationships,” Bennett explains. “And it really inspired me to make this film. I sat down with someone for this home design show, and she had the perfect life. She had 2.5 kids, she had the minivan, the whole thing that people want. I asked her What’s it like to be a mom? And I was looking for like It changed my life. It’s so inspiring. It’s the greatest thing in the world, but what she said was some kind of incarnation of a line that I created for Jane which was Sometimes I have to drive around the block two or three times before I even go inside, because I can’t believe that I’m this.

“And that just felt so honest to me, and it felt like something we don’t speak about as women. You feel like a failure if you speak that way. I wanted to open up a dialogue [about that].”

Alongside Zoe’s relationship with Paul, we also follow Zoe’s relationship with her best friend, Claire, who is engaged to a Republican who asks her to wear a George W. Bush mask when they have sex. On the surface, their dynamic is very much Fuck-Up Friend/Together Friend. However, what the film illuminates within that relationship is the fact that Claire doesn’t always have the answers, nor is she necessarily the best person to give advice.

“We look to our best friends to give us advice about the ways we’re fucking up,” Bennett says. “Or love in general, and we look at them as these messiahs of advice, but sometimes they’re not even giving themselves the right advice. Sometimes they’re saying things to us and to themselves that they don’t even believe.”

As much as the Austin-based Social Animals is about relationships between people, it’s also about people’s relationships to their city, specifically about how residents deal with gentrification. Bennett grew up on the Upper West Side of New York City, a place she watched gentrify throughout her time living there.

Originally, Social Animals was set in New York, because as she was writing it, gentrification was very much a hot-button topic in New York. As the film got to production, however, her neighborhood became gentrified and suddenly didn’t have the same fight in it anymore. After having visited and fallen in love with Austin as an “artistic hub” experiencing gentrification in a more acute way, she decided to set her film there.

If you’re looking for a totally relatable, female-led, female-created film to check out this weekend, I’d definitely recommend Social Animals, which you can check out in theaters, on-demand, or on digital, TODAY!