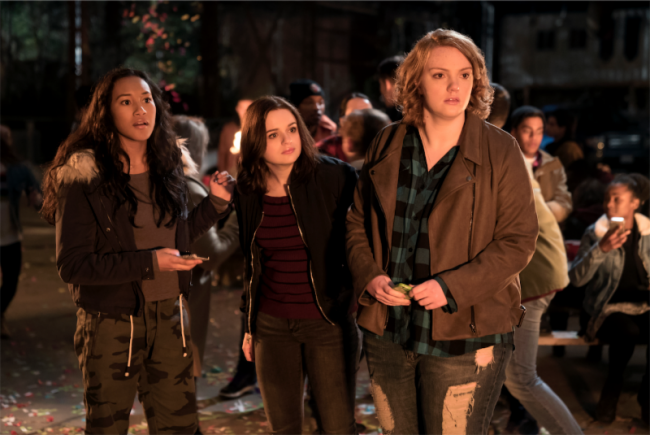 It’s been a hell of a year for Shannon Purser. Her star rose with the arrival of Netflix’s Stranger Things in which she plays Barb Holland, a 1980s “everyteen” who captured fans’ hearts damn near immediately and is a role for which she’s just scored her first-ever Emmy nomination! Add to that the fact that she’s just arrived in Vancouver to begin work on Season 2 of Riverdale and that she has a new movie opening this weekend, and it seems her life is showing no signs of slowing down.

Purser is an enthusiastic but serene presence on the phone, seeming to take all her newfound success in stride. When I congratulated her on her Emmy nod, she was chill and together and full of gratitude. She was traveling to Vancouver when she got the news, on a layover in Salt Lake City.

“I turn on my cell phone, and all these notifications pop up and I’m like, What happened? ” she explains. “I knew they were announcing the nominees, but I did not anticipate that I would be one of them. And then I got a call from my manager and my publicist and they were both, like, crying and freaking out, and I was freaking out. It was so wild.”

This nomination has come just as Purser’s new movie, Wish Upon, is opening. The film stars Joey King as a high school student named Claire whose dumpster-diver dad (played by Ryan Phillippe, who’s playing dads now. RIP Sebastian from Cruel Intentions) finds her an antique music box with Chinese writing on it. Turns out, this music box grants wishes. But not without a price. Be careful what you wish for…etc, etc.

What makes the film truly interesting is that it focuses on a group of nuanced teen girls. They’re not your standard “teen movie” characters, nor are they the shallow, vapid caricatures found in most horror films. This aspect of Wish Upon also seems to be what drew Purser to the project. That, and getting to work with someone she considers a horror legend.

“I love scary movies. I have since I was a kid, and I saw a lot of them, probably without my parents’ permission,” she laughs. “And I knew who John Leonetti was. I mean I loved his work. He did Director of Photography work on The Conjuring, which was so beautifully shot. And he directed Annabelle, which I saw. So he, since he’s kind of a legend in the horror world right now is really important to me.

Also the script. I totally love that it’s female-centric, and that we get this young, teen perspective of what’s going on. It’s not even just a gory horror movie. There’s a lot of emotion there as well. I just really appreciated that about the script and the story, so it was kind of a no-brainer for me.”

Purser also talks about the fact that having a cast that made up of actual teenagers (she recently left being a teenager behind as she turned 20 last month) lent the film an authenticity that is important to ramping up the sense of danger, unlike other films where you have actors in their mid-to-late 20s playing kids. She also loves the greater message of the film: that we should think about what’s truly important to us and be grateful for what we have, because when we continually wish for things that we think will make us happy, constantly bemoaning what’s missing, that way lies madness. 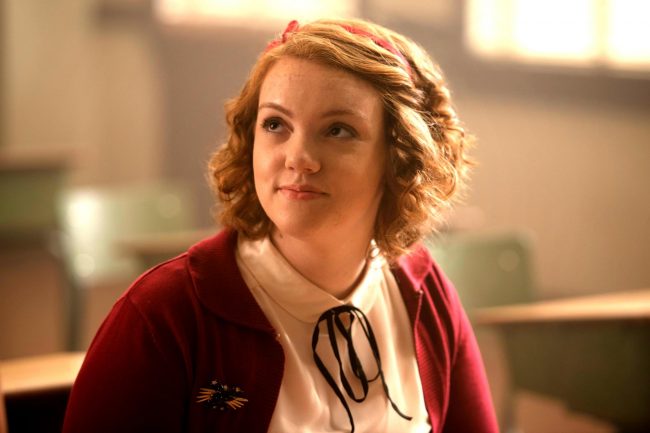 In thinking about Purser’s roles in Wish Upon, as well as Stranger Things and playing Ethel Muggs on Riverdale, I began to think about a recurring theme in all those projects. All of them depict both the good and the bad in female friendships, showing both how girls can be there for each other and lift each other up, as well as how they can bully each other and tear each other down, sometimes to the point of physical violence, as is true in Wish Upon.

Purser believes that accurate depictions of women, and particularly young women and girls, is important. She says, “I think we’re just getting to a point in the industry where we’re starting to see more well-written and directed complex roles for women. But I think, especially for young girls, teenage girls, there’s this misconception that we’re all dumb, or that we’re not going through real, tough issues. So, it’s been really cool to shed a light on that.

“More than anything, I don’t want to be in teen movies that don’t have any substance. So far, I’m very lucky to have gotten roles that do, and that have an important message. Whether it be just the reality of friendships, like Barb and Nancy, what it’s like to be in high school and feel awkward and lonely. Or with Ethel, and the idea of sexual harassment and slut-shaming, and how that’s unfortunately a very real reality for a lot of high school girls. It’s very important to me as an actress to play these powerful and important female roles, and I definitely feel really lucky that I’ve gotten to do that so far. ”

Since she’s currently filming Riverdale Season 2, I’d be remiss in my duties if I didn’t ask her for any tidbits about Ethel and the rest of the Riverdale gang. She says that she’s been getting the scripts very slowly, so it’s hard for her to tell exactly where Ethel is going.

“I definitely think in Season 1, they gave us a taste of Ethel, and that she has quite a lot going on in her life what with her father, and with her family’s financial situation, and then also the bullying at school. So, I wouldn’t be surprised if that came up in Season 2 as well. I don’t know if she necessarily has a ‘dark side,’ but there are definitely a lot more layers to her that may be seen on the surface.”

This Emmy nomination, whether she wins or not, will certainly open a lot of doors for Purser, and we talked a little bit about the fact that she wants to continue to seek out nuanced female characters that contribute positively to media representation. When I asked her if she had any particular roles or projects in mind, she didn’t hesitate at all in coming up with an answer.

“My dream role, really, there’s this book that I love to death called Eleanor and Park by Rainbow Rowell, and my absolute dream is to play Eleanor in a film adaptation of that,” Purser revealed. “And it’s actually a very big priority of mine right now to kind of see if we can make the wheels start turning and make it happen. Because that story has just impacted me very personally and I really feel strongly about my connection to the character. So yeah, that’s the dream!”

As talented, smart, and driven as Purser is, I wouldn’t be the least bit surprised if that dream, as well as any others she might have, totally came true.

Wish Upon is in theaters now!