Interview: Set It Up Breathes New Life Into the New York Rom-Com

When the trailer for Netflix’s Set It Up came out, the internet was abuzz: a delightful summer rom-com where we could watch Lucy Liu and Taye Diggs get together? Do we need anything more than that?

The film is out on the streaming channel today, and it’s ridiculously enjoyable. Set It Up is funny, charming, and lovable in the way that any decent romantic comedy should be. At the same time, it’s fresh and self-aware enough that nothing ever feels recycled. I spoke to producer Juliet Berman and director Claire Scanlon about how Set It Up creates relatable characters, realistic apartments, and the perfect casting of Lucy Liu as a tough sports journalist. (Some quotes have been edited for length.)

Set It Up follows two overworked assistants in their 20s, Harper (Zoey Deutch) and Charlie (Glen Powell), who try to set up their bosses Kirsten (Lucy Liu) and Rick (Taye Diggs) in hopes of giving themselves more of a break. Through their matchmaking, which includes trying to secure a trapped-in-the-elevator meet cute, sending presents on behalf of their boss and more, the two engineer a love story while also becoming close friends.

You can watch the trailer here:

Berman cites her personal experience as an assistant in the entertainment industry as the beginning of Set It Up. “Assistants kind of run their boss’s life and you don’t even know what your assistant does for you on a day-to-day basis”, she says, “you just kind know that everything kind of works because of this person. But behind the scenes, they’re really pulling all the strings. So I thought, ‘what a funny idea for two assistants to become matchmakers and set up their bosses kind of selfishly.'” When Berman eventually became a producer and her friend Katie Silberman (also an assistant at the time) a screenwriter, they decided to make the film for real. She pitched it to her producing partner Justin Nappi at Treehouse Pictures and they started developing a script.

“It finally came to fruition and also I got to work with my friends which was a dream come true,” says Berman. When I ask her about the team, which had a lot of women on it, she explains, “We just hired the best people for the job and we ended up with a very female-heavy crew […] But I think there is definitely a different kind of energy on set when you have a bunch of women vs. a bunch of men and it was really refreshing. I haven’t done a movie like this before and I loved it.”

Not just a love story

The personal roots of the story, along with the talented team, are perhaps what makes the story so relatable. “It’s a movie about people falling in love”, says Berman, “but it’s also about the sacrifices that you have to make to get ahead in your career as a woman and it’s a movie about figuring out what you really want and finding your voice and there’s all these other themes.”

In the film, both Harper and Charlie struggle with professional goals and personal fulfillment—while their bosses don’t make things easy, it’s clear during the film that they both have other things to address. Charlie seems to be chasing a stereotypical image of male success: beautiful model girlfriend, money, status, etc. without knowing if it’s going to actually make him happy. Harper wants desperately to be a sports journalist, but a huge fear of failure hinders her from making any progress. The joy of Set It Up comes from watching these characters get into hijinks, but also from how invested we are in their happiness.

Both director and producer related strongly to Deutch’s 20-something struggles, but they also took great care to make sure Diggs and Liu’s tough boss characters weren’t two-dimensional. In regards to Liu’s Kirsten, they wanted to show a character who needed to be tough to succeed in a male-dominated field. “I think about that a lot, especially as a woman in this industry”, says Berman, “because I think there’s a lot of ways, that when you fought really hard to get where we are—as women in entertainment or in any industry—and maybe we have the sense that the people coming up should also have to fight just as hard.” To curb spoilers, Liu’s storyline becomes one that carries a lesson about female mentorship—not necessarily by perfect example, but as an honest one. Liu is, we all agree, incredible and amazing and hilarious.

Director Scanlon praised the gravitas that Liu brought to the role, and how in the brief glimpses we see of her at work we “understand where Kirsten comes from and why she has such a thick skin and why she prioritized her job over a personal life.” It’s advice she’s familiar with. “I barely made it by the skin of my teeth having kids”, she says about the timing, “You know, the fact that I was directing this movie, and I was going to be pregnant is an example of that. So I really, really did relate to that character and someone was telling a story similar to my own on screen.” 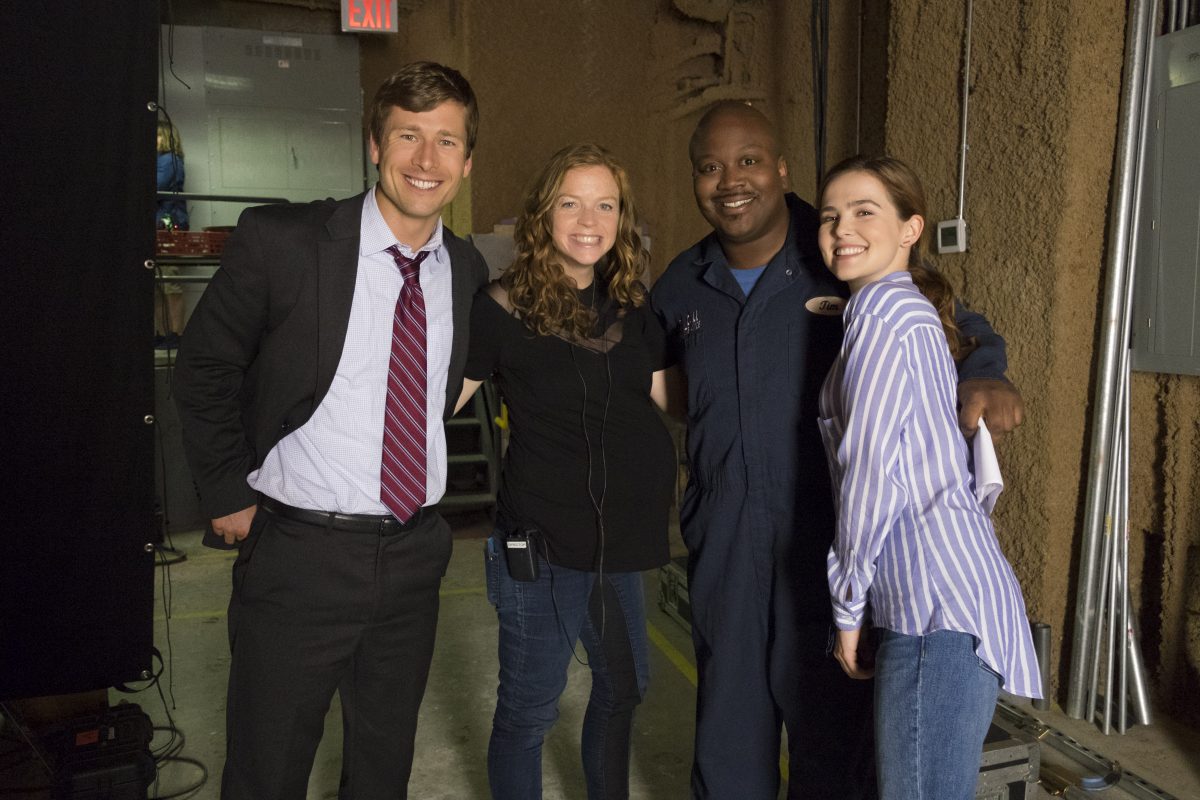 Claire Scanlon and the cast of Set It Up

Bringing back the rom-com, but also paying homage

“I feel like the rom-com fell into a rut”, says Scanlon. ” I feel like people started plugging a formula together and didn’t think about the writing or didn’t think about the characters […] When you have universal issues in your film, it’s very relatable and some of the rom-coms of the aughts forgot about that. They said, ‘Get the guy, get the girl, get them together, they fight, conflict resolved’, but there wasn’t any fleshing out of their world.”

There’s a definite love for the classic, timeless rom-com in Set It Up. For instance, both mention their love for When Harry Met Sally, which makes it unsurprising when you learn Jane Musky was the production designer on both films. The film plays with tropes (airport scene, meet cutes, huge gestures etc.), yet it’s always clear that it comes from a place of love and humor. This is Scanlon’s feature debut, but the director’s work on The Office, Unbreakable Kimmy Schmidt, GLOW, Brooklyn Nine-Nine, Fresh Off the Boat, and tons of other television shows meant she was right at home in creating these comedic scenarios:

“I feel very at home in that world, so especially when it came to casting, I was like, ‘Yes, these are wonderful people but we need comedy drivers as well.’ So getting Pete Davidson, Meredith Hagner, Jon Rudnitsky, of course, Tituss Burgess who I knew from Kimmy Schmidt, Leonard Ouzts, who was on Master of None. All these wonderful people that were willing to play, and it comes through in the film hopefully, how much fun we were having.

The thirst for a fresh rom-com, further fueled not too long ago by a single Chrissy Teigen tweet, is something that the team shared with audiences. “I mean, when I go on Netflix, most of the time I’m looking to watch a big 90s rom-com because there just aren’t enough movies today being made like that”, says Berman, “Some of my favorite movies are When Harry Met Sally or Notting Hill or How to Lose a Guy in 10 Days, and I think that the fact that Katie and I just hunger for those movies in our life, that informed our development of this project.”

One of the biggest gripes people have with shows like Sex in the City or Friends is the completely unrealistic depiction of money and living spaces. Nice apartments for reasonable prices are incredibly difficult!

“We wanted to make [New York] look big and beautiful, but also we wanted to make it look real,” says Berman “and one of the biggest things for us was making sure the apartments felt like real apartments that people would live in. I mean, it was incredibly annoying to shoot in tiny spaces, but we didn’t want it to feel like a big set or like, ‘Oh, yeah. Apartment assistant-making-whatever-a-year. There’s no way I could afford that beautiful huge loft with all the windows and the light and the blah-blah-blah.’ I think you see in a lot of movies that glamorize New York. So we really wanted to make people feel, ‘Oh, there is all this beautiful stuff out there—there’s Bryant Park, there’s the High Line, there’s all this’ but also we wanted to be realistic in terms of where people live.”

Scanlon, who’s from Chicago, spoke about the importance of diversity in her film, something she found lacking in other films that take place in New York City. “One thing that was really important to me was that Manhattan looks like Manhattan”, she says, on making sure that not only the leads but also background scenes reflected the diversity of the city. “It’s important that people are seen and heard, and in a film with lots of women in it, let’s give everyone a voice.”

Set It Up is streaming now on Netflix! It’s a perfect weekend watch, so definitely check it out.