Interview: Long Way North’s Rémi Chayé and Henri Magalon on Capturing Exploration on a Budget and Their New Film 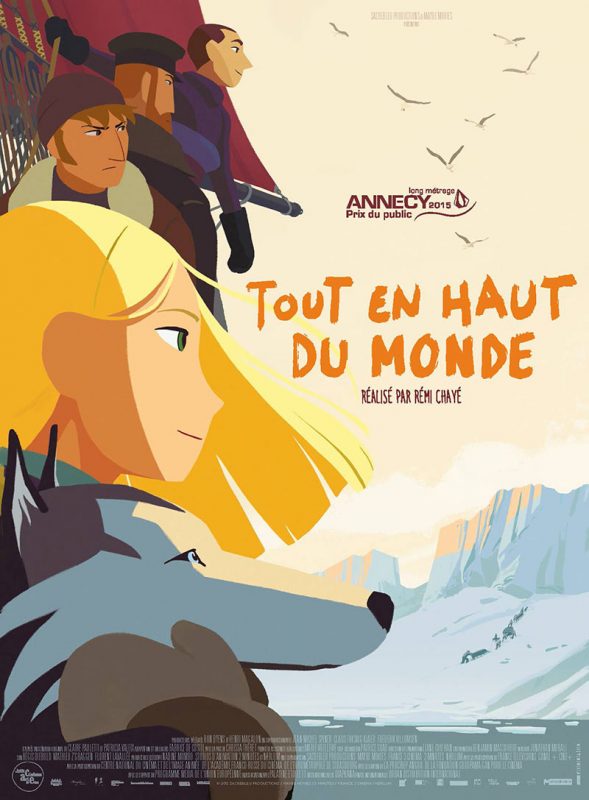 I was a big fan of the French-Danish co-production Long Way North (you can read my review here), so I was very excited to interview director Rémi Chayé and producer Henri Magalon. We spoke about the production of the film and the approaches they took to tell the story of a young Russian girl’s challenging journey to the North Pole.

Over the phone, we discussed how the challenges of having a low budget yielded a distinctive and unique style. We also touched on their new project about Old West hero Calamity Jane, plus what sets their protagonist, Sacha, apart from all the famous explorers we’re used to hearing about.

TMS (Charline): I read a bit about some of the constraints that led to the style used in Long Way North. I was wondering if you could say more that and how you feel it informs the story.

Rémi Chayé: The first one was the budget, we had a really small budget. It was a 5 million dollar budget, 6.4 million euros. We had to be very efficient to do the story. Basically 20 times less than American animation movies. So we had to be quick and we had to be efficient, so the first thing we had to tie up was the story.

And we’ll probably talk about that after, but in the graphic for the image–for the picture itself I decided to remove the outlines to give the movie an original design and it gave us the possibility to open the colors spectrum. That was very nice and it gave us a lot of freedom for the color. And the style because of the budget, I had to remove a lot of the lighting so what we were looking for was the simplicity of the design and so we tried to play with those concepts as much as possible.

Henri Magalon: Rémi is right, we used the Europe and French Academy to do those kind of films we had lots of orders involved, but we raised a 6 million euro budget so we knew that, basically what happened was that we went last year to screenings at big American studios like Pixar, or LAIKA, or Disney and we talked about that, when we told them our budget was 6 million euros they were initially laughing and then when they realized we weren’t joking they were very enthusiastic with us.

And they explained to us how they worked and we knew that in their budget, they were re-doing films several times like 6-7 times, really, the scenes are done a certain way so we knew that for our budget, when we make films we need to anticipate and do things in the right order so we don’t have to waste money and time for scenes. So we worked a lot on the screenplay. We struggled a lot, the wide story before entering production and once we had a powerful character, the right story for her, the whole crew of the team of the film was really gathering around that to make it so we had a pretty, uneventful and very enthusiastic prediction time.

As soon as we got the right story, everybody was defending that. Constraints on the budget became a strength for the whole team to be focused around what Sacha had to lead in the film.

TMS: Did you feel like you related in some ways to the characters as they’re trying to survive, make every bit of food worth it and endure all the obstacles?

Magalon: As a producer I gave some food to the team, but at least they have something to eat! It’s worth the challenge. It was a challenge to do it this way, but basically regarding the budget we had lots of opportunities to raise more money actually to do a big part of the film for instance in Luxembourg or in Quebec in Canada and Asia maybe or Belgium and we eventually decided to do the film for less money–but choose to be all together in the same room. We did lots of the film in Paris, we did half the animation in Denmark, so we had two studios. Rémi was there and he was in the middle of 45 people who were working there and that was a big plus, actually, for us. We realized that we go outside of France a lot and you have to–the overheads are crazy, so we decided to be focused and make a film small budget among ourselves.

We are starting a new film, with the whole team together, everyone–every single one of them. We all want to do another film that same way because, it’s very good.

TMS: That must be exciting.

Magalon: We’re not billionaires now, but we are proud of our films.

Magalon: We actually had a discussion about that, after we finished Long Way North, I spoke to Rémi seeing if you have a new idea, I want to work with you again. Thing is, if you want to do a CGI, like 60 million dollars yeah, I should introduce you to other people. But if you want to do the same way, maybe it would be better, I’m your guy, and Rémi said “No, I don’t want to make a big-budget 3D CGI film,” so we’re on the same page here.

TMS: So Long Way North is based on a lot of the Imperial Trans-Antarctic Expedition, and stories like that are usually all about male explorers but this one has a young girl at the center which I found interesting.

Chayé: I think I really enjoyed the character of Sacha and the way she deals with all this. She knows the North Pole by heart, she knows the North Pole theoretically through books and through the tales and the stories that her grandfather told her during her childhood–and this is the story of the tension that she’s given by her family. And the way she acts, well, she’s a little princess and she has to step down a little bit and to learn life and she has the help of Olga for that.

So what we saw, when we studied the expeditions, like Shackleton, those guys were very stubborn they were often very patriotic. They want to raise the flag of their country and we tried to play with that with a girl who discovers that a human being is more important than the flag. 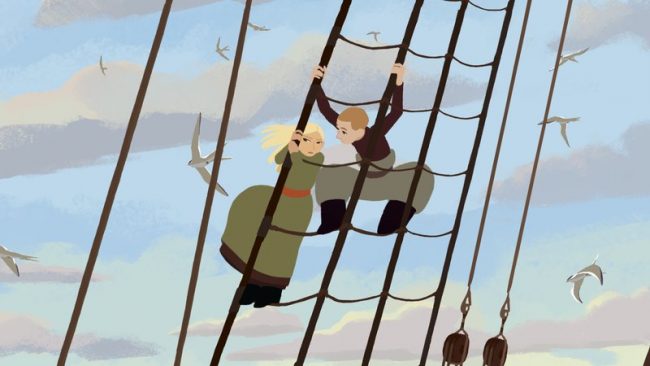 TMS: Do you have many favorite moments in the film?

Chayé: My favorite moment, it’s hard to say. I really like the scene where she goes to the mast with Katch when they climb into the mast.

Magalon: For me that would be the scenes with Olga, the innkeeper where she’s not very welcoming at first, but Olga is taking care of the girl and she’s learning about real life. I think it’s one of the key moments when we start to like Sacha a lot and she starts a new direction.

TMS: Were there any strong influences on the film, either in tonally or thematically?

Magalon: I think with me, there’s a lot of things. We talked a lot about the Jack London books and Jules Verne, and of course the actual real expeditions that took place from the Russian explorers of that period.

Chayé: And for the graphic, the painting, the posters from the companies advertising for nations, join the 40, 50 at the time. That sort of graphic was very important to us and landscape too.

TMS: Long Way North feels very adult in a lot of ways, and dark at times too as a children’s movie.

Chayé: We tried to address kids for Long Way North and we really like that way of doing things to address kids. But we wanted to address them in a clever way, we made the choice to not have a lot of blood or things like this to make sure we address them in the right way. But we expect to rely on the cleverness of the kids and we just tried to, for the parents, to be happy when they’re there with the kids. The story is designed to be addressed to kids but in the best possible way.

Magalon: I’ve been producing animation for a while now, and some people in the industry are telling me, “You are addressing kids, making cartoons for kids. It’s easier, easier than doing films for adults” and actually I’m completely sure now that they’re definitely wrong. Kids are so demanding they have such high expectations for every detail. If anything is wrong you can be sure the kids will blame us for it.

We were very careful to address two kinds of ways to read the film, actually. We did a lot of screening for kids in France and other countries and starting at 5 years old they are so clever. They are so entranced by the story and love it, seeing what’s different from what they’re used to seeing and the parents who are in the theatre who have to watch it with their kids, they won’t think that they’ve sacrificed an hour and half of their life just for the kids. They like the movie also, that’s what we were aiming for and the reaction we had from kids and parents.