Interview: Phil Jimenez Talks About the Rebirth of DC’s Superwoman 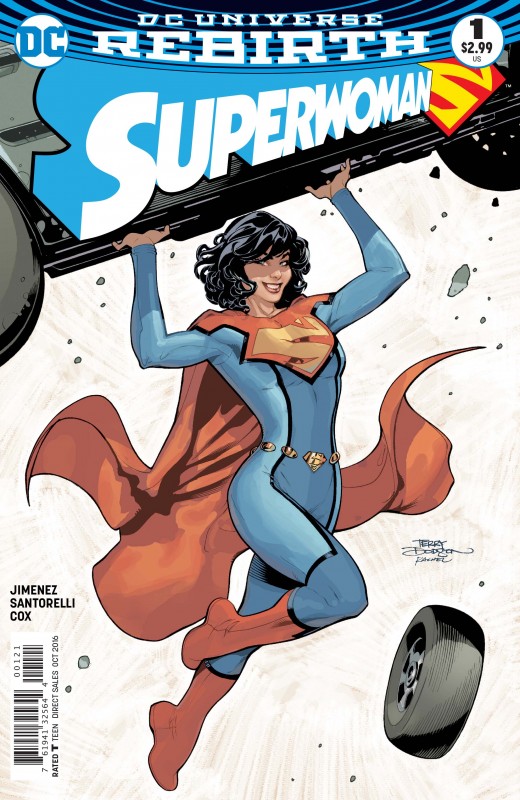 DC’s Rebirth has ushered in some pretty great stories for their female characters. Wonder Woman has been revamped by fan-favorite, Greg Rucka. Supergirl is back thanks to momentum built by her TV show, and she has her own book again (where she’s back in teenage form), written by Steve Orlando. And then there’s Superwoman, written and drawn by Phil Jimenez (with alternating pencils by Emanuela Lupacchino), which debuted last month!

[Beware of SPOILERS if you haven’t read Superwoman #1] 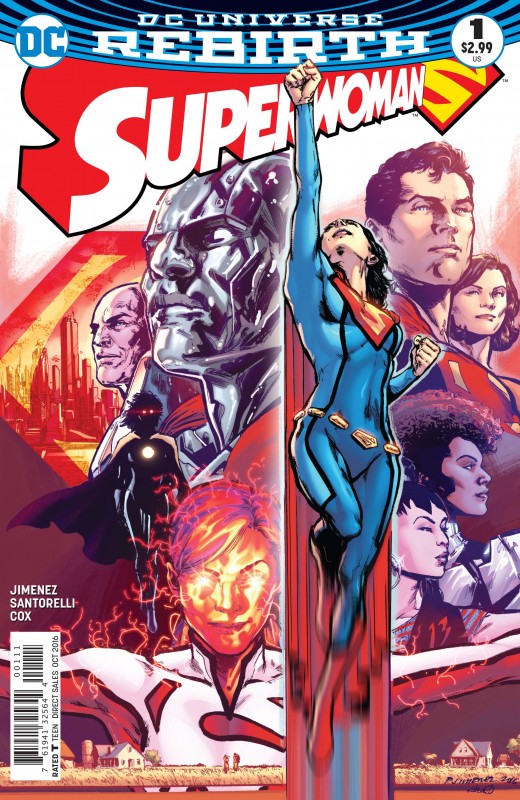 Just so there’s no confusion, this is not the same “Superwoman” that you might know from Supergirl comics. This Superwoman is actually another character all together. Actually, another two characters all together. Here’s a synopsis of Issue #1 from DC Comics, which was released August 10th:

In SUPERWOMAN #1, following the events of the death of Superman, other supers have taken on the mantle: Lex Luthor, a secret Superman from another world, a New Super-Man and now… Lois Lane. But she’s not the only one. Lana Lang and Lois Lane were blasted with Superman’s energy and have now been imbued with his powers. Together they are the Superwomen! The two women, determined to uphold Clark’s legacy, begin to work together, even as the powers are beginning to kill them. Then, when a Luthor battle cruiser is attacked they zoom into action—but neither could understand the consequences until it was too late.

Issue #2 only ups the ante story-wise, and allows us to explore how Lana Lang, a human who has suffered a great deal of loss, handles her newfound powers and, similarly to Supergirl, overcomes darkness and loss to find her heroism.

I had the chance to speak with Phil Jimenez about how he came to write Superwoman’s new ongoing comic, and how he relates to it on a personal level.

Teresa Jusino (TMS): Let’s start with how you got involved, and what made you take on this particular book?

Phil Jimenez: The short version is that almost a year ago I started talking to Dan DiDio again about working at DC Comics. I’d originally been assigned [to be] the artist of Superman, and for about three or four weeks we were talking, plotting, etc. Then DC changed their publishing plan, decided they were gonna do some biweekly books, [we were both] through [on Superman], but I was still interested in working on a “Super” project. Then they generated Superwoman, and said ‘Here!’ And that’s literally how I got it. They said ‘We want you to write and draw it. These are your characters. Go!” Suddenly, I was in charge of the destiny of these particular characters. 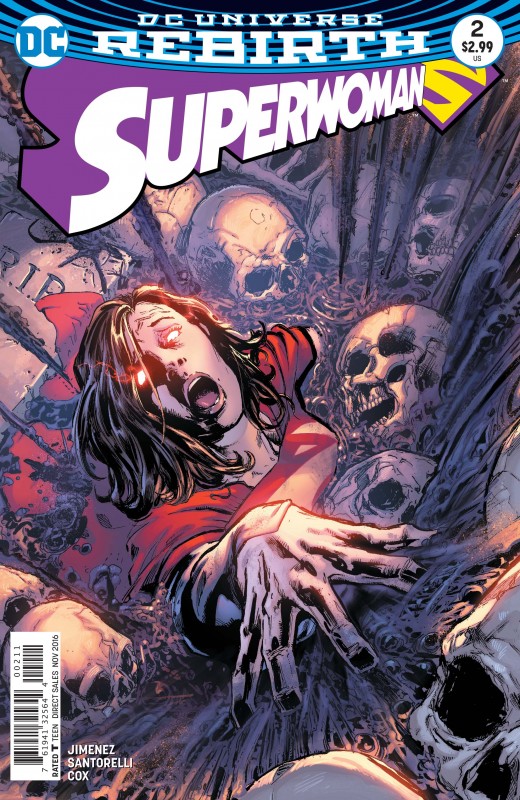 Jimenez: No pressure! I will say that the nice thing is that Geoff Johns, who’s been a really important part of Rebirth and its success, helped me early on in beating out a couple of story arcs, and we talked very clearly about certain beats to hit, what needed to happen, what the company wanted, and he was very, very supportive of me in those early days. So, his handprint has been on so many books, including this one. And I’m actually grateful for it. But basically, this is me.

TMS: And you’re both writing and drawing the book, correct?

Jimenez: Yes. But we do have a rotating artist, Emanuela Lupacchino. It’s sort of like two-on, two-off, and then I’m doing three, and she’ll do two, which is great for a couple of reasons. First, it’s great to have her artistic voice on the book. And it’s allowed me to breathe a little bit! I haven’t done a monthly book in years. I was never actually very good at monthlies, so I don’t know what DC Comics was thinking. [laughs] But I believe we’ve come up with a nice rhythm, so we’re both working at the same time on multiple issues.

TMS: Why have two superwomen? You could easily have powers granted to either Lois Lane or Lana Lang and have a wealth of stories there. What was important to you about having it happen to both of them?

Jimenez: That’s actually a great question. I love the idea that not one, but two characters can hold a mantle. I think it hearkens back to Wonder Woman, the idea that “We’re all Wonder Woman,” or “We’re All Superwoman.” Part of it was a little nod to Superman: Red and Superman: Blue. And I knew that I wanted a team. I didn’t want one character or the other. And I thought it would be a nice surprise. Like, all of a sudden a second one pops up, and people are like ‘Whoa! There’s two of them!’

I like the idea that eventually, there could be even more than one or two. There could be a whole slew of Superwomen. I liked the idea of a team of these characters. Particularly characters who in print have not been friendly to each other. That was important, too, because the underlying theme of my work on this book is ‘We can all be great to each other, we can be good to each other, even if we don’t like each other.’ And I wanted a team of characters that might not have a great past, but could have a great future together working together, even if they don’t always get along.

Jimenez: I’ll tell you what I was more interested in exploring with Lana particularly, more than Lois. Lana I tend to think of historically as having as malleable a personality as Lois, but what I found really interesting about the New 52 version is that she actually sustains an enormous amount of loss. Her parents have died, Superman had died, I gave her a brother who died, and then her partner died. And what interested me about that, and this is over a very short period of time, what interested me about that was anxiety and panic.

I was having panic attacks after my mother died, and I had spoken to other friends that were having real anxiety issues, and I talked to a therapist about it. Anxiety is all linked to mortality and the fear of loss, and anxiety of lack of control when you think you’re losing something, especially your life. So, the appealing thing about Lana, quite frankly, is you had this hardcore — especially the New 52 version, which Greg Pak molded and formed — she was a go-getter, an adventurer, she never looked back. People who do that tend not to be very inward-looking.

Pak even said that ‘Lana Lang doesn’t cry.’ And I thought there was something really interesting in that. A person who looks forward, who never looks back, because looking back might actually slow her down. Contemplating would actually cause her a lot of pain and hurt.

TMS: Let’s talk female villains! We need more of those, and love seeing that. While we increasingly have female heroes, female villains are equally important. I’d love to hear you talk about female villains, especially with regard to Issue #2 and the big reveal there.

Jimenez:   The thing that I loved about as a villain is a) I agree. I think generally there need to be more female villains who aren’t sexually charged, that are not driven by a desire to have babies with the lead. is that in-story we were able to find everything we needed for motivation. People will totally get it, and I think women will in particular.

I love it, because it’s kind of high soap opera. It’s big and dramatic, and she swoops in and says ‘I’ll destroy you!’ But at the root of it is a motivation that I think people will totally get, and I think women particularly identify with. I’m a dude, so I don’t know if that’s true, but I believe that’s true. And the bigger she gets, she is as menacing as any of the top male villains DC or Marvel has, and that was the point.

And she’s a science-based character. What we’re working really hard on is creating a thematic though-line throughout this book that almost all the lead characters in this book are science-based.

Superwoman #2 will be available this week on Wednesday, September 14th.